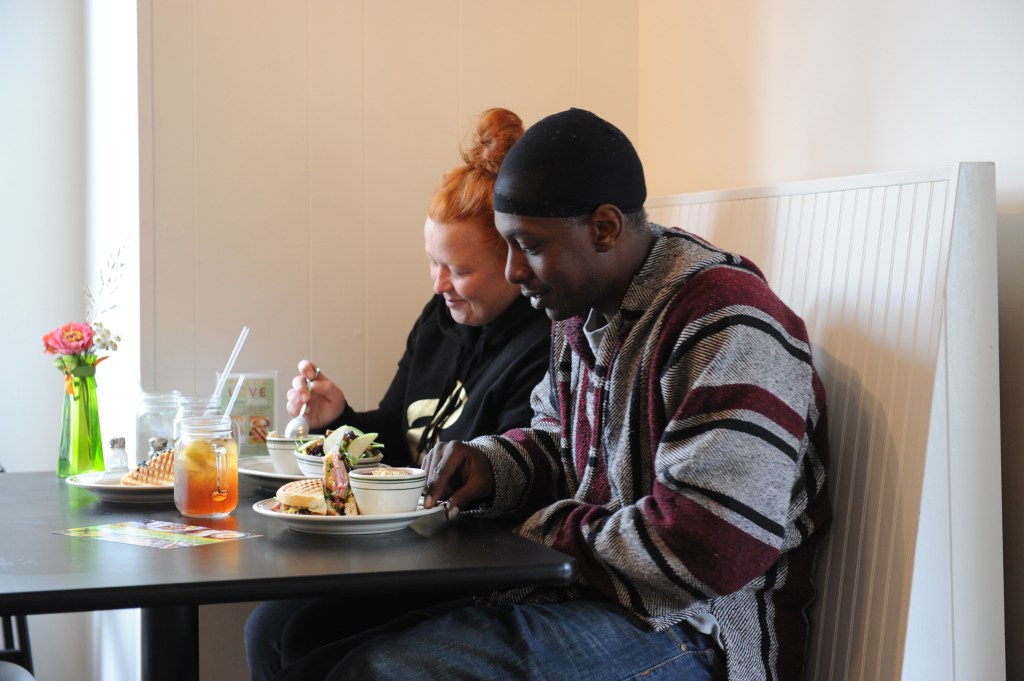 Photo by Nick Lacy Patrons eat a meal at Grace Café in Danville.

Grace Café, a pay-what-you-can restaurant on Fourth Street in Danville will be adding Monday and Tuesday lunch service from 11 a.m. to 2 p.m. starting on Monday, Oct. 17.

According to the restaurant, it is Kentucky’s first nonprofit pay-what-you-can community café and has a mission to end hunger and food insecurity in Boyle County.

“This summer, we have seen more and more people relying on the café to stretch their food budgets, access healthier food, and often it’s the only meal some folks get that day,” said Rochelle Bayless, founder and executive director. “Last month alone we had 30 unduplicated volunteers working a total of 101 hours in exchange for a meal. That’s up 57 percent from August and 114 percent from July. And that’s only the people we can track.”

Since opening in July  2015, Grace Café has served a total of 23,515 meals and has invested more than $23,961.00 in local agriculture by buying direct from local farmers, growers and artesian producers, according to the restaurant.

“This is critically important to our mission,” said Daniel Kirchner, the café’s board president and professor of philosophy at Centre College. “Grace Café succeeds by closing the loop between the needs of food producers and the needs of consumers in our local area. We by-pass the industrial food system that produces unhealthy food and fills the pockets of corporations and we develop independence from reliance on institutional food charity.

“But to effectively achieve the closing of the loop, we need to be able to assure local farmers that they will have a market for their products, and we need to provide community members who are food insecure a consistent and reliable source for healthy food.”

According to Feeding America’s Map the Gap 2015 report, 17.1 percent, or 4,920 people, are considered food insecure in Boyle County. Slightly more than 18 percent live below the federal poverty level, which is defined as a family of four living on a yearly income of about $31,000.

In Danville, one in four residents is considered food insecure, including 25 percent of children, according to Kentucky Health Rankings.

“These are the people Grace Café strives to serve in the community by providing a viable, dignified means for hunger relief,” Bayless said. “Food insecurity is a fancy term the USDA created to describe someone who is worried about how they are going to feed themselves or their families. When folks have to make hard choices with little resources, food is often a last priority. When money is tight, people will seek out the cheapest calorie they can find. And, those calories come in the form of processed foods, fast foods — foods high in saturated fat, sugar and preservatives. All of which contribute to poor health, low energy, low productivity and ultimately, higher health care costs for everyone.”