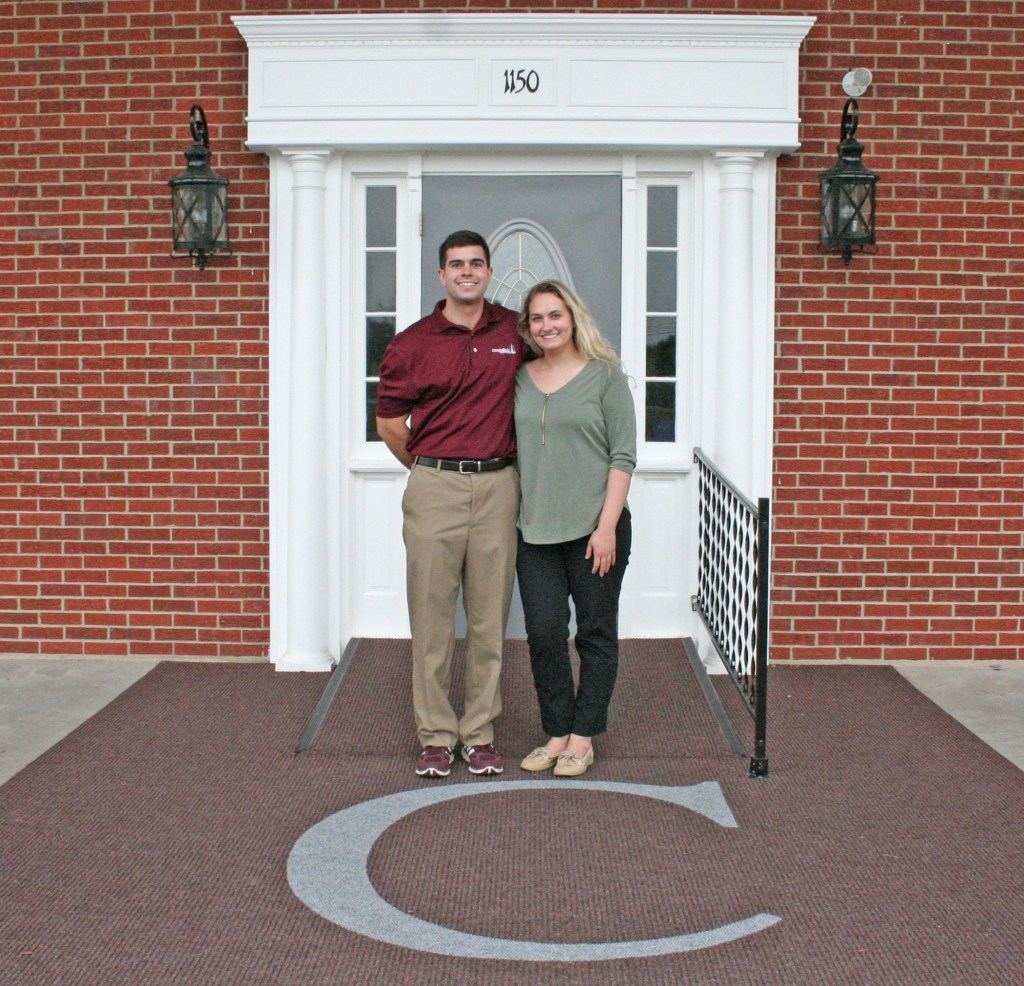 Kendra Peek/kendra.peek@amnews.com Wesley Carter, along with his girlfriend and coworker, Ariel Darnell, at the Harrodsburg campus of Campbellsville College.

“I truly believe that everybody has tremendous human capital. Everybody has a tremendous amount of potential. They only need the help of others to unlock it. And a great avenue to do that is in a higher education environment,” Carter said.

A native of Knoxville, Carter is the regional director of church development and outreach through Campbellsville University. That requires him to spend time at each of the four regional centers in Harrodsburg, Hodgenville, Lousville and Somerset, which includes 900 students.

During the school year, the university has 70 students employed in church outreach who receive a $1,600 per semester stipend. In the summer, 35 students are employed the same way. And more than 500 students volunteer their efforts for free.

On average, that looks like about 55 students on eight teams, spending their Sundays leading church services in Kentucky, Indiana, Ohio, West Virginia and Tennessee.

Carter is a full-time faculty in the school of business and in the school of theology, holding the title of assistant professor and teaching at least eight classes a year, some on the main campus with a co-teacher.

“I love my job. Every day I do something different,” he said.

He joined the Campbellsville family when, in 1999, his dad became the president of the university.

“I was nine-years-old. I grew up on the campus of Campbellsville University,” he said.

When Carter graduated from high school, he started at Georgetown College, where he played golf, a sport he started at the age of 12. After a year there, he decided to head to California and attend California Baptist University.

Along the way, he “finally surrendered to the Lord,” and his future changed drastically.

“It was a valiant fight, but Jesus always wins — thank goodness. That really changed the pathway of my life. I was getting ready to start law school at Northern Kentucky University. When I became a Christian, I immediately started a master’s degree of theology,” Carter said.

Carter graduated in 2013 from Campbellsville with a bachelor’s of science. He stuck around, obtaining his master’s in business administration, a master’s of theology, and a master’s in management and leadership, all from the university. He’s a published writer in Baptist History and Heritage Journal, a peer reviewed journal, writing “C.T. Vivian: A Champion for Civil Rights.”

He is now working on a master’s degree in divinity from the Baptist Seminary of Kentucky and a doctorate of business administration from Walden University. He has almost completed the doctorate and only needs to complete his dissertation on the “Relationship Between Traditional Marketing, Social Media Marketing and Alumni Financial Support at Colleges and Universities.”

One of the other things he does regularly is public speaking and preaching. Carter also spends his free time serving on various boards around the state and the nation, such as the Cooperative Baptist Fellowship, the Isaiah House, the Wilderness Trace YMCA “C” steering committee, the Mercer Transformation Board and Ignite America.

“I truly believe we should help as many people as we can and that education is one of the most important pathways to a higher quality of living.” 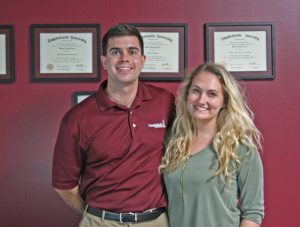 Kendra Peek/kendra.peek@amnews.com
Wesley Carter, along with his girlfriend and coworker, Ariel Darnell, at the Harrodsburg campus of Campbellsville College.

Campbellsville University is also how he met his girlfriend of two years, Ariel Darnell.

“On Nov. 1 will be our two-year anniversary. I’m very fortunate to have Ariel,” Carter said. “At one point and time, I thought I was going to get a master’s degree in marriage and family therapy. I took one class, and I dropped the master’s degree and picked up Ariel.”

Darnell is a fellow master’s student and professor. She spends much of her time at the Harrodsburg office. They also have a dog, Shirley, a mini dachshund who visits the office, where she has her own bed.

Carter’s dad, Michael Carter, is still the president of Campbellsville University; his mom, Debbie, is a retired professor of sociology and continues to practice; and his brother is also employed at the school. He has a sister who is an elementary school teacher in Tennessee. That family connection, he said, doesn’t make things any easier on him — in fact, he argues, it makes him strive harder.

“My dad being president makes me want to work harder, faster, leaner, stronger, so no one can say I only have it because of him,” Carter said.

He said his dad is a big influence on his life and he’s thankful for his parents, who make a point of visiting the Harrodsburg campus regularly.

Carter quotes two verses as two of his other inspirations: 2 Corinthians 4:17, which adorns a marker board in his office; and John 16:33.

Above all, Carter said he is “blessed” by what he is able to do, but knows that he still has his shortcomings.

“I love my job. I love that every day I do something different. Every day I have the opportunity to interact with people and help other people,” Carter said. “I still have a lot of work to do.”