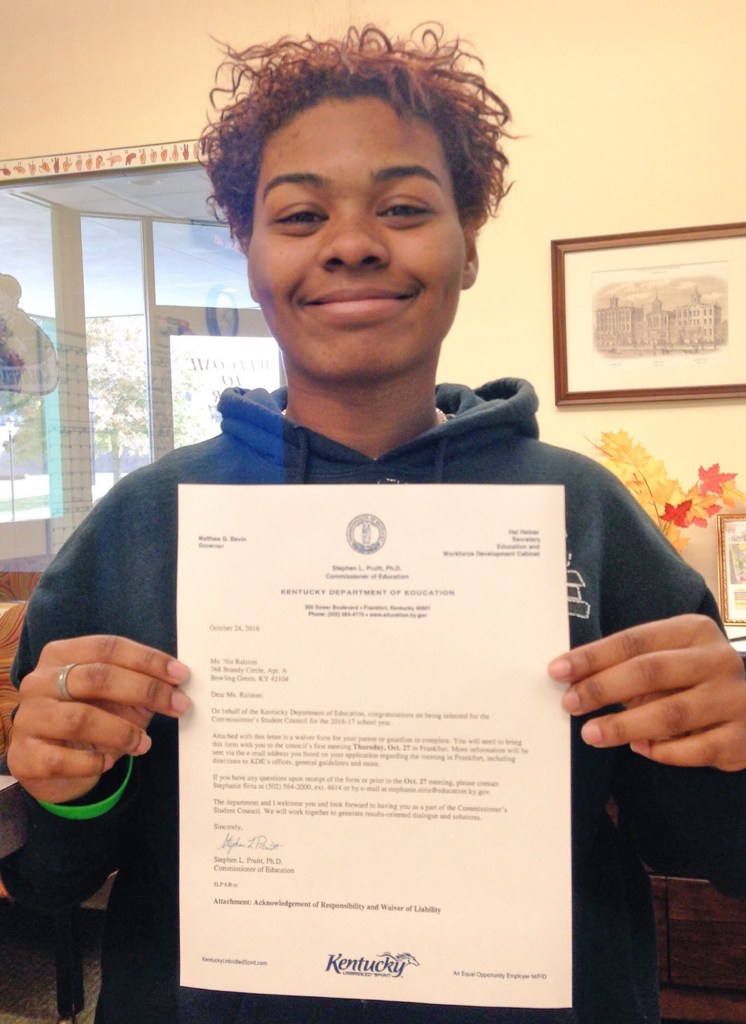 Photo submitted Nia Ralston is a student from the Kentucky School for the Deaf who was selected to be on the Education Commissioner's Student Advisory Council.

A Kentucky School for the Deaf student will get to share her opinions with the top education official in the state after being appointed to serve as a member of the Kentucky Commissioner of Education’s Student Advisory Council.

“I get to be my school’s voice,” Nia Ralston said.

Ralston is one of 16 new students on the council who are joining seven returning members. The council provides input to the Kentucky Commissioner of Education on educational issues. As a senior, Ralston will serve one year on the council.

Ralston said her involvement has given her a new appreciation for the teachers and administrators.

“I get to meet the commissioner and understand from both sides — the teacher and administration side and, at the same time, the student side. … we learned a lot,” she said. “We learned how much stress our teachers and administrators go through just by having to teach what’s on the standardized tests.”

“That was good. I have a new appreciation for teachers,” she said.

Nia, along with others at the school, was encouraged to submit her application, which included essay questions, and one about why she was qualified for the council.

“I’m very outspoken. I’m loud; my energy’s loud. I thought I would be a good person to come from my school to help make sure that these kids are getting what they need and what they want and to see how we can make it a better place,” she said.

That’s one of the strengths about council, Nia said: The student members can talk to Commissioner of Education Stephen L. Pruitt about any problems a school might be facing and see what has or has not worked at other schools. It also gives her the chance to share any solutions that have been found at KSD.

This year’s council had their first meeting last week. Ralston said it was a very interesting, but slightly nerve-racking experience.

“It was weird. You have different people from different counties … it was definitely a new experience,” she said. “It was awkward. But then I got used to it.”

Ralston has been a student at the Kentucky School for the Deaf for seven years and said it’s been that long since she’s really been around students at other schools.

There’s a lot of similarities between a public school and a semi-private school such as KSD, but the biggest difference is the world of communication that is opened up at the Kentucky School for the Deaf.

“Many people think here we have it easy, but it’s like every other school in Kentucky. You have your social clubs, you have your sports, you have your drama. We have pretty much what every school has, but we have more access to communication,” Nia said. The only other difference is that the students at other schools go home every day, while students from KSD do not. There’s not much different.”

Nia spent part of her childhood in western Kentucky and part of it in North Carolina. She didn’t know about KSD until just over seven years ago, just before starting at the school. It made a lot of difference.

“I did not have access to communications. I would not say I lacked it, but it was more of a struggle,” she said. But being at KSD opened up all new avenues of communication for her and all of her classmates —and it can do the same for other students, she said.

“We have a lot of smart kids. We need to expand. We need students to come,” she said. “This is the most amazing school.”

KSD has a large number of students with international backgrounds, adding to the school’s unique culture, she said.

At the first council meeting, it turned out Ralston’s reputation as the “Selfie Queen” at KSD had proceeded her. Commissioner Pruitt insisted on taking a photo with her. That helped put her a little more at ease.

“I was so not expecting that,” she said laughing.

Ralston is able to communicate fairly easily without the use of an interpreter, but she did have a teacher with her, in case additional clarification was needed.

“I spoke for myself,” she said.

Besides her new role on the state council, Ralston is also a member of the academic team at KSD, which has allowed her to travel around the country to compete with her team against other deaf schools.

Ralston said she enjoys history and English as two of her favorite topics in school. A self-proclaimed “history freak,” she said she would pick social studies if it came down to selecting her favorite.

“I love history, I breathe history. At the same time, I love English, too,” she said.

Ralston credits her mom, Carmen, and her teacher, Paula Mackie, for that. She said it was her mom who helped her learn more about her own culture and that piqued her interest in the subject.

“My mom plays a big role in that,” she said.

It was Mackie who helped the teen find an interest in government.

“If I didn’t have her, I wouldn’t be on student council at all,” Ralston said.

Nia wants to attend Gallaudet University or Howard University for a pre-law degree. She hopes to become a lawyer. She hasn’t picked a specific area of law, although she said many think she needs to become a district attorney or some other type of attorney. Nia said she has an interest in working with those facing death row, but she isn’t sure.

“I don’t know what the future holds,” she said.

For more information on the Commissioner of Education’s Student Advisory Council, including a complete list of members, visit bit.ly/2eZFdMM.

Boyle County High School senior Wesley Wei is also serving on the council for his second year. Wei was featured in a November 2015 article in The Advocate-Messenger.