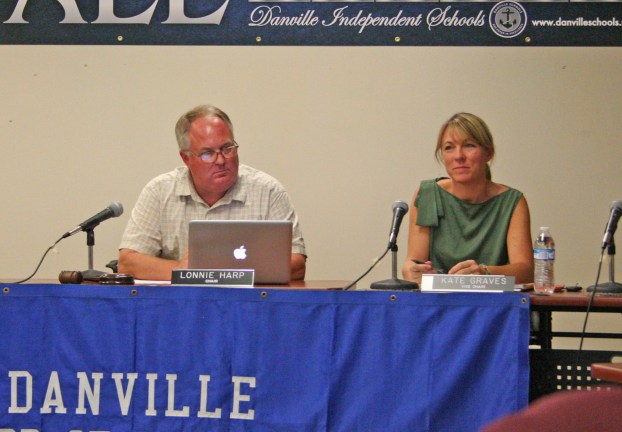 Kendra Peek/kendra.peek@amnews.com Chairperson Lonnie Harp, left, and Vice Chair Kate Graves, right, will complete their terms at the end of this year. They are seen in his photo from the August meeting of the Danville Board of Education.

Members of the Danville Board of Education took the next step in restructuring the district’s elementary schools Monday night, approving the district facility plan and scheduling a public hearing at the Danville High School on the matter for 5:30 p.m. Thursday.

“The Local Planning Committee worked hard and diligently. It was a good process,” said Ed McKinney, director of pupil personnel. “These decisions are tough.”

McKinney publicly thanked all of those who served as members of the Local Planning Committee.

A public hearing is the next formal step in the process. It’s an opportunity for people to hear the plan and speak, although the decision will likely remain unchanged at this point, McKinney said. 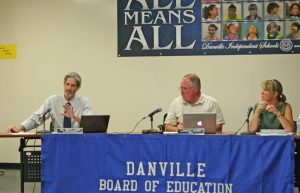 Kendra Peek/kendra.peek@amnews.com
Chairperson Lonnie Harp, center, and Vice Chair Kate Graves, right, will complete their terms at the end of this year. They are seen in his photo from the August meeting of the Danville Board of Education.

The board will follow the hearing on Thursday with a special-called meeting at 2:30 p.m. on Friday at the current Danville central office on the campus of the Kentucky School for the Deaf. If approved on Friday, the plan will be submitted to the Kentucky Board of Education to be voted upon at its February meeting.

Also during the meeting, board members Lonnie Harp and Kate Graves publicly thanked their current and previous board members for having served with them. Their terms are ending this year.

“It has been an honor to serve,” Graves said.

Editor’s note:Taken from the Danville 911 records, the Police Blotter represents a history of the initial calls and the information... read more