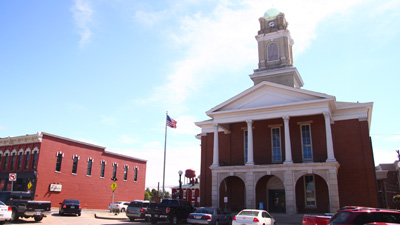 LANCASTER — Garrard’s judge-executive says a new “unified strategy” with its policing force will save money in the county, as well as draw better applicants.

Davis said they are working out whether or not the county police force will be legally permitted to serve papers on individuals, something that ordinarily falls under the jurisdiction of the sheriff’s department.

“There’s a whole lot still to get worked out pretty fast,” he said.

Davis will also maintain his authority to patrol, make arrests and do anything in law enforcement.

The change is merely a way to save and reallocate funds, Judge-Executive John Wilson said. The sheriff’s department will be saving funds since it will no longer handle most inmate transports (which are not court-involved), which are being taken on by the Lancaster Police Department. That money saved will be reallocated to the newly forwmed county police department.

The sheriff’s department, which currently has four road deputies, is at a “critical level,” according to Wilson, and he says this plan will help.

The newly-sworn officers will essentially become county employees, answering to Deputy Tevis Graham, who will be department head. Wilson will manage the budget and other day-to-day affairs as with other county departments.

The change allows the officers to be on the county’s insurance plan, something that makes it a bit more enticing to potential hires. The county is currently searching for two new officers.

The change is partly due to the county’s search to hire more deputies, but only uncertified individuals had applied. Hopefully, with the change in benefits, the department will draw more certified applicants.

“We’ve had some luck,” he said, of interested applicants. Wilson said he’s heard from law enforcement officers in neighboring counties who are interested in applying for the new positions.

The department will work closely with the Lancaster Police Department and Chief Rodney Kidd, but  will remain two separate agencies.

“They will compliment each other,” Wilson said. “Lancaster Chief (Kidd), I and Tevis Graham have been meeting to work together.”

They are working on a “unified strategy” to approach problems in the community, he said. For instance, they may choose to cite someone instead of arresting them for certain violations, which saves money. The money which would normally be used to pay for a person’s jail time can be used to help combat the drug epidemic in the county, Wilson said.

Davis said he’s “being supportive” of the plan.

“The county police force is something that the judge-executive can start based on the fiscal court voting to do that. They decided to do that. I’m being supportive of them and trying to help how I can.”

Everything is ready, Wilson said, for Thursday, the day the county will have second reading on the fee pooling ordinance, which will allow the county to use funds collected through the sheriff’s department.

“Everything else is done. We’ve gotten authorization through the FBI and the state to create a police department. We’re ready,” Wilson said.

At the meeting, all the deputies will resign from the sheriff’s department and be sworn in as officers of the Garrard County Police Department.