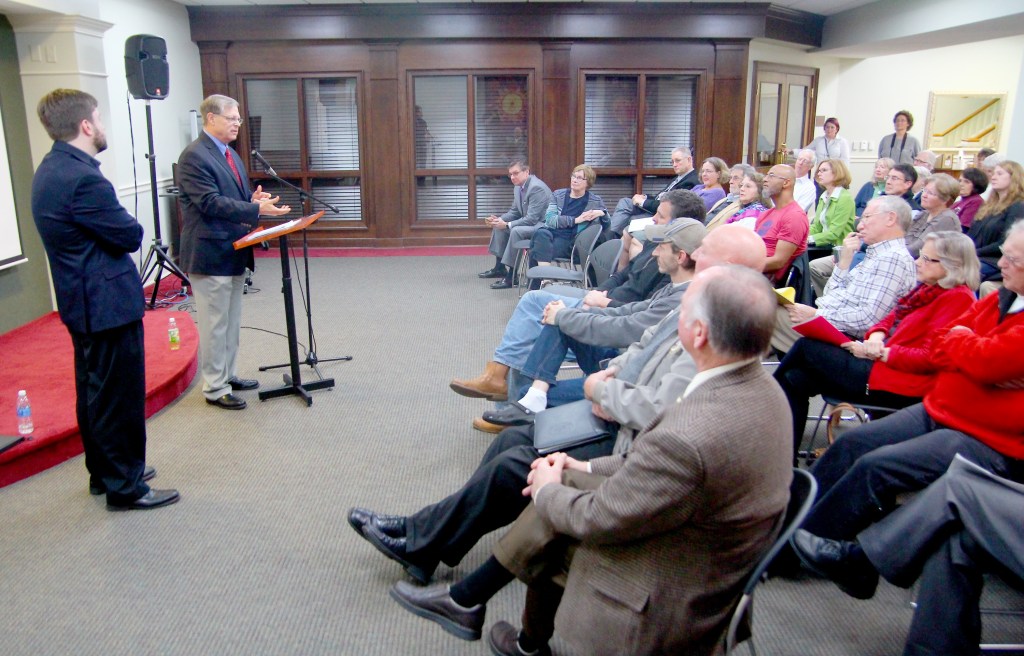 Boyle’s state representative and senator participated in a robust town hall meeting Tuesday, where constituents questioned them on several state issues and voiced their opinions on many topics.

The most heated topics included the recent bills passed by the Republican-controlled legislature that restrict abortion access and unions. 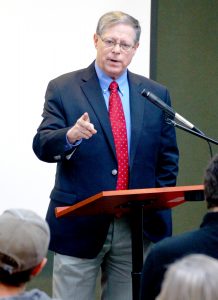 Sen. Rick Girdler (R-Somerset) said he is hopeful that President-elect Donald Trump will help bring about the overturning of the Roe v. Wade Supreme Court decision that legalized abortion in the U.S. Later in the meeting, Rep. Daniel Elliott (R-Danville) said he would like to see the women’s health organization Planned Parenthood defunded. Both statements were met with demands from the audience as to why the officials wanted to take healthcare rights away from women.

On the issue of labor unions, both Girdler and Elliott said they support the recent bills that have been passed into law making union membership at unionized workplaces voluntary and limiting the ability of unions to collect and use dues from members. 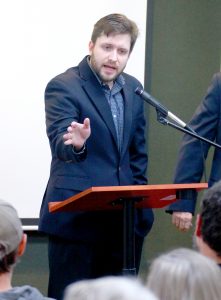 Multiple members of the audience said evidence from other states that have passed similar legislation has shown wages go down and workplaces become less safe. Elliott and Girdler said they voted for the legislation because they believe it will help bring more jobs to Kentucky. They also said they would be willing to repeal the legislation if it doesn’t work.

“We can see if this works or not. If it doesn’t, we can repeal it,” Elliott said.

“Our hope is that this … bill will make Kentucky more attractive for jobs and if it doesn’t, we’ll stand corrected and we’ll go back,” Girdler said.

At the local level, Boyle County Treasurer Mary Conley asked the elected officials to be aware of a problem with how state retirement works that is leaving small counties on the hook for up to $10,000 or $20,000 payments they weren’t expecting. Conley said under the current system, counties can wind up paying “spiking” fees into the retirement system. Often, those fees can hurt small counties with small budgets, she said.

Sen. Jimmy Higdon (R-Lebanon), who agreed to facilitate the meeting due to Elliott and Girdler both being relatively new members of the legislature, said state legislators are aware of what’s going on and bills have been filed in the past concerning the issue.

“None have passed, but there’s been a lot of discussion,” Higdon said.

U of L Board of Trustees

Attendees were critical of the legislature’s passage of a bill that abolishes and replaces the University of Louisville’s board of trustees. The move raised questions over U of L’s accreditation because board members are not supposed to be able to be removed without cause.

Elliott was also critical of how Gov. Matt Bevin attempted to change the makeup of the board on his own.

Elliott said he supports the idea of reforming how civil lawsuits are handled but acknowledged that individuals have a constitutional right to a trial by jury.

One bill before the legislature this year would create medical review panels of doctors who would review medical lawsuits before they could be filed. Elliott did not take a “for” or “against” stance on the bill, but acknowledged there were potential issues with it as it’s currently written.

Elliott said there’s a problem with only doctors serving on review boards for lawsuits filed against doctors. Noelker asked why reforms should only apply to cases involving medical malpractice and not to all civil cases. Elliott said Noelker made a “good point” that was a “good argument” against the bill as it stands currently.

• Elliott and Girdler were asked by one attendee, a former teacher, where they stood on charter schools. Such schools can be “done wrong” or “done right,” the woman said, but in her experience, charter schools work best when they’re run by local school boards.

Elliott said he doesn’t see a benefit — to Boyle or Casey counties — of a charter school, but it could be beneficial for urban areas such as Jefferson County.

• Local attorney Mark Morgan asked Elliott and Girdler to use whatever contacts they have to push for “clear vetting” of cabinet-level appointees from Trump. Elliott said he takes confirmations “very seriously” and “will be glad” to take Morgan’s message to Kentucky’s U.S. senators, Mitch McConnell and Rand Paul.

•  Danville City Manager Ron Scott asked about the potential for expanding which cities have access to a restaurant tax in Kentucky. Currently, many bigger cities such as Danville do not have the ability to impose a restaurant tax, but cities of a certain size, such as Harrodsburg, can and have implemented a tax.

Elliott said it’s possible an expansion of restaurant tax eligibility could be included in a tax-reform bill later this year. The current setup “seems to be a fundamental unfairness to a city like Danville when you compare it to Harrodsburg,” he said.

The town hall was held at the Boyle County Public Library and lasted a little less than two hours.