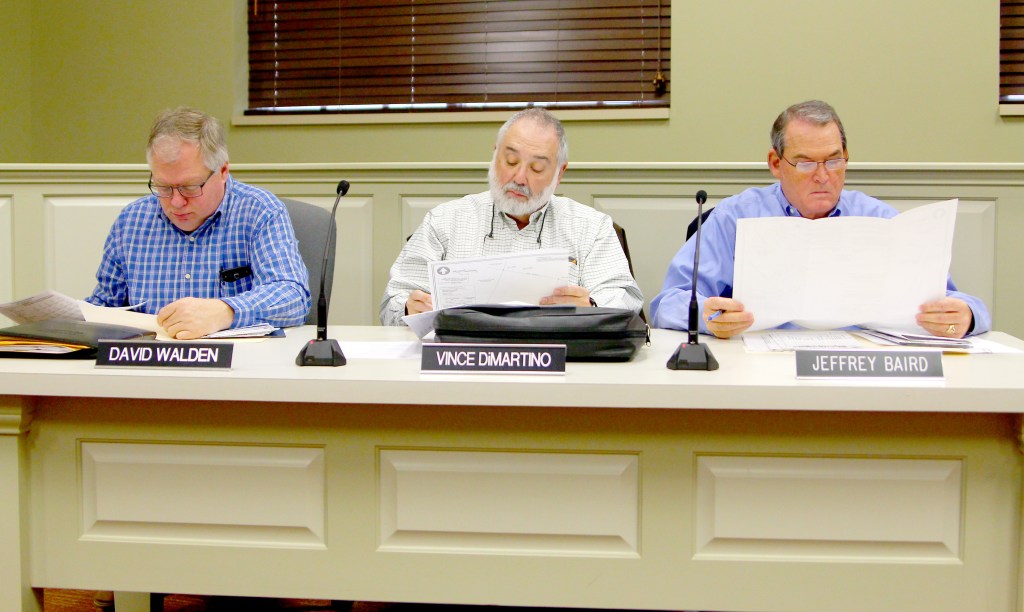 Danville-Boyle County Planning and Zoning has approved a zone change that would allow the inflatables business Party On Air to expand at its current Whirlaway Drive location.

Commissioners voted unanimously in favor of changing the zone for a property behind Party On Air from multi-family “NCC” to commercial “H-C.”

Attorney Tom Hensley told commissioners his client, Party On Air owner Ashely Wesley, has a contract to buy the property contingent on the zone change.

Wesley said business is booming for Party On Air. 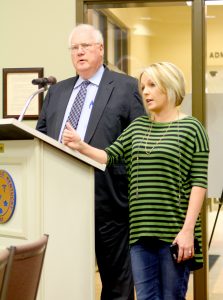 Ben Kleppinger/ben.kleppinger@amnews.com |
Party On Air owner Ashley Wesley, right, and her attorney, Tom Hensley, speak to commissioners about a potential zone change that would allow Wesley’s business to expand.

“We have kind of outgrown our current facility that we’re in, so we’re wanting to expand into a bigger building,” she said. After the meeting, Wesley said she hopes to be able to build a new facility that will offer attractions for older kids.

Party On Air, which Wesley runs with her husband, Joe, opened in August of 2014.

The property Wesley hopes to expand onto has an address on War Admiral Road, which is currently a residential neighborhood. The conceptual plan for the property calls for construction of a building and a parking lot that would be accessed from the business’ Whirlaway Drive entrance.

Hensley said Wesley has spoken with every adjoining property owner and none of them had objections to her plan.

“If you see what can be done with it in its present zoning and you see what Ms. Wesley wants to do with it in her conceptual plan, I think you can see why the neighbors are in favor of it instead of a multi-family plan,” Hensley said.

There are already multi-family dwellings along War Admiral Road, and residents would rather have a single commercial building accessed from another road than have up to 34 more apartments on their road, Hensley said.

No neighbors attended the planning and zoning meeting to support the zone change, but Wesley read two letters from neighbors she had talked to expressing support.

Hensley said the zone change would be in-line with the commission’s future land use plans because when the property in question was originally zoned “NCC,” it was a multi-purpose zone that allowed for residential and small commercial development.

The “NCC” zone was later modified to only allow for residential development, perhaps in an effort to protect older neighborhoods from commercial development, Hensley said. But in the case of the War Admiral Road property, the changes didn’t protect an old neighborhood, but just limited the uses of the property, he argued. 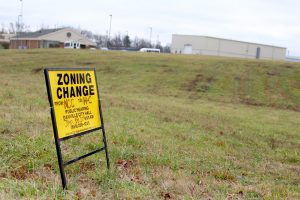 Ben Kleppinger/ben.kleppinger@amnews.com |
A sign at 109 War Admiral Road announces the plan for a zone change that would allow Party On Air to expand. Visible across the property in the back right is the back of Party On Air.

P&Z Attorney Bruce Smith said because Hensley had already presented findings concerning the change, the commission was legally allowed to approve without requesting further findings. Smith noted Hensley would not have looked for any findings that would hurt Wesley’s case.

Commissioner Jeffrey Baird made the motion to approve the zone change.

“The neighbors are OK with it; it seems pretty cut and dry to me,” he said.

Commissioner Terry Manon seconded the motion and the commissioners all voted in favor.

The zone change will next go to Danville City Commission for approval, then Planning and Zoning would need to approve a site plan before construction permits would be issued.

• approved a site plan for an outpatient healthcare facility on Hustonville Road in the old Bottle Shop building near the Danville Bypass; and

• approved creating a separate tract for future development on the north end of the Commonwealth Cancer Center property along the Danville Bypass.