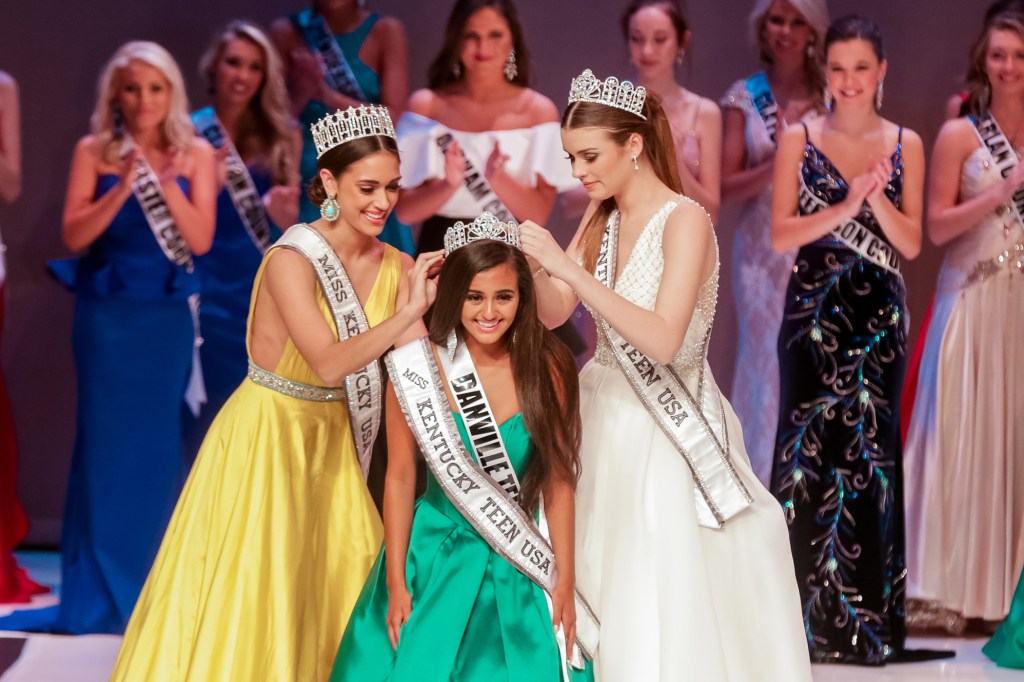 One of Danville’s own has a shot of making it on the national stage, in more ways than one.

Olivia Prewitt, 18, was crowned Miss Kentucky Teen USA last week, and will be going in July to compete for the title of Miss Teen USA.

This was the Danville High School senior’s third-ever pageant, competing against 28 others to win the crown.

“I made a lot of good friends,” Prewitt said.

Madelynne Myers, winner of Miss Kentucky USA, will go on to compete at the Miss USA in June, before potentially going on to compete in the Miss Universe competition. The competition is now owned by IMG Models, which produces the Victoria Secret Fashion Show.

The teen division no longer does a swimsuit competition, instead bringing in activewear, which counts for one-third of the overall score. The other portions include interview and evening gown, each worth one-third.

This past weekend, for her first duty as Miss Kentucky Teen USA, Prewitt headed to Austin, Texas for Operation That’s My Dress, hosted by the USO, to benefit daughters of active service men and women.

“We are devoted to serve these girls of active military parents,” Prewitt said on Thursday, looking forward to the event, which specifically benefitted about 600 girls at Fort Hood and Camp Mabry.

The pageant winners modeled dresses for the girls, helping them choose their prom dresses, all donated by Sherrie Hill. The recipients also get jewelry, have a chance to get their hair done and more.

There will be others at bases around the country as the year progresses, she said.

It was the opportunities that pageants offer which prompted Prewitt to start again.

“I liked how (Miss Kentucky USA) wasn’t staged. It’s based on who you are as a person,” she said. “There are tons of open doors after you win, and lots of opportunities that can come your way.”

Some schools offer scholarships to winners of the Miss Kentucky Teen USA pageant. Prewitt, who plans to attend the University of Kentucky, said that school is not one that offers the scholarship. She plans to pursue a career in either sports broadcasting or entertainment broadcasting.

But Prewitt isn’t waiting around until she gets older to start on those plans. Last spring, during her junior year of high school, she interned with Jennifer Palumbo at WKYT. And for the past two years, she’s been working alongside Larry Vaught on his weekly radio show, Cat Calls, hosted on Thursdays at Mallards during football season.

Initially, Prewitt planned to attend the University of Florida. It had been her “dream school” and her plan was to cheer there, something she’s been doing most of her life.

“I went to a camp last summer there, at the Institute of Journalism and Communications. I ended up not liking UF as much as I thought I would,” she said.

That led her to alter her plans, and she stepped back from cheering to focus on her internships.

Prewitt said her love of sports comes from her family, parents DeMarco and Jamie Prewitt and brother Jacob.

“Dad’s a coach and a referee, my little brother’s a great athlete, my mom was also a cheerleader her whole life, so I’ve just grown up around loving sports,” she said. “I still love the atmosphere.”

While on a recent visit to the University of Kentucky with her family, Prewitt ran into some of the players, much to the amazement of her little brother.

“I saw Bam (Edrice Adebayo) and De’Aaron (Fox) and they came up and were like ‘Olivia!’ and hugged me,” she said.

It left her brother in shock.

“I didn’t even think to introduce them. He was so mad at me. But he thinks it’s cool,” she said, laughing.

“I got to interview Coach Cal and the whole team. That was awesome,” Prewitt said.

“When I first started, it was a little intimidating. I was a little shy,” she said. “Once I started getting the hang of it and getting to know the media crews, it became a lot more comfortable.”

She also worked at Coach Calipari’s Fantasy Camp and host a press conference with Seth Greenberg.

Working for Fox Sports, ESPN, the SEC Network — these are all dream jobs for the teen as working for E News would be, she said. Admittedly, the world of sports broadcasting is a primarily male-dominated field, but it doesn’t worry Prewitt.

“I think the industry is growing for women,” she said, citing examples such as Olivia Harlan and Laura Rutledge, both former pageant winners themselves, as well as Kaylee Hartung. “It’s becoming more competitive for women to get in there.”

Harlan actually holds the Miss Kansas Teen USA 2012 title, similar to Prewitt’s Miss Kentucky Teen USA title, and is someone Prewitt said she would love to meet, someone she looks to as a role model.

“(Harlan) is doing everything that I want to do,” Prewitt said.

Surprisingly, she said, her work in media so far helped her as she competed in the Miss Kentucky Teen USA® pageant.

“I thought I was going to be nervous as I answered my on stage questions, but I wasn’t,” Prewitt said. “I had no nerves. I just kind of went with it.”

Prewitt said she was thankful for the support of her family, including her grandparents, Ruth Ryan and Jerry and Vicki Gooch.

Besides her on-air jobs, Prewitt has also spent time working on-air in a different way — for the past two and half years she’s worked at Party on Air on Whirlaway Drive. She’s also worked in the children’s ministry at Southland Christian Church in Danville for five years and been part of the church’s youth group.

Through Southland, Prewitt has had the opportunity to serve as mentor to “Alyssa,” a student a Jennie Rogers, for the past two years.

Prewitt also leads Fellowship of Christian Athletes at the high school on Fridays, is the vice president of the student body, is a peer tutor in the special education classes, has been a member of the National Honor Society, a Youth Salute Scholar and on the homecoming court.

In her spare time, Prewitt has her own YouTube channel, and runs a blog at sundressesandsidelines.blogspot.com.

It’s a whirlwind of activity, but she manages to stay grounded.

“I’m just really blessed and fortunate to have this opportunity,” Prewitt said. “I’m thankful God opened this door for me and that my parents have bent over backwards to make sure that everything is possible for me.”

“Even though I have this title, it doesn’t define me. This is only temporary.”

For more information about the organization, visit www.misskentuckyusa.com.