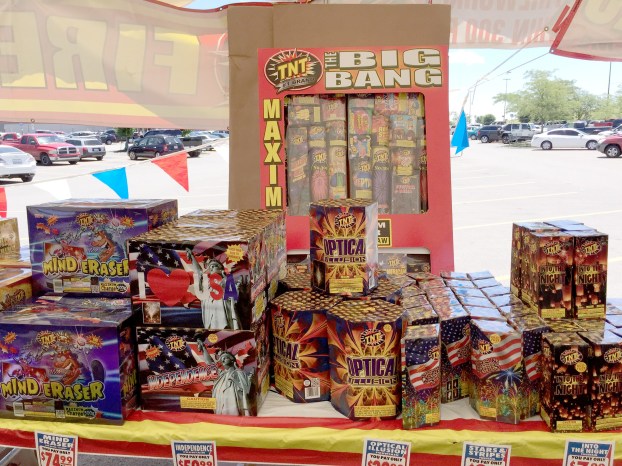 Photo by Casey Craiger
Fireworks sit on display at TNT Fireworks tent, located in the Walmart parking lot in Danville.

If you’re planning to celebrate Independence Day with fireworks, Danville Fire Marshal Doug Simpson says you should be smart about it.

“I would say for everyone to use good judgment, common sense, and be careful,” he said.

Simpson said in addition to following the rules about when fireworks can be set off, it’s important to buy high-quality fireworks and “never double up to make a larger explosion.”

Lighting more fireworks at one time than the label on a package indicates can result in injury to the person setting off the fireworks — and potentially viewers of the show.

Sparklers can also be dangerous. Most sparklers burn at 2,000 degrees Fahrenheit. Sparklers, alongside other presumed safe fireworks such as bottle rockets and firecrackers, have resulted in kids under four becoming the most injured age group during July 4 celebrations, according to Vanderbilt Children’s Hospital.

To avoid injuries to kids, Simpson said sparklers should be properly disposed of by placing them in a bucket of water.

“The material they are composed of is essentially a small welding rod,” he said.

Laws in Danville require that fireworks sold are legal to use.

“All fireworks sold in Danville are legal and in compliance of city rules,” Simpson said. “For consumers, state fire ordinances require sales to take place certain distances away from structures. We prefer for businesses in Danville who are interested in selling to go to our website at dhbc.ky.gov.”

Coach Robert Reed, owner of TNT Fireworks, in the Danville Walmart parking lot, is using his platform in the fireworks business to promote safe use of the products.

“I sell Class C fireworks because Nicholasville does not sell them,” Reed said. “I sell mortars and multi-aerials. … This is for my nonprofit central Kentucky football team, The Nicholasville Bears, and a portion of all sales go to the team.”

There are several helpful tips Reed provides to consumers.

“Some good precautions to take would be lighting a good distance away from trees. I recommend using large parking lots with permission of owners,” he said. “Dedicate one adult to light the fireworks. Certainly do not let a child light fireworks. And keep water close at hand. A fire extinguisher is the safest tool and works best for putting out fireworks.”

Reed said his business provides all customers with wooden rods to transfer a flame from a lighter to firework from a safe distance, as well as instructions and safety tips for a successful firework show.

“Right now we prefer everyone to attend the public display on July 4 at Millennium Park” Simpson said.

“Kentucky Kingdom and Kings Island do extravagant shows if you want to travel,” Reed said.

Danville City Commission did not finalize a pair of planned tax increases as was possible Monday night. Instead, they voted... read more