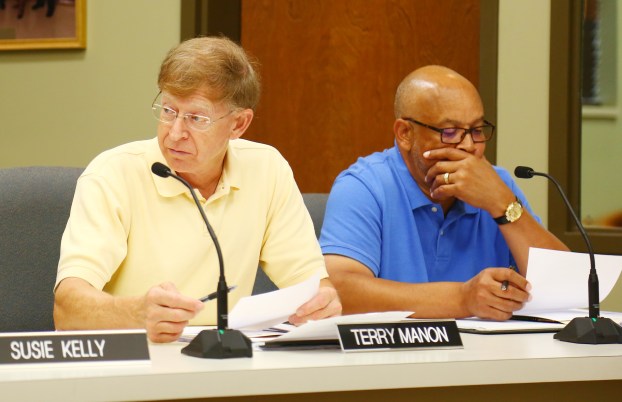 After pushes from Danville and Boyle County, P&Z to open on Fridays beginning in October

The Danville-Boyle County Planning and Zoning Office will open on Fridays starting in October, according to the P&Z annual budget passed Wednesday.

That change could satisfy demands from Danville and Boyle County elected officials that the P&Z office end its curtailed, four-day work week that has been in place since just after the Great Recession.

The P&Z Commission accepted its budget committee’s recommendation that it increase the salary of incoming director Steve Hunter when the new, expanded hours go into effect.

P&Z Commissioner Terry Manon, who serves on the budget committee, said it also considered the costs of adding Hunter and one additional staff member on Fridays; and of adding the full staff on Fridays.

Hunter will begin working four days a week when he takes over from retiring Director Paula Bary Aug. 1, and then add Fridays to his schedule after Oct. 1.

Bary told the commission the standard full work week throughout Danville City Hall is 37.5 hours, or seven and a half hours per day. Currently, P&Z staff work eight hours a day, four days a week.

Manon said the change won’t take effect until October because “prior to that, Steven Hunter has other commitments.”

Manon said Hunter is “comfortable” with the plan.

“It will give him a chance to get in and get settled, and see what the workload is really like, see what the budget and the actual numbers are turning out to be,” Manon said. “And if he thinks we should be doing something other than that, he can bring that to us when he’s in the driver’s seat.”

“If the new director sees the need to add staff on that Friday, we as a commission can certainly approve that,” P&Z Chair Jerry Leber said.

P&Z has been criticized publicly by city and county officials — including Danville Mayor Mike Perros, Danville City Commissioner Denise Terry and Boyle County Magistrate Jack Hendricks — for only being open four days a week. Those same officials have suggested a director position should be required to work five days a week or a full 40 hours without any additional pay.

At Wednesday’s P&Z meeting, Commissioner Vince DiMartino asked about the change in Hunter’s salary that accompanies the addition of Fridays. 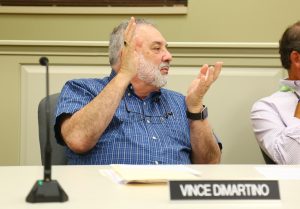 P&Z Commissioner Vince DiMartino asks about how much the new P&Z director will be paid when he starts working on Fridays in October.

Bary said the agreement with Hunter is to pay him $26 per hour; the increased pay amounts to the additional five and a half hours he would be working per week on Fridays at the $26 rate.

Initially, officials believed it would cost in the vicinity of $25,000 annually to fully staff the P&Z office five days a week. Danville City Commission allocated $12,500 in its budget — on the condition that Boyle County Fiscal Court do the same — in order to provide that funding. But the fiscal court did not increase its funding for P&Z; in fact, the court nearly voted to reduce its funding by $5,000.

The P&Z budget passed Wednesday expects the same levels of funding from both entities it got last year — $75,000 from Danville and $65,000 from Boyle County.

The increase to Hunter’s salary for working Fridays would be $7,436 annually, but since the Fridays don’t start until October, the actual cost this fiscal year should be a little less than $5,600.

Manon said P&Z expects to finish the fiscal year in June 2018 with around $57,000 in the bank, which is just shy of the 25-percent reserve that Danville and Boyle County recommend the agency maintain.

Jerry Mathes, the man accused of assaulting a customer at his former body shop on Roy Arnold Drive, failed to... read more