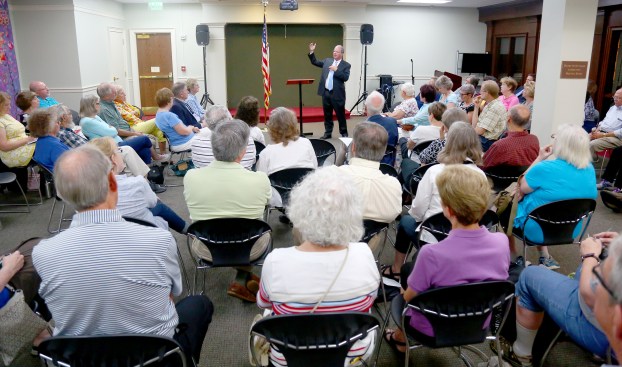 Members of Congress around the country have come home in recent months to loud, angry meetings with their constituents, especially on the issue of health care reform. Danville did things a little differently on Friday. 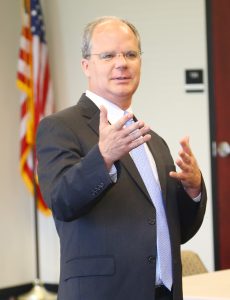 Guthrie speaks during an “office hours” event at InterCounty Energy on Hustonville Road.

U.S. Rep. Brett Guthrie (R-Bowling Green) visited Boyle County for a pair of meetings with constituents, spending more than three hours speaking with members of the public. There were plenty of dissenting opinions and people who voiced displeasure with Guthrie or the current Republican agenda in Washington, D.C. — but there were zero shouting matches or disruptions.

“I think people here are genuinely interested in letting our views be known and having conversations,” said Jane Brantley, who helped organize the first of Guthrie’s two meetings — a private sit-down with members of local groups that fall well outside the conservative Republican’s base: Kentuckians for the Commonwealth, the Democratic Women’s Network, the ACLU, the Boyle County Democratic Women’s Club, Citizens Concerned for Human Relations and the Boyle County Democratic Executive Committee.

“A lot of the people in this room are very active politically and make a lot of phone calls, go to marches, go to protests,” Brantley said as the community room at the Boyle County Public Library was clearing after the 90-minute town-hall style event. “But we want to express our views coherently and intelligently — and shouting matches don’t achieve those goals, in my opinion.”

The groups intended to address four main topics with Guthrie: health care reform; Russian interference with the 2016 U.S. election; climate change; and proposed tax cuts that would disproportionately benefit wealthy people. They spent more than 40 minutes on health care and didn’t make it to the tax cuts topic.

Attendees told Guthrie they believe the Republican health care reform proposal cuts benefits to those in need — poor, children, the elderly — in order to give tax cuts to the wealthiest Americans.

“We are cutting Medicaid in order to give taxes to the highest paid people in the United States. I find this morally repugnant. I think this is a deeply troubling piece of this bill,” Rick Axtell said of the health care reform bill passed by the U.S. House of Representatives and voted for by Guthrie.

Guthrie pushed back on many allegations about the House bill, particularly the estimation by the Congressional Budget Office that it would result in 23 million fewer people having health insurance.

“I do think they’ll be accommodated,” Guthrie said. “I want people to be covered.”

Guthrie said the House bill has been criticized by people further to the right than he is for being “Obamacare light,” because it maintains a safety net aimed at keeping vulnerable people insured. 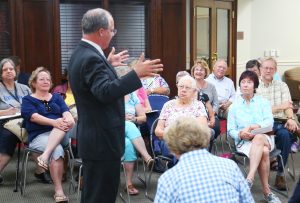 Guthrie speaks to attendees at the library.

On the topic of Russia, Guthrie differed from positions taken by President Donald Trump and other Republicans on whether Russia was meddling in the 2016 election.

“I’m convinced that Russia did the emails from the (Democratic National Committee),” he said. “There’s not a doubt in my mind.”

Guthrie said Russian President Vladimir Putin is “the number one enemy of our country right now.”

“Oh, I say it loudly. Every speech I give I talk about NATO,” said Guthrie, who serves on the NATO (North Atlantic Treaty Organization) Parliamentary Assembly.

On climate change, Guthrie told those gathered he has doubts about what the “real science” says versus what the recent Paris Agreement calls for. And he alleged the Paris Agreement would have required the U.S. to raise natural gas prices, while exempting major polluters China and India from taking action to reverse climate change.

The Paris Agreement is a global agreement between nearly every country on the planet to work toward reducing greenhouse gas emissions and avoiding irreversible global warming. It is a voluntary, non-binding agreement, under which each country sets its own goals for reducing emissions. This year, Trump decided to remove the U.S. from the agreement, claiming it would harm the country.

“I’m not a full denier that we don’t have to do things to our environment,” Guthrie said. “I’m not in favor of getting rid of the EPA.”

Guthrie said after the private meeting that people all around his Second Congressional District have been respectful during his visits.

“There’s stuff that I’ve heard today that I need to go back and digest and say, ‘OK, I’m not always right,’” Guthrie said. “Are there things that we can implement that will make the system better? That will help with people? That’s our number-one goal.”

Guthrie said the main point he hopes he gets across is on health care.

“Our goal isn’t to undo a legacy item for President Obama,” he said. “Our goal is to fix the health care system so it works for everyday, hard-working taxpayers.”

While 46 people attended the 90-minute morning meeting at the library, attendance at Guthrie’s “office hours” event, held from 11 a.m. to 12:30 p.m. at InterCounty Energy, topped out at around 70. Again, attendees and Guthrie agreed or disagreed on issues without anyone talking over anyone else.

Conversation at the second meeting was more wide-ranging, with several members of the public expressing concerns about the current situation with North Korea. 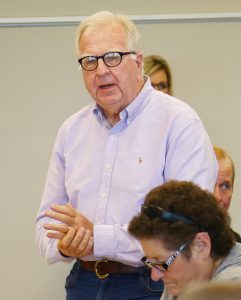 North Korea has been ramping up missile tests and is now believed to be capable of launching a missile that could reach Alaska. Whether it could attach a warhead to such a missile is another question.

“The elephant in the room is North Korea,” Boyle County Magistrate John Caywood said. “… What are you hearing?”

Guthrie said he believes a diplomatic solution — convincing China to pressure North Korea into better behavior — is the best option. But “you can’t take force off the table,” he said.

Guthrie restated many of his positions on health care and Russian interference, and addressed a complaint from Lori Hartmann, who said attacks on the media from President Trump are harmful to the U.S. and Republicans should be defending the media.

Guthrie said if Trump asked Congress to actually take action to prevent the media from speaking, that would be “censorship” and he would oppose it. As for Trump’s habit of using Twitter to attack those he disagrees with: “That’s not my style,” Guthrie said. “I’m not a big tweeter.”

Guthrie said he prefers to digest news over a longer period of time and see what develops before reacting. He added he believes Trump has legitimate complaints about some media coverage that has seemed to be intentionally telling a certain narrative — specifically the Trump-Russia narrative that Trump allegedly colluded with Russia during the election or is otherwise beholden to the country.

“There are a lot of these stories that just aren’t really true,” Guthrie said. “… I’ve had people ask me, ‘which news should I watch?’ And I haven’t recommended any of them.”

“It’s great to refute a story if they’re inaccurate, but to paint the broad brush …” Hartmann said.

“Well, his style is different than mine would be,” Guthrie said. “We need to have the ‘Fourth Estate,’ as they call it.”

Next week, about 350 campers and teen and adult leaders from Boyle, Lincoln and Powell counties will converge on the... read more