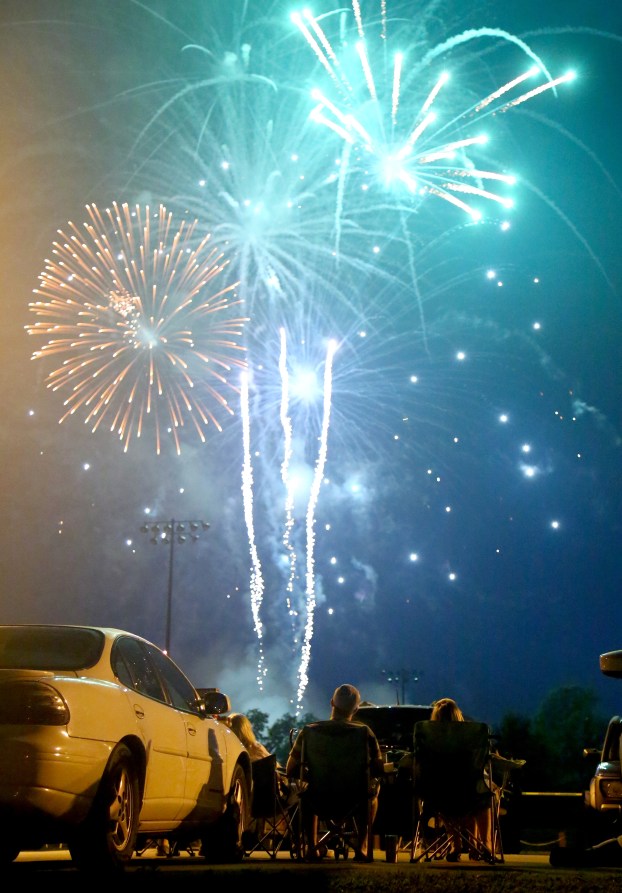 Ben Kleppinger People watch a fireworks display at Millennium Park July 4. The display was paid for by the City of Danville and the Boyle County Fiscal Court.

The new fireworks ordinance for the city of Danville seems to have made an impact in its first Fourth of July holiday week, said Danville Police Chief Tony Gray.

“I think it went better. For the most part, more people were more aware of their neighbors,” Gray said on Tuesday. “We had calls, don’t get me wrong. We couldn’t get to them all. But we didn’t have the calls and the numbers we had in the past.”

He said he doesn’t have an accurate number on the calls, because there are so many and some are repeated calls to the same area. A lot of times, Gray said, “people call and say, ‘There are fireworks going off,’ and hang up.”

Despite that, he does believe the city’s new ordinance, passed last October, made an impact.

He said the holiday falling during the week probably impacted the celebrations last week, but typically, people celebrate the weekend before and after. Both weekends fell outside the ordinance’s approved dates of July 3, 4 and 5.

“I think those things played into it — there seem to be more celebrations when it does fall on a weekend,” Gray said. “However, most people quit at 11 p.m.”

That’s not to say there weren’t issues, he said. Some residents complained because of debris falling on their houses and cars, and on July 4, there were other more pressing calls that forced the department to not pursue the complaints as much.

“We had a couple of hot calls that night — it was a busy night and that’s not counting the fireworks,” Gray said, referring to a burglary call, which pulled two units away from the regular five on duty at night.

“With a few of those calls that take two or three units, you don’t always have time to chase the fireworks,” he said.

Officers are offered the chance for overtime those nights but since it’s a holiday, most choose not to take that option. Next year, they’ll have to look at the best ways to man those nights and keep up with the numbers of calls, Gray said.

Overall, he reiterated, the calls reporting fireworks were lower than normal.

Danville City Commission passed an ordinance restricting when fireworks could be set off inside city limits last year, after police were flooded with complaints surrounding the July 4 holiday.

Grants to fund construction of new T-hangar at Boyle airport

Two grants totaling more than $750,000 from the Federal Aviation Administration and the Kentucky Transportation Cabinet, Department of Aviation, will... read more