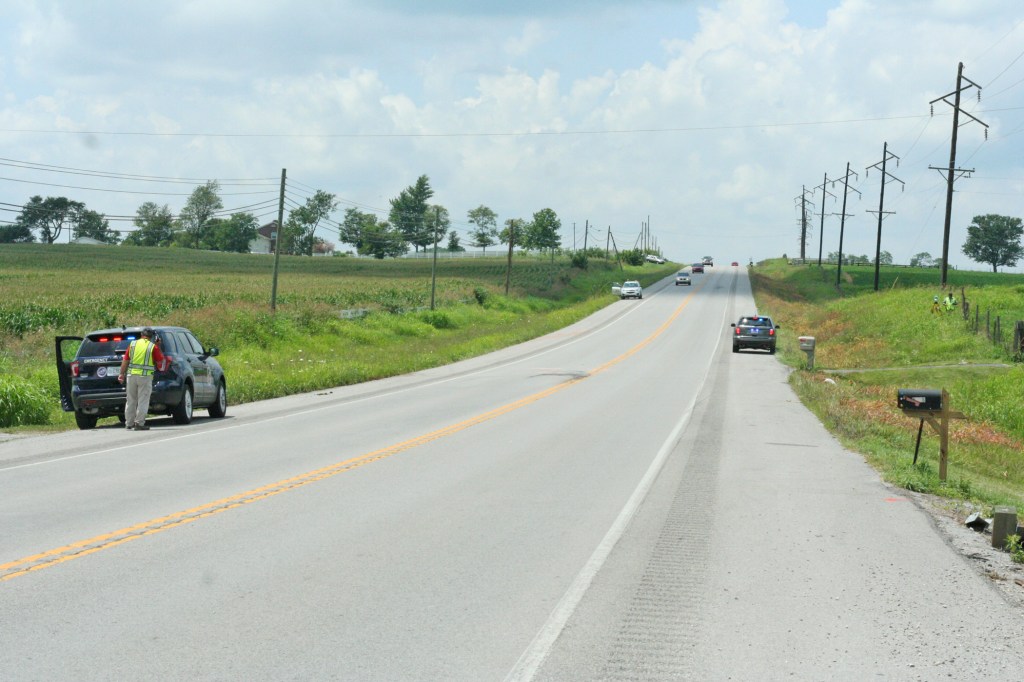 Kendra Peek/kendra.peek@amnews.com The location of a fatal crash on July 6, on Perryville Road near Salt River Road.

The Boyle County Sheriff’s Department is continuing to investigate a July 6, two-vehicle crash along Perryville Road, which left one dead and one hospitalized.

The wreck occurred west of the intersection with Salt River Road, and closed the road for a few hours. Betty “Sue” Gayle Wethington, 53 of Parksville was killed, and AJ Laughlin, 36, of Harrodsburg was injured.

Weather has been identified as a potential cause; heavy rains caused pooling water on the road, and could have caused someone to hydroplane, said Boyle County Deputy Kyle Lyons, lead investigator, following the crash. Speed may also have been a factor.

“Usually you can kind of tell what happened. Most of our fatals are single-vehicle … We got on scene and, initially, we had no idea what happened, based on the severity of the vehicles and the way they were facing,” Lyons said.

There were no direct witnesses to the events leading up to the crash, and Laughlin was unable to answer police questions following the wreck. 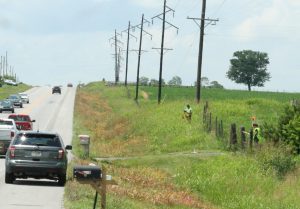 Kendra Peek/kendra.peek@amnews.com
Detectives Kevin Peel and Lisa Graff with the Danville Police Department on Wednesday on the scene of the July 6 fatal crash on Perryville Road. Peel said they use tools similar to surveyors to measure the distances, but they have special software that helps law enforcement officers determine what happened.

Detective Kevin Peel with the Danville Police Department, who is  trained in accident reconstruction, spent Wednesday afternoon at the scene trying to determine what happened. Peel said it will take a few weeks to complete the reconstruction.

“Hopefully, we’ll be able to get something off of the program that Detective Peel was using,” Lyons said.

Besides Peel and Detective Lisa Graff with the Danville Police Department, Boyle County Sheriff’s Deputies were on scene, as well as engineers with the Kentucky Transportation Cabinet and Boyle County Emergency Management Director Mike Wilder.

The road was closed periodically during the process, Wilder said.

The Kentucky State Police accident reconstruction was requested immediately following the wreck, but did not come; Lyons said the wreck did not meet their criteria. They did send a black box analyzer, which gave some information about the vehicles in the moments leading up to the crash.

Lyons said it appears Laughlin’s truck, a 2015 Dodge Ram 1500, may have spun prior to impact — it was going 30 miles an hour at the moment of impact according to blackbox data in the police report obtained from the Boyle County Sheriff’s Office. Lyons said the vehicle was sideways when the trucks collided.

Laughlin was ejected from the rear of his truck. He was listed in fair condition at the University of Kentucky Chandler Medical Center Wednesday.

Following the crash, Lyons told media he believed that Laughlin’s vehicle may have dropped off the side of the road prior to the crash, which may also have had an impact on the collision.

Lyons said he doesn’t believe any charges will be filed in the case. No drugs or alcohol are believed to have been involved in the crash.

The family of Laughlin has enlisted the help of a private reconstructionist to conduct their own investigation into the crash.