The Boyle County Sheriff’s Office is seeking information on Austin McClure, 22, of Stanford, who led law enforcement on a high-speed chase into Lincoln County before fleeing on foot early Wednesday morning. 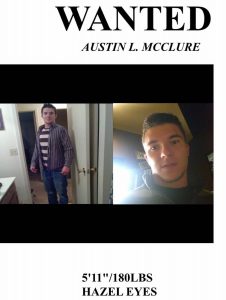 A wanted flier created by the Boyle County Sheriff’s Department seeking information regarding Austin McClure of Stanford, who led a deputy on a high speed chase into Lincoln County, before he crashed his car near a creek and fled on foot.

“I saw a Crown Vic pull out onto (U.S.) 127. It went into the emergency lane, did a half-donut like it was going to turn back to Walmart, then took off toward Junction,” McCoy said on Thursday.

McCoy said the car didn’t have a license plate.

“My initial thought was, it was a stolen car or they had just committed a theft at Walmart,” he said.

McClure drove in the northbound lane more than once, McCoy said. As they neared the intersection of U.S. 127 and Ky. 78, he slowed down.

“He slowed down to about 45 and put his flashers on. I thought he was going to stop. Then he turned them off and took off down 78.”

McCoy had been in contact with the Danville 911 Dispatch Center, who had made contact with Bluegrass 911 Dispatch, sending Lincoln County deputies to the area. Kentucky State Police troopers responded as well. A spike strip was placed on Ky. 78, near its intersection with Ky. 198.

McCoy said three of the four tires connected with the strips; the vehicle continued about 200-300 feet before crashing into a fence and landing in a creek.

McCoy described the area where the vehicle wrecked as “swampy.”

“There were weeds over my head; the water was up to my knees,” he said.

There were passengers in the car with the driver who said they were held during the pursuit against their will.

The passengers identified McClure as the driver and said they believed McClure wrecked the car in the creek intentionally, to give himself a chance to escape.

“By the time we recovered them, there was no way for us to know which way he went,” McCoy said.

McCoy said the passengers claim McClure ran because he didn’t have insurance or registration on the car. The car belongs to McClure, McCoy said.

McClure had not been captured Thursday evening. He is facing charges of fleeing and evading police, wanton endangerment and unlawful imprisonment. He is not believed to have a prior criminal record, McCoy said.

“He had some minor traffic violations,” he said.

It is believed that McClure remains in the Stanford area. Anyone with information regarding his whereabouts is encouraged to contact the Boyle County Sheriff’s Office at (859) 238-1123 or local law enforcement.