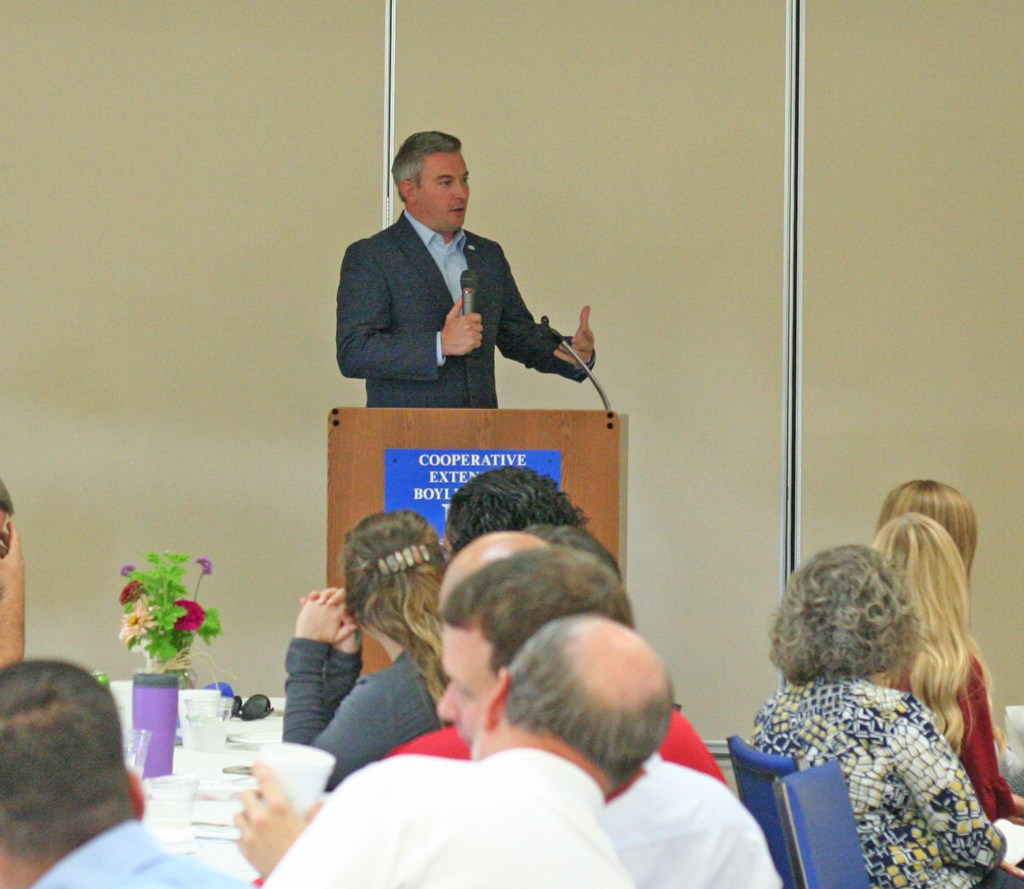 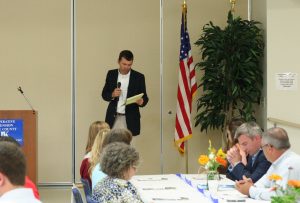 There are 620 farms in Boyle County totaling 101,549 acres, according to data shared by Brad Godbey, president of Boyle County Farm Bureau, during the annual Farm to City Breakfast Tuesday morning at the Boyle County Cooperative Extension Office.

“Boyle County, unlike a lot of other counties, is unique (because) livestock generates more sales than crops. Most other counties, especially in the last several years, you see the crop sales catching up,” Godbey said.

Godbey introduced Ryan Quarles, Kentucky Commissioner of Agriculture, to the group of about 100 people gathered to join in the meal and hear more about the future of agriculture in the commonwealth.

The state, he said, has a rich agricultural tradition since the days of pioneers.

“In Kentucky, we take pride in agriculture. After traveling the state in 2016 with Auditor Mike Harmon — I drove 65,000 miles around the state and picked up a few pounds in my Kentucky Proud belly — one thing I learned is that agriculture exists in every single county, in every single nook and cranny in our state. That’s something we should be proud of,” Quarles said.

However, he said, agriculture has changed in the last 15 years and continues to do so. He asked those present how many worked in tobacco at some point in their lives and many hands raised; when asked how many still do, only two hands remained up, one of which was Quarles’.

“We had no choice but to diversify,” he said.

Kentucky has “a lot to be proud of,” Quarles said.

“We have a lot of diversity and a lot of variety. I like to tell people we grow apples, zucchini and everything in between,” he said.

About $6 billion in agriculture revenue is brought in each year in the state, Quarles said. And the number jumps to about $45 billion in economic impact, when you consider all the jobs related to food and fiber production, he said.

• the biscuits at all McDonald’s in the eastern United States come from Kentucky;

• the sausage from Cracker Barrel across the nation comes from Kentucky; and

• the world’s largest peanut factory is located in Lexington, despite there being no peanut farmers in the state.

“Those are just the examples that we know of, where we’re taking a product, whether it’s livestock or crop, adding value to it, creating jobs, making sure that agriculture plays a dominant role in how we develop our state,” Quarles said.

Future agriculture investments include potentially growing the kenaf plant, to aid automobile manufacturers; and growing industrial hemp on over 12,000 acres around the state.

“We need your help,” Quarles said to the students with the Boyle County FFA who were in attendance. “The average age of a farmer in Kentucky is 62 years old. Name another occupation where the average age is retirement age besides the U.S. Senate.

“We have got to get more people involved — there are a lot of jobs … I know we can rise to the challenge.”

He said there is a need to fight the misconceptions around agriculture. People need to know where their food comes from and how it gets from the farm to the plate, he said. 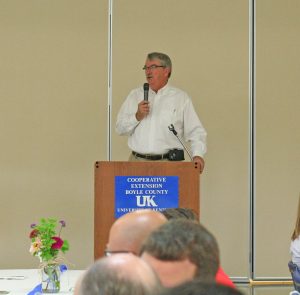 “They don’t have access or don’t know where their next meal is coming from,” he said. “… I find it appalling that so many — the less fortunate among us — go hungry.”

Quarles said he is working with retail locations and restaurants to ensure that leftover food can be given to those in need.

“This year, we expect grocery stores to donate more food than ever without fear of lawsuits. I know we’re going to move the needle of hunger in Kentucky,” he said.

Quarles, 33, is currently the youngest statewide elected official in the United States. A native of Scott County, Quarles lives there with his family, operating their family farm.