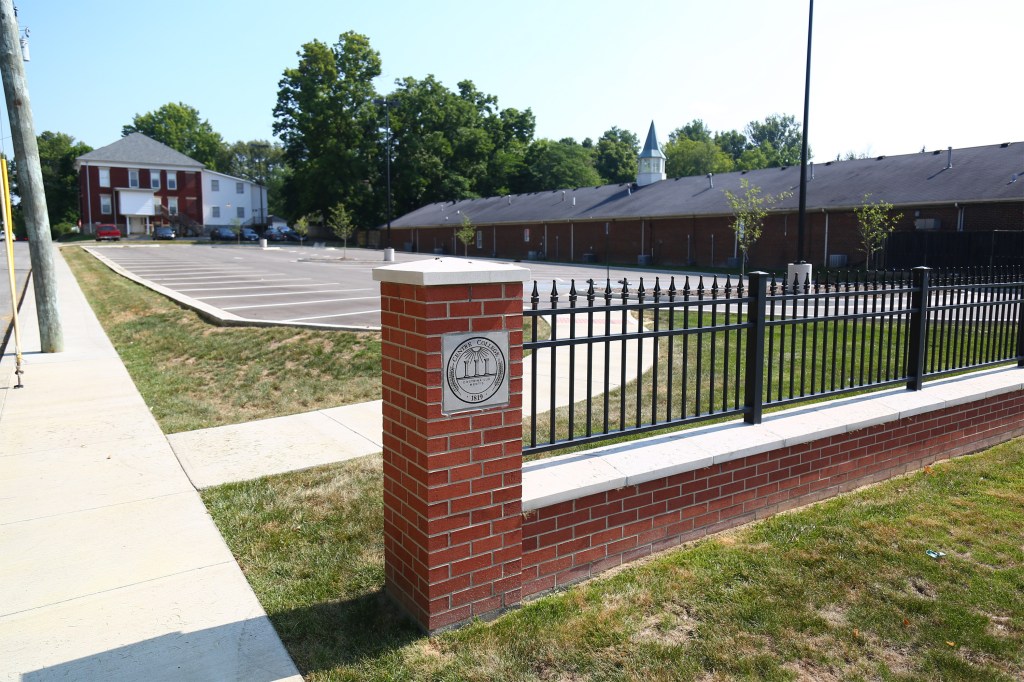 Ben Kleppinger/ben.kleppinger@amnews.com
Downtown Danville design guidelines require parking lots to be screened from roadways, but a parking lot completed last year by Centre College does not follow that rule on its Fifth Street side. The Main Street side is screened by a brick-and-iron-fence border.

The Danville Architectural Heritage Board did not hedge this week when it came to requiring a hedge along the side of a Fifth Street parking lot.

The board declined to give Centre College a reprieve from the requirement to screen the parking lot at the corner of Fifth and Main streets along its Fifth Street edge — a requirement Centre agreed to when the college first proposed building the lot in 2014.

James Leahey, vice president for legal affairs and gift planning at Centre, asked AHB members Wednesday for an exception to their guidelines, in part because of “safety concerns.”

“We did have plans in the original plan to put a hedge along Fifth Street, as directed by this board,” Leahey said. “Since that time, we have become more concerned about what that would do, particularly with safety concerns. … It’s going to allow people to hide behind the bushes if they wish to do that.”

Leahey said the parking lot is also frequently used for vehicles that remain parked for multiple days in a row, which adds to worries that a screen would reduce visibility and make it easier for criminal acts to take place.

“Even a two-foot hedge still gives somebody the opportunity to hide behind it,” he said.

Leahy detailed the reasons Centre wanted permission not to screen the parking lot on Fifth Street in a memo provided to the AHB, noting that “for these reasons, Chief of Police Tony Gray has advised against any further screening of the lot.”

Leahey’s memo notes Centre did screen the parking lot from Main Street, and argues the AHB has the authority to grant an exception to its guideline, which states, “If parking abuts a street, it should be screened from view by landscaping and/or a low brick wall.”

AHB members raised multiple objections to giving Centre a pass on the hedge.

AHB member Julie Wagner said the purpose of the guideline is to screen off parking lots and make things more attractive, but also, in the case of brick-wall screens, “to leave a little bit of a memory of what used to be there.”

“So along that grassy strip there, the purpose was a) to screen the parking lot, and second is to sort of memorialize what used to be there,” Wagner said. “I know that sounds kind of corny, but that is the purpose of these brick walls … would you be interested in putting a brick wall along there?”

“No, we wouldn’t,” Leahey said, adding that a wall or anything in the narrow grass strip to screen the parking lot would  create a “very narrow chute” for pedestrians walking along Fifth Street when cars are parked on the street.

An iron fence would be very expensive, Leahey said.

AHB Chairman Tom Tye noted Centre agreed to put in a hedge in the original certificate of appropriateness that the AHB approved in 2014. Centre never came back to ask the AHB about changing the plan.

“It’s kind of like you’re asking for forgiveness and not permission,” Tye said.

Tye eventually asked for a motion on Centre’s request but none came.

“For lack of a motion, the requirement still stands,” he said.

AHB member Dana Dixon said the board is open to a modified proposal from Centre that would meet the guideline requirements.

“I think a strip of grass and a lot of blacktop doesn’t meet that requirement,” she said.

The lot was constructed on top of multiple properties acquired by Centre, where Bob’s Quickstop gas station and several houses used to stand, according to news archives.

The land has environmental problems due to leaks from underground gas tanks, according to archives, but is still zoned commercial and Centre anticipates it could some day be developed again.

In 2014, Leahey was quoted in The Advocate-Messenger that the parking lot allows for remediation of the environmental issues with the land over time.

“In time, the contaminants will break down and dissipate from the soil, and the property will be available for development, either or both by Centre or another person,” Leahey said at the time. “In the meantime, and until someone comes forward with an attractive building idea, this parking lot will render the property more attractive for the surrounding neighborhood and useful for Centre and the community.”

Photos: Jig dancing at Eat, Drink and Be Irish