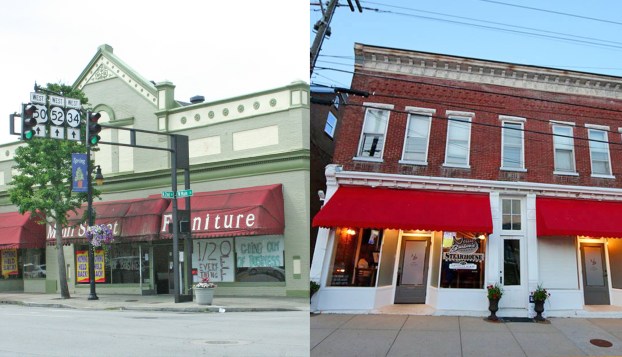 File photos Main Street Furniture and Nellie Burton's Steakhouse and Sports Bar have both closed for business in downtown Danville this month.

Danville has lost two businesses in the downtown district within the last few weeks, with the final closing of the Main Street Furniture Market and Nellie Burton’s Steakhouse and Sports Bar.

A weekly newsletter from the Heart of Danville Main Street Program formally announced the closures of the two “beloved” businesses in Danville.

“One of the joys of working at a Main Street program is seeing new businesses move in and watching people fall in love with unique (and local) products and services they offer. It’s one of the reasons we work day-in and day-out at the Heart of Danville to keep main street a desirable place for businesses and their customers. Unfortunately, that also means we have to say goodbye to businesses occasionally,” the newsletter begins, before closing the first paragraph with, “Both Main Street Furniture and Nellie Burton’s have closed their doors to customers.”

The Main Street Furniture Market, which opened in 2012, announced a closing sale earlier in the year. Owner Jennifer Osborne said in a June 20 article in The Advocate-Messenger that illness in the family, which kept pulling her away from the business, prompted the closure. The store’s last day was Sunday.

A furniture store has stood in that place since 1974, when Pat Kincaid opened Kincaid Furniture, according to archives of The Advocate-Messenger.

Nellie Burton’s Steakhouse and Sports Bar, which opened in 2015, was formerly La Taqueria Los Amigos, a Mexican restaurant; and Pescara, a Mediterranean restaurant.

In a July 9 Facebook post, Jerry Houck, owner of Nellie Burton’s Steakhouse and Sports Bar and of Cue on Main, said the decision to close the business was in light of the difficulties of running two restaurants in the downtown district.

“It is a decision based on the hope that I can continue to sustain Cue, build the catering business, and finish some other projects. Yes, sometimes you have to take a step back and course correct. I truly believe that everything happens for a reason,” Houck wrote.

Cue on Main and Cue Catering are not to be affected by the closure, Houck said in the post. He could not be reached for comment.