Major EDP partners agree to even split on new board 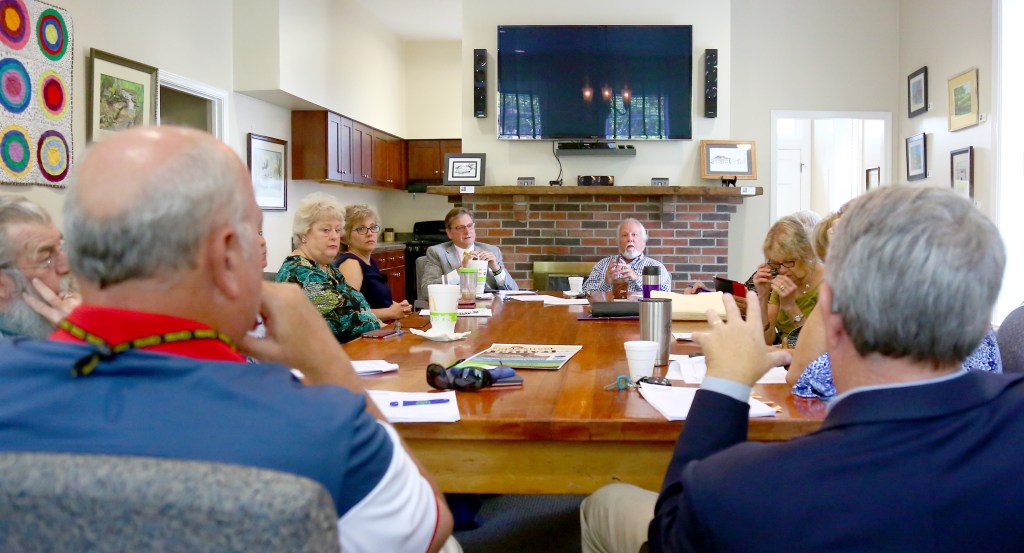 Ben Kleppinger/ben.kleppinger@amnews.com
The Danville-Boyle County Economic Development Partnership Board of Directors meets Wednesday, July 19. Proposed bylaw changes could alter the makeup of the board as soon as October.

The Boyle County Industrial Foundation, the Boyle County Fiscal Court and the City of Danville would all have equal influence on the local economic development board under an agreement reached by leaders with the three organizations Thursday.

“I think it marked a new spirit of cooperation and a new recognition that the exercise of economic development is much different and broader than the way we as a community have historically done it,” Perros said Friday.

Officials with the city, including Perros; the county, including Judge-Executive Harold McKinney; and the Industrial Foundation met to hash out the agreement and delve into the bylaws that could be used to effect the changes. EDP Chair Ben Nelson and economic development consultant Kyle Talente moderated and facilitated the discussion, Nelson said.

McKinney said in addition to reaching an agreement on the potential makeup of the board, those at the meeting also agreed to a high level of transparency for the new board.

“We will formally acknowledge in our bylaws that we will subject ourselves to the Open Meetings law and the Open Records law,” McKinney said.

Perros said he appreciates the Industrial Foundation’s “willingness to embrace a new direction.” Equally balanced seats among the three biggest members is important because the city and county provide such substantial funding for the EDP, he said.

“We need to have some way of giving (taxpayers) some background on what’s happening and what’s not happening and what come of our challenges are. We’ve not had that kind of access to information in the past. I fully expect going forward we will,” he said. “… If we’re going to write a check on behalf of the taxpayer, we want to be in a position to represent the taxpayer appropriately.”

Nelson and Perros confirmed the newly proposed board would maintain a “private majority,” meaning more voting members would be appointed or voted in from the private sector than there would be seats appointed by government agencies.

The new board makeup agreed to Thursday would be:

The cities of Junction City and Perryville could both get a voting seat on the board if they contribute to funding the EDP — a scenario previously described as “pay-to-play” by officials.

Perros said everyone at Thursday’s meeting was in “full agreement” that the private majority on the board should be maintained.

“Ben Nelson has been a champion here. This guy has herded cats and chicken and mice and has done a yeoman’s job of marshaling all this effort to a wonderfully successful conclusion,” he said.

Nelson said he has wanted from the beginning for any reorganization of the EDP board to lead to increased involvement from the public partners such as Danville and Boyle County.

“This board composition actually brings them to the table in a working kind of way,” he said.

Nelson laid out the tentative timeline for creating the changes agreed to on Thursday. Initially, he is polishing up the proposed bylaws that would remake the EDP board based on Thursday’s conversation. If the city, county and Industrial Foundation all agree on what he comes up with, then:

• On July 27, Nelson would send the proposed bylaws out to the current EDP board members for review and discussion.

• On Aug. 16, the bylaws would be discussed at the EDP’s monthly board meeting and the public members would take the bylaws back to their constituencies for input.

• On Sept. 20, if the public partners have given the OK and the board votes in favor, the bylaws could be adopted.

“The intention is kind of to deconstruct the old board and reconstruct the new board while the car is running around the track so we don’t lose any momentum,” he said.

Nelson said the plan right now would be for the three at-large seats to be vacant initially, until the new board chooses people to fill them.

“We think the new people should pick the three citizens-at-large, not the outgoing board people,” he said.

McKinney said changing the board makeup will hopefully be better for the local economy in the long run. “I think what we’re trying to do ultimately is get a more fluid approach to economic development, involve more people and bring all of our resources to bear.”