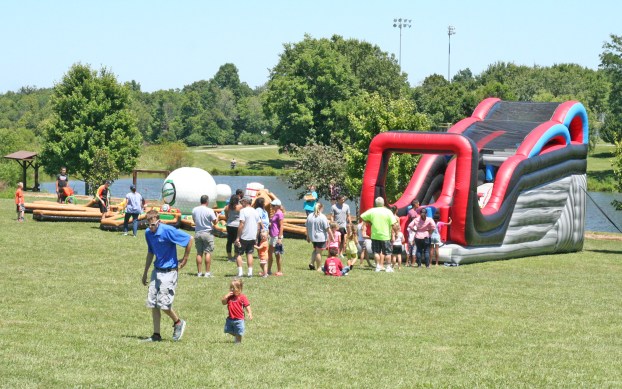 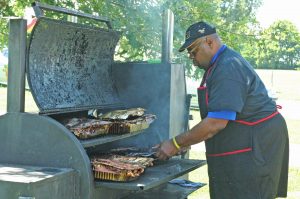 Kendra Peek/kendra.peek@amnews.com
Vaughn Little opens the foil on food he prepared for the 2017 Back to School Block Party.

More than 3,700 people attended the 2017 Back to School Block Party, held Sunday at Millennium Park.

“I feel like it went beyond amazing. The weather was beautiful as well,” said Rashea Ford, event organizer.

There were about 30 inflatables, free food, basketball, kickball tournaments, music, about 20 community vendors with activities and more. There were performances from Complex Step Team from Louisville; and hip hop dance numbers by Tye Wilhite and Jason Bell. Ford also performed a hip hop dance.

Elementary students in the Danville Schools were given tickets they can redeem at the schools for free backpacks and school supplies. Other free items were given away to attendees, such as books for kids from the Boyle County Public Library.

This was the fourth year for the Back to School Block Party, which initially started at Constitution Square Park with about 425 participants. 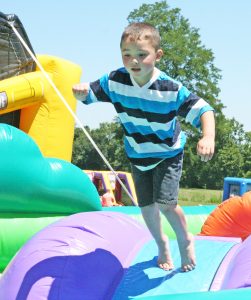 Kendra Peek/kendra.peek@amnews.com
Wyatt Klein, 4, jumps from the back of a “dragon” in an inflatable at the 2017 Back to School Block Party on Sunday.

The event took about 24 volunteers, along with thousands of dollars in community donations to pull off.

During the event, Ford recognized some of the specific individuals who had helped put the event together over the years: Ramone Mucker, Pastor James Hunn, Vaughn Little, Anna Houston and the Danville Fire and Police departments.

There will be a meeting in a few weeks to begin organizing next year’s event, which Ford hopes to make bigger. Anyone interested in volunteering, setting up, donating or otherwise being a part of making next year’s Block Party happen, email dontsleep2017@gmail.com.

The backpacks to be given away will be packed noon Friday at Jennie Rogers Elementary School, 410 E. Main St. Anyone who would like to help by donating their time is welcome.

A former Casey County teacher has been sentenced to five years in prison after pleading guilty to a federal charge... read more