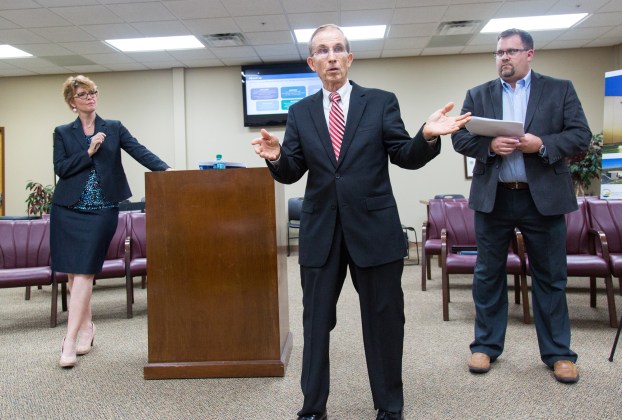 Ben Kleppinger/ben.kleppinger@amnews.com
From left, Monica Sumner, Allen Beck and Eric Chambers with Brandstetter Carroll present to the Boyle Mercer Joint Jail Committee in August 2017. Brandstetter Carroll was selected to conduct a comprehensive study of the Boyle County Detention Center in October 2017; the bulk of that study is expected to be released in draft form on Friday, Sept. 21, 2018.

HARRODSBURG — What does the future of incarceration look like in Boyle and Mercer counties? No one knows right now, but the counties took an early step toward finding out Friday, when the Joint Jail Committee, along with three Boyle County magistrates, sat down for a marathon three-and-a-half-hour meeting with the three companies who want to help find the answer.

Brandstetter Carroll; Carter Goble Lee Companies (CGL); and HDR Inc. all got 45 minutes to present their vision for how the counties can go about researching and developing a plan — whether it means building an entirely new jail, redesigning or expanding the current jail, or even, perhaps, changing policies and procedures to lower the current jail’s average daily inmate population. Joint Jail members followed up on the presentations with questions.

Up first, Brandstetter Carroll representatives touted their experience working on more than 10 jail and law enforcement facilities projects in Kentucky, including development and construction of the Kenton County and Campbell County jail facilities.

Lead presenter Monica Sumner said Brandstetter Carroll’s goal would be to provide the answers that Boyle and Mercer counties do not currently have.

“The whole community, these two counties, everyone involved in this jail — you are a canoe in the ocean, you are lost at sea,” Sumner said. “Everywhere you look, there’s a swell of water coming up. The faster you row, you still cannot see land … What we’re offering today is that we know how to get you to the beach — together.”

Brandstetter Carroll’s team features expert consultants Dr. Allen Beck and Dr. Kenneth Ray. Ray is a mental health and substance abuse expert, while Beck has a doctorate in criminal justice and has consulted on jail projects across the nation.

Brandstetter Carroll didn’t bring any architects or engineers with them, because the counties aren’t ready to look at construction yet — they must still figure out what the best solution is, the representatives said.

Eric Chambers with Brandstetter Carroll held up one detention facility project the company worked on in Okaloosa, Florida, as an example of what the company can do. That facility is rated to hold 594 inmates, but was peaking at close to 900, Chambers said. Brandstetter Carroll’s study resulted in operational changes but no new construction; it resulted in the population dropping to near the rated capacity shortly after the study was completed, and down to below 500 three years after that, he said.

Chambers said the solution for Boyle and Mercer counties should not be “just build a bigger jail.”

“Then we’ve addressed a need, but we haven’t addressed the problem,” he said.

If hired, Brandstetter Carroll would set up a “core group” of representatives from the agencies and organizations involved with and capable of helping with incarceration —  from district and circuit judges to local health departments, Beck said.

This group would participate in weekly calls during what could be a three- to four-month process “at least,” Beck said.

Brandstetter Carroll would help run multiple public meetings during the process to keep the community informed, the representatives said.

Mercer County Attorney Ted Dean asked what a “ballpark” cost would be for Brandstetter Carroll’s services.

“Here’s our advice: Select a firm today which you feel comfortable working with and just begin that negotiating process,” she said. “And of course you know, if you can’t negotiate a contract that suits your terms with your first choice, you go to your second choice.”

April Pottorff with CGL told the committee when she visited the Boyle County Detention Center, it was hard to locate, difficult to find the entrance and confusing to know where to go once she got inside. The detention center also suffers from narrow hallways and a lack of daylight in many rooms; and the control room is “claustrophobic,” she said. 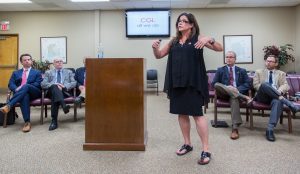 Modern jails that CGL helps build feature rooms with lots of natural sunlight, program spaces and other elements that help influence behavior, such as managed acoustics and movable furniture.

Allen Richardson, a senior planner for CGL, said the most important question to answer is how many beds a jail needs to have. In order to answer that, CGL would conduct a population projection study, looking out 20 years to get a capacity that will serve Boyle and Mercer counties for at least that period of time.

CGL can also analyze how many beds would be needed for different kinds of populations — male, female, special needs, high-risk and others, he said.

CGL would also help develop “building blocks” for design of a new jail, such as how cells should be arranged; study operational costs for the jail after construction; determine whether the existing structure could be renovated; and if a new structure is needed, then where it could be built that would be acceptable to the community, representatives said.

CGL’s process would involve stakeholders early and include public meetings. CGL provided two package options to the committee — an eight-week project that would determine the basics of how big a jail will be needed and how much it would cost to build; and a 16-week project that would go more in-depth with studies that would include alternative programs to reduce inmate populations and provide “a more reliable budget,” according to the representatives.

“This is all we do; I’m very passionate about this,” Pottorff said, commending the counties for their programs already in place that offer alternatives to incarceration. “… Rural counties typically don’t offer alternatives to incarceration, only treatment programs, and a lot of that is a lack of resources. So I commend you on your desire to do that. And that’s why I’m here today, because I’d love to be a part of helping shape that, and set the bar and create a new paradigm for others in Kentucky to emulate, if not across the nation.”

Rather than building a bigger jail to house more inmates, it’s possible Boyle and Mercer could save a lot of money with a smaller detention facility focused on treating health problems and changes to the local criminal justice system, said David Bostwick with HDR. 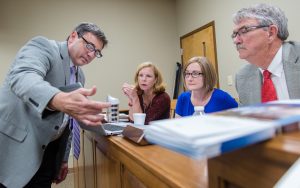 Bostwick showed figures that Boyle’s and Mercer’s incarceration rates are substantially higher than the national average. Nationwide, 230 people are incarcerated for every 100,000 in population; in Mercer County on July 25, that rate was 327, and in Boyle County it was 661, Bostwick said.

“That tells me you’ve got some issues going on,” he said.

If the counties could lower their incarceration rates to the national average, Boyle would save $1.27 million annually and Mercer would save $207,000, Bostwick said.

Doing things like implementing a drug court — Boyle and Mercer are two of only seven counties in Kentucky without one — or increasing the frequency of court hearings could help lower the number of people who need to be held, he said.

HDR would do a cost-benefit analysis for all of the alternative programs that could work in Boyle and Mercer, comparing the cost of implementing the program with the number of beds the program would prevent the counties from having to build, Bostwick said.

Without changing how they incarcerate people on drug charges, Boyle and Mercer could be looking at the need to build a 500-bed facility, which could cost $40 million to $50 million to build and millions a year to operate, he said.

“But if you can find ways … to get the population down, maybe — just maybe — what you’re looking at is probably a 125-bed jail with a 100-bed treatment facility side-by-side,” Bostwick said. “Something like that would be a lot less expensive, not only in terms of size, but also the type of construction … a treatment facility is going to be a lot less expensive to build than a jail.”

Bostwick estimated the counties could save $70 million over the course of 20 years with such a facility, compared to the costs of a 500-bed jail.

Jeri Brittin, a research assistant for HDR who does grant writing and researches funding options that may be available, said it is possible to get 75 percent of the costs for a drug court covered. And there are multiple “evidence-based” programs for reducing recidivism that are proven to work which could help lower the local jail population, she said.

“I think what you have is not really a criminal justice problem as much as a public health problem, and it’s a little bit different way of thinking,” Brittin said. “Community readiness is a really, really key aspect of success in implementing any programs.”

Bostwick said HDR’s needs assessment project would take an estimated 16 weeks to complete and would involve meetings with all stakeholders and public meetings to make sure the public understands the plans and is willing to support them.

HDR would also assess the cost to the counties of “not doing anything” so that those costs can be compared to the cost of a new facility or new programs, Bostwick said.

“This is a public health issue and we have to understand what the collateral damage is of incarceration,” Bostwick said. “If you have someone who is arrested on a minor charge, but they have to sit in jail seven days before that first appearance … they’ll probably lose their job. And if they lose their job, their family hurts, and so they go into distress.

“What we hope — through reducing recidivism, improving the case flow through the system, that won’t happen … we want healthy families and a healthy community.”

At the end of the meeting, Mercer County Judge-Executive Milward Dedman said the “general consensus” of the Joint Jail Committee was that “we need to let this set in.” He said the committee would consider what action to take and which company to choose at its next meeting, scheduled for 1:30 p.m. Friday at the Boyle County Courthouse.