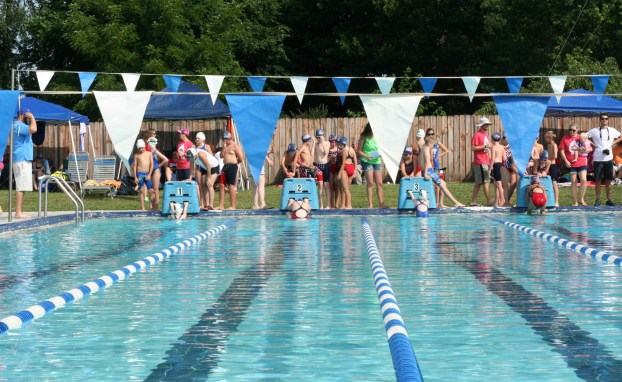 Kendra Peek/kendra.peek@amnews.com Swimmers get ready during a D.A.R.T. Sharks Swim meet in June 2017 at the pool at the Bunny Davis Center. The team, said Danville-Boyle County Parks and Recreation Director John Drake, was conference champions for summer 2017 and relies on the pool each year to practice and compete.

Repairs are going to be required to the deck and tiles at the Bunny Davis Center pool before it can be reopened next year.

In May, when checked by the Cabinet for Health and Family Services, the baby pool received a 100-percent rating, while the main pool was given a 98-percent rating and an “OK to open,” when inspected. It was noted that the pool deck was chipping and in need of repair.

In July, when checked, both pools were scored at 98 percent, and a note on the main pool states, “pool deck in poor repair, must be addressed before next year opening.”

Danville-Boyle County Parks and Recreation Director John Drake said he planned to take the issue before the Parks & Recreation ad-hoc committee in September, but expressed concerns it might not be approved.

Currently, there is $50,000 in the ad-hoc budget for paving, Parks and Recreation Commission Chair Rodger Ross said. That money could be used for the pool repairs if the ad-hoc committee would approve the budget change.

“We have to do (the pool repairs) so the pool can open. I think it’s more important to open a pool than repave a parking lot,” Ross said. “I would like to see us get the most use out of (the money).”

Other commissioners agreed that opening the pool was most important.

“It has to be done,” Commissioner Heather Wheeler said.

Even if the pool eventually gets taken out of use and a new pool is built, Commissioner Jeff Thornton said that wouldn’t be until a few years down the road.

“We are at least going to live out of that pool for a year or two,” he said. “I can’t imagine if this is so critical, they would say no.”

He also pointed out that there was a timeliness issue — repairs need to be done sooner rather than waiting until May, which might cause the pool to open late.

Ross said he had been told by people that the pool isn’t heavily used, but that’s a myth. A day camp is run out of the Bunny Davis Center; the D.A.R.T. Sharks swim team; and many families use the pool, he said.

Wheeler agreed, adding that there was data proving how many people used the pool.

“You could ask the question: If the pool were in better repair, how many more people would come?” Thornton said.

Less than $40 was spent on the pool maintenance this year, said Logue.

Wheeler suggested getting the summer programs and the swim team families involved in the process in order to prove the importance of the pool.

“It’s easier to say no to you than to swim moms,” she said.

The number of cases the Boyle County Sheriff’s Office is handling is on the rise, but the number of overtime... read more