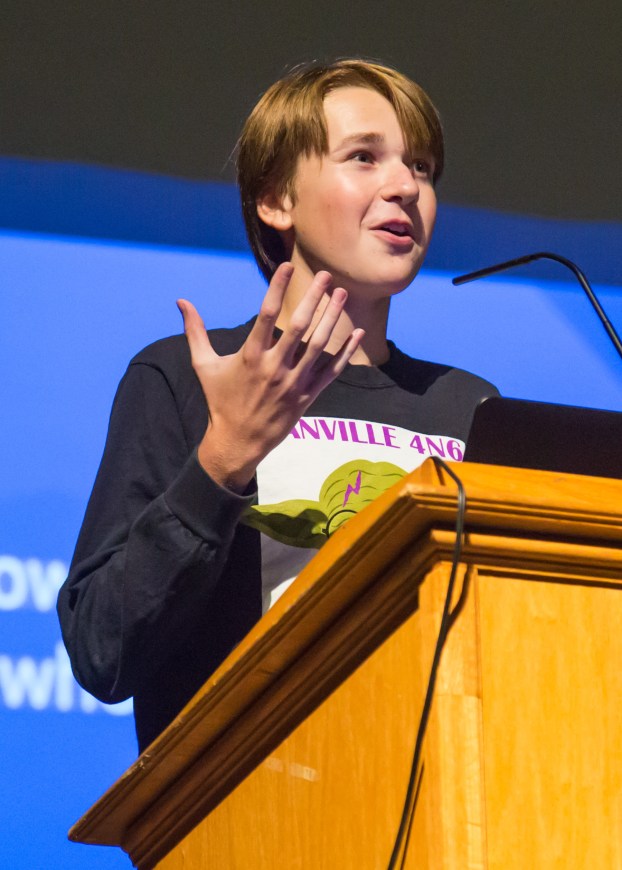 Danville students will officially return to school on Wednesday, but three high-schoolers returned a few days early on Friday, to provide inspirational stories at the district’s kick-off event for the year.
Three members of Danville Forensics — Charlie Hall, Joseth Warner and Becky Mohr — were the highlight of an hour-long welcome-back event held in Gravely Hall before teachers began splitting up to do small-group work.
“You may know me better from a 2010 production of ‘The Emperor’s New Clothes’ that took place on this very stage, starring yours truly,” Hall began his speech. “Standing up here singing multiple songs in underwear … with a smiling face was not easy. And that was third grade at Jennie Rogers and that was when I moved from Columbia, South Carolina, to Danville, Kentucky.
“Everything was new to me; I didn’t know my classmates; I didn’t know my teachers. I didn’t really want to be in Danville because I wanted to be back home in South Carolina. Throwing myself in a musical or any situation that was unusual to me was the absolute last thing that I wanted to do.”
But teachers and staff alike helped him feel at home.
“For me, it was small moments before and after class that probably didn’t seem important to you at the time, but made me feel as if I had a team invested in me, or a team rallying behind me wherever I go,” Hall said. “That feeling was with me when I was the new kid standing up here singing in my underwear, and I still feel that walking through the halls of Danville High School — but I’m wearing pants this time.” 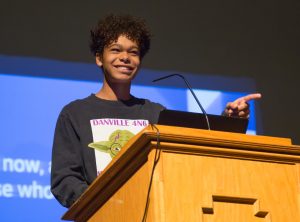 Warner told the mostly full auditorium of district employees about how during his sophomore year, he decided to really push himself and succeed. He applied to participate in the Governor’s School for the Arts, but didn’t get in — but that was OK.
“To these teachers and to your real friends, it doesn’t matter where you come from or who you are; it matters what you do and how you act and how you represent yourself,” he said.
However, someone else subsequently dropped out and Warner was invited to fill the empty slot. Participating in the GSA program helped Warner solidify his passion for acting and theater.
“I fell in love with life and what I wanted to do with my life,” he said. “But none of this would have happened without every single person in this room and everyone outside of this room, so thank you.” 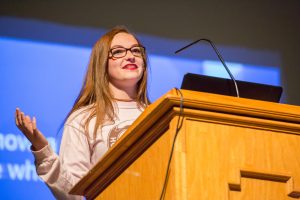 (Ben Kleppinger/ben.kleppinger@amnews.com)
Becky Mohr thanks Danville teachers and
staff for helping her as a student.
Mohr said she came to Danville after attending a Catholic school where “I was made to wear skirts every day, which is not the best.”
“I moved to Danville and suddenly everything was really different,” she said. “I went to a public school and I was allowed to wear pants. And also, I wasn’t going to church all the time during school; I had to find other things to do.”
Mohr said the teachers and staff at Hogsett Elementary helped her through the transition.
“All these people were kind of rooting for me and I was just this grumpy kid who didn’t want to be there,” she said. “But they ended up really teaching me how to read — which I knew how, but (how) to really immerse myself into it and love it.”
Mohr moved on to Bate Middle School, then Danville High School, but she entered as a nervous freshman unsure how she would fit in.
“One of the teachers that has basically gotten me to where I am is Mrs. Branson — I honestly don’t know where I would be without her,” she said. “And Mr. Meadows — man, he can get on my nerves, but in the best way; he’s always there.”
After three staff planning days last week, Monday is opening day for staff in the Danville Independent School District. Wednesday will be the first day of school for students. 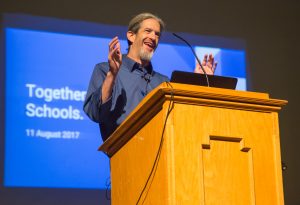 (Ben Kleppinger/ben.kleppinger@amnews.com)
Danville Superintendent Keith Look warms up the crowd prior to the students’ speeches.

The Boyle Mercer Joint Jail Committee did not select a consultant for its jail study Friday, but the members were... read more