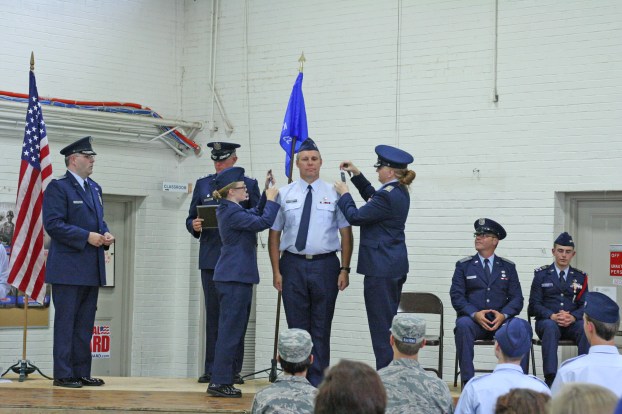 Perryville resident Nick Birt has been posted as the commander of the Stuart Powell Cadet Squadron of the Civil Air Patrol, based out of Stuart Powell Field near Junction City.

The event took place in a ceremony held Monday night at the National Guard Armory.

“I’m looking forward to the challenge of continuing to build the squadron,” Birt said.

Birt, who was promoted to the rank of First Lieutenant, replaces Major Jill Smith, who has been the squadron commander since it began in June 2016, and is stepping down to assume a different position with the Civil Air Patrol.

“I just want to thank everyone in the Stuart Powell Squadron,” she said.

Smith commended those who had been a part of the group, especially those who participated in the beginning. She shared how proud she was of the group and how quickly it had grown.

“Our goal was to get 15 cadets. We have surpassed that,” Smith said.

After giving a short speech, Smith gave challenge coins to squad members, families and others who had been instrumental in the squadron’s formation and early growth.

When Birt spoke, he explained how he first became involved with the Civil Air Patrol last summer — his daughter Chloe joined first.

“Then I got recruited,” he said, smiling. “(Smith) said ‘If you could drive the van, that would be great. Chaperone the kids a little bit.’ In the last year, I’ve been cold and wet, hot and wet, just wet. Bored, tired, emotional. Sat around campfires. Sat in vans for hours … It’s been an absolute pleasure.”

He thanked Smith for her leadership and training over the past year.

“Now it’s my turn,” Birt said. “I have a great group of senior members staying with me … I have an incredible group of kids who both and inspire and infuriate me.”

He also thanked the leadership, the families and the squad for their faith in him.

Lt. Colonel Evan Harrod and Colonel Darrell Williamson were present and addressed the squadron, the families and the community members.

Gooch closed out the ceremony, encouraging family of the cadets and community members to consider joining the squad as senior members.

“We’ve been talking about the big plans we have. You come back next year, hopefully not for a change of command, but if we’re doing something like this, this room might be full of cadets,” Gooch said. “We have a one-year goal of having 50 new cadets.

“I think we might be able to hit that in the next three or four months.”

Cadet Major Ryan Hebert was also promoted from rank of Cadet Captain during the ceremony.

Ann Mosley was at her job at the Ephraim McDowell Wellness Center last winter when a couple of friends driving... read more