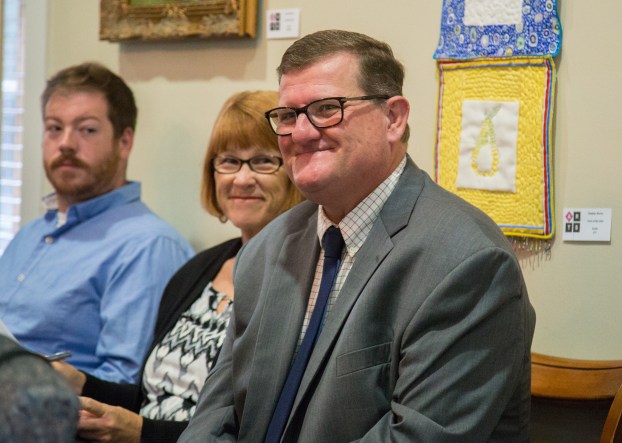 Ben Kleppinger/ben.kleppinger@amnews.com
Hal B. Goode, current president and CEO of the Kentucky Association for Economic Development, smiles as he is announced Wednesday morning as the new chief operating officer for the Danville-Boyle County Economic Development Partnership.

Boyle County has hired the president and CEO of the Kentucky Association for Economic Development to serve as the new chief operating officer for the local economic development agency.

Hal B. Goode was introduced Wednesday morning at the board meeting of the Danville-Boyle County Economic Development Partnership, also known as Develop Danville.

“It’s a red-letter day for Boyle County, not only because school is starting in both districts, but we have a new first-time staff position being filled by a consummate economic development professional, by someone who is not only well-known in our region, our locality, but on a state level,” EDP President and CEO Jody Lassiter said.

“The threads of the job description came together in one firm rope, which came to Hal B. Goode,” he said. “… Hal definitely rose to the top.”

“I’m humbled to be here this morning,” said Goode, who lives in Washington County and serves as a magistrate for that county’s fiscal court. “I look forward to the work and working together.”

Goode said he sat down with people from the EDP four times during the hiring process.

“More and more I heard about the vision that Danville and Boyle County is looking towards, and I’m so excited about being a part of that team,” he said.

Goode’s first day on the job is Tuesday, Sept. 5.

Goode is “no stranger to Danville and Boyle County,” according to a news release on his hiring issued by the EDP. His career began at Danville Office Equipment, where he worked as a sales representative and purchasing agent for eight years. “He has also served as a member of the Ephraim McDowell Health Care Foundation’s board of directors,” according to the release. 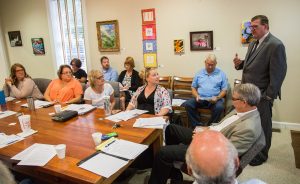 “I’m excited about being here,” Goode said Wednesday morning. “I’m excited about getting to know the folks that I don’t know, but I’m also looking forward to rekindling a lot of relationships that I had here many years ago here in Danville and Boyle County.”

The EDP board welcomed Goode with a round of applause.

“We are extremely fortunate and excited to have someone of your caliber joining us,” Nelson said.

Lassiter said prior to Goode’s current position at the helm of the Kentucky Association for Economic Development, he worked as the executive director of the Springfield/Washington County Economic Development Authority (SWEDA). Goode and Lassiter have also worked together through Kentucky United, a coalition of economic development agencies working together to attract business to the state.

Asked later Wednesday whether Goode’s position as magistrate in Washington County could create any conflicts of interest with his work in Boyle, Lassiter said no.

“He recused himself from any votes regarding SWEDA during the time he served as magistrate and SWEDA director,” Lassiter wrote in an email. “Any possible conflict or appearance thereof would be treated similarly.”

• Boyle County Judge-Executive Harold McKinney: “The contacts and experience he brings will prove invaluable. His experience as a magistrate will also help him understand the decision-making process local governments go through.”

• Danville City Commissioner Kevin Caudill: “I think Hal will be a huge asset. I look forward to the relationship.”

The EDP approved hiring the new position in its 2017-18 fiscal year budget. The budget includes as much as $75,000 annually for the position. The job duties include providing services to local businesses so Lassiter can focus on attracting other businesses to the community; fundraising from the business community for the EDP budget; and helping with workforce development.

Addition of the position created a lengthy debate at the EDP’s June meeting, with several Danville officials questioning how certain the funding for the job is. The EDP’s budget anticipates receiving $40,000 from the City of Danville that will only be given as a “matching grant” for other new contributions to the EDP; and it counts $30,000 in new “Chairman’s Circle” donations that haven’t been raised yet.

Nelson has said the EDP will do whatever it can to raise the planned funds, including starting a community campaign, asking individuals to contribute any amount and be matched by the city. If the EDP doesn’t get the funding, Nelson said he will recommend cuts in other areas rather than to the new position.

“We need additional talent to help drive the economic development of this community. That is first and foremost the primary objective,” Nelson said in June. “If I fail on my revenue side, I will slash additional expenses to retain that head count.”

In Wednesday’s news release, Nelson stated that Goode “is one of Kentucky’s most recognized and respected economic development professionals. It is a testament to our partnership’s reputation in Kentucky and beyond that Hal sought the opportunity to join our team.”

Goode said he plans to “take what I’ve been able to put together the past 28 years” and use it to accomplish the EDP’s goals.

“I look forward to working for this group,” he said. “… I’m a hard worker and I will work hard. I like working with teams.”

Perryville resident Nick Birt has been posted as the commander of the Stuart Powell Cadet Squadron of the Civil Air... read more