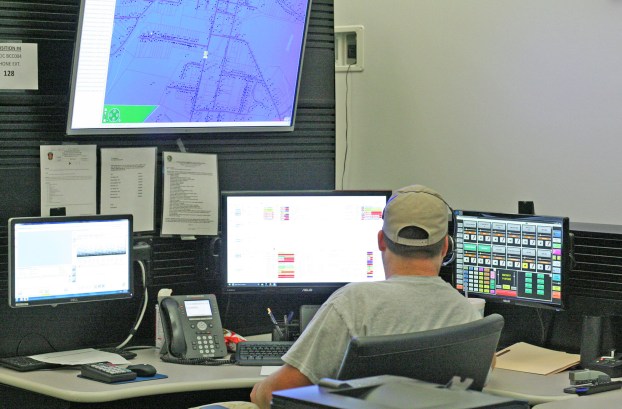 Officials at the Bluegrass 911 Communications Center say there’s some bad information out there regarding the potential for Boyle County and the City of Danville to merge with their existing center in Garrard County.

“We’re excited about the possibility of Boyle County merging with us,” said Garrard County Judge-Executive John Wilson, who said he wanted to address “rumors and misinformation” that has been put out by others concerning the plan.

Boyle County officials have been looking into the possibility of using Bluegrass 911 to handle local emergency calls, instead of the 911 call center in Danville. Under such a plan, if Danville did not also merge with Bluegrass 911, calls in unincorporated portions of Boyle County — and in Junction City and Perryville if those cities followed the county — would go to Bluegrass 911, while calls made in Danville would still be handled at the Danville center on Hustonville Road.

“First, one of the things that I continue to read in the paper is that the (financial) numbers that have been provided are only good for the first year, which is incorrect,” he said. “The proposed interlocal agreement that would govern this is that, moving forward, all costs would be shared equally between the three counties.

Those costs would not fluctuate, he said, but stay divided equally.

The reason Lincoln and Garrard counties are comfortable with the equal split, Wilson said, despite their volumes being less than that of Boyle County, is that it will save their counties in the long run.

“It will save all three of us a significant amount of money because you’re creating economy of scale and sharing resources,” he said.

Currently, the Bluegrass 911 Center has 13 dispatchers, with three to four working together at a time. The center has received a grant to add two more stations, regardless of Boyle County’s decision. If Boyle County, including Danville, were to join the center, they would add two more dispatchers beyond that, according to Russ Clark, director of the Bluegrass 911 Center, making it a total of four positions being added in the near future.

Wilson said they have two positions open, which they are waiting to fill until they know if the merger will happen — if so, they want to fill those with people from the Danville 911 center, so they would be more familiar with Boyle County. Those dispatchers would also receive compensation for their commutes, he said.

Candy Wilson, assistant director of the Bluegrass 911 Center, said officials are hearing many of the same concerns now that were raised when Garrard and Lincoln counties merged 911 efforts to create Bluegrass 911 10 years ago. Concerns then and now include that one county would get better coverage than the other, there would be delays in response from the center and more, she said.

But with Bluegrass 911, “No one can tell the difference … There are citizens in Lincoln County that don’t know we’re not located in Lincoln County,” she said. “It doesn’t feel like I’ve ever dispatched for any place but Garrard and Lincoln. I don’t remember not dispatching for Garrard County, too — they’re my people, too. I don’t see a difference.”

Clark said he thinks the merger idea is similar to when the AT&T long-distance center closed in Danville many years ago, switching to a more regional approach and “no one knew.”

John Wilson said “dispatchers don’t care what area you are in.”

On the screens, he said, they see the counties not by their lines, but by their coverage areas. Were a merger to happen, Boyle County would simply be adding more coverage areas to the Bluegrass 911 map, he said.

And “Many times, it might be someone from Boyle County answering the call,” he said.

To make the switch happen, “trunk lines” — the main data lines that carry calls to the 911 dispatchers, would have to be switched to run to Bluegrass 911 instead of Danville, according to Bluegrass 911 and Garrard officials.

If only Boyle County switched, but Danville chose not to, Clark said they would make the switch and just forward back those calls that go to Danville — something he said is possible with the push of a button.

The rise in the use of cell phones, Wilson said, means transfers of 911 calls already happen, as cell network towers send calls to the nearest 911 center, which is not always to the right county.

“There’s no delay,” he said. “It’s disingenuous to suggest that’s happening. There was actually a very serious case — a shooting that happened in Boyle County, the call came into here. No delay at all.”

Candy Wilson, who came from Lincoln County and started working as a dispatcher before the merger, said it was because of that merger 10 years ago that Garrard and Lincoln counties were able to maintain their dispatch — if they had not merged, they would have been forced to close.

“This allows us to be forward-thinking in our technology and update it on a regular basis, so we’re never behind. No county could do that alone. There’s no way,” she said. “Together, Garrard and Lincoln have been able to stay on top of everything. While we might be small and a rural area, we’re not rural in our technology.”

“Our’s is top of the line, it’s the most modern equipment available,” John Wilson said. The equipment currently used in Danville, he said, is what they were using 10 years ago when the center was created.

According to an article published in the July 21 edition of The Advocate-Messenger, Nick Warren, IT director for the city of Danville, stated that the Danville 911 Center’s equipment is about 20 years old. But Danville is planning an upgrade to “next generation” equipment this fiscal year, with a target of spring 2018 for the new equipment to be in operation.

“The equipment here is literally the most up-to-date equipment that exists on the market. We feel like we’ve been able to do that through efficient management. We’ve been very aggressive on the grants … and also on federal monies that we’re able to receive that Boyle County is not,” John Wilson said.

Due to its proximity to the Blue Grass Army Depot in Madison County, Garrard County qualifies for grants through the Chemical Stockpile Emergency Preparedness Program — grants that are not available to Boyle County or Lincoln County separately.

Clark said Bluegrass 911’s systems are hosted remotely, which allows updates to be done easily. He explained that the equipment being used at the center is “as up-to-date and ready for Next-Gen 911 as any dispatch center in the state of Kentucky.”

“We’re ready to move forward as soon as the state gets their plan solidified. They’re working on it,” he said.

When the state plan is in place, it will equip centers to receive text messages from those who need to get help.

In a dire emergency, Clark said, it’s possible to transfer the Bluegrass 911’s calls to another center in the regional network, thanks to a shared host. The dispatchers would be able to go to the other 911 center, log in, and resume coverage with no problems, he said.

Bluegrass 911 also has emergency medical dispatch services and has been providing that for “some time,” John Wilson said.

The center also has a grant to train their dispatchers in the same step-by-step standardized method for fire and police calls.

“We feel like we’re able to provide a better service for much less money. And we feel like, at the end of the day, these things should be about just good government,” John Wilson said.

John Wilson said the center has 10 years of budget history to show how efficient a regional approach is.

“We feel like we can rely on those numbers. We know what it costs to staff this center, based on the call volume. We’ve looked very closely at the Boyle County call volume and we know what staffing needs will be and equipment needs will be and we can fund that appropriately with the numbers proposed,” he said. “And it’s significantly cheaper than what’s being provided, with much more modern equipment than Boyle County has currently.”

Wilson said he thinks that’s what made the idea so attractive to the Boyle County Fiscal Court.

“Obviously, there’s going to have to be some additional equipment purchased if Boyle County were to come — that figure is around $200,000. If Danville were to come also, there is a grant available from the state for around $200,000 that wouldn’t cost Boyle County or Danville any money at all,” Clark said, explaining a center has to close for the grant to be applicable.

The costs, said Candy Wilson, are one-time costs and the grant would be a one-time grant.

After the merger, Clark said, all three would equally share the expenses. In the long run, they said, everyone would save money compared to current costs.

“This just really makes great sense. If you’re interested in good government, this merger makes sense,” John Wilson said. “We wouldn’t be interested if there was a big increase in future years.

“Here, we feel like the accountability is better for the agencies we serve,” John Wilson said. “It’s basically a stand-alone entity, where the Boyle County Fiscal Court would have representatives … Everybody would be adequately represented on our board.”

“That way, we can adequately represent the needs of each county,” John Wilson said.

“There has been legislation that encourages centers to regionalize because of the cost savings,” John Wilson said. “We think that trend will continue.”

He said the idea that there were almost 120 centers throughout Kentucky, each with individual directors and dispatchers, was mind-boggling to other states.

“It’s a thing of the future,” Clark said. “It’s easier to merge with someone you want to work with rather than be forced by the state to do something.”

“We will be much stronger together,” John Wilson said. “It’s really in all our interests to do this.”

The merger 10 years ago has produced better paid employees, benefits and equipment, and fewer problems than before, Clark said.

“Some of the employees got a one-and-a-half-times pay increase over what they were making (before),” he said. “I commend the judges of Garrard and Lincoln to be forward-thinking enough to put something together like this.”

Candy Wilson said Bluegrass 911 encourages dispatchers toward continuing education, too, and they receive additional pay increases with each certification beyond their required yearly training.

Candy Wilson said Bluegrass 911 did not “set out to procure” Boyle County.

“They approached us,” Clark said. “I was shocked when they called. I thought they were just coming to look; it evolved into, ‘What would it take to be dispatched out of here?’”

Either way, John Wilson said Bluegrass 911 wants to open its doors to the Danville city commissioners and the Boyle County magistrates to tour the center; some magistrates have already visited, he said.

“Let them make a fully-informed decision based on their own observations, instead of the rumors, innuendos and misinformation that’s been spread,” he said.

“We’re here all the time,” said Candy Wilson. “If there’s questions, we’d be glad to answer them.”