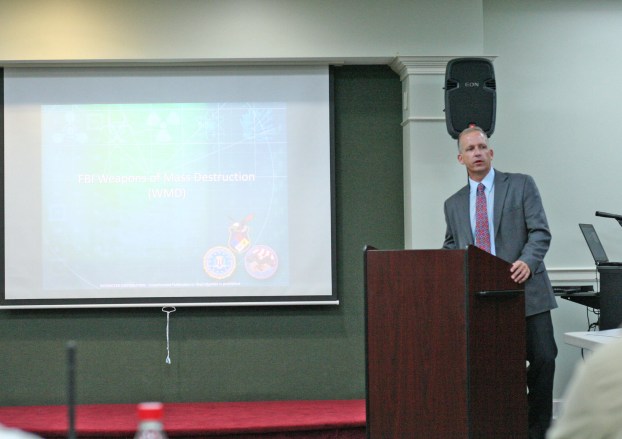 Kendra Peek/kendra.peek@amnews Christopher Hubbuch, Special Agent with the FBI, presented to the Local Emergency Planning Committee on Weapons of Mass Destruction on Wednesday.

Members of the Local Emergency Planning Committee had an opportunity to hear from a special agent with the Federal Bureau of Investigation regarding weapons of mass destruction on Wednesday.

Danville-Boyle County Emergency Management Director Mike Wilder called it “fortunate” that Christopher Hubbard, agent and assistant Weapons of Mass Destruction coordinator for Kentucky, was available to speak to the committee.

Hubbuch said the role of the local emergency planning committees in the state is to know what types of dangers are in their counties, and for industries to be prepared.

Hubbuch’s office and FBI offices around the country are working to get educate local law enforcement, public health personnel and emergency management agencies on how to be prepared for emergencies and how to make sure the right agencies get notified, he said.

Hubbuch was working at Oak Ridge National Laboratory and following a breach at Los Alamos, involving a computer scientist stealing secrets to sell to China, he became interested in the FBI.

“That got me interested in the FBI and what the FBI was doing to counter those proliferation efforts,” he said.

Most recently, after being assigned to three different locations over his career, Hubbuch was moved to the London, Kentucky, satellite office, and is located in Louisville field office.

Hubbuch laid out for the LEPC the many different kinds of weapons of mass destruction, as defined under federal law. WMDs include explosives, poison gas, mines, biological agents, radioactive weapons and more, he explained.

Over the last 10 years, he said, the “WMD Directory” — the list of weapons of mass destruction — has grown, especially with the inclusion of explosives, which formerly fell directly under counterterrorism.

Hubbuch said the role of the FBI is not to keep people from using the materials if they are used for lawful purposes.

“If they’re used in a legitimate industry or purpose, we just try to stay attached to those industries and understand what their vulnerabilities are, what their threats are,” he said.

Hubbuch noted there are some materials that are always illegal to possess, such as sarin gas.

Hubbuch said his work depends on building relationships with industries and businesses so they know what to look out for regarding threats or vulnerabilities.

Those relationships, he said, can also prevent emergencies — if something seems off, the right agencies can learn in time to potentially prevent a theft or an event from occurring.

Training is offered for first responders who are interested in learning more about what to look for and how to respond in certain situations.

Currently, Hubbuch said, the most common WMD issue he deals with is letters with a “powder” inside.

“Thankfully, most of the letters we are seeing right now are hoaxes,” he said.

Photo submittedWork by Caitlyn Kidd-Bunch will be available for purchase at the Tastes, Talents and Tunes event. Patrons can also... read more