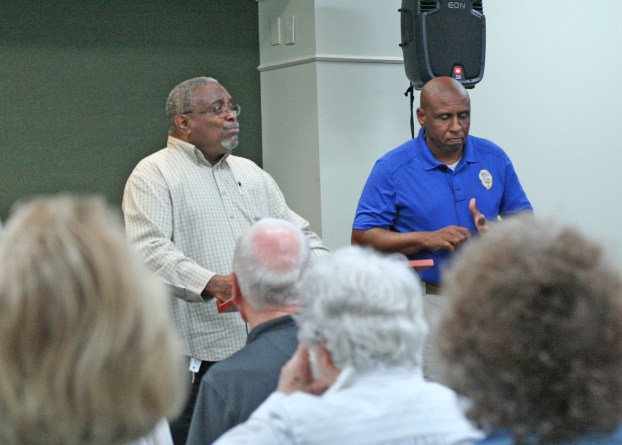 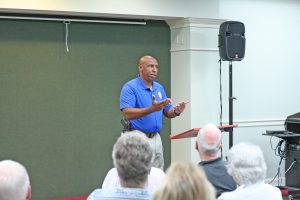 Combating drugs is complicated — that’s one of the messages shared by Danville Police Chief Tony Gray on Tuesday night during a talk hosted by the Friends of the Library.

Drug traffickers, Gray said, are a lot smarter than people give them credit for.

He chatted with members of the public about a variety of topics — from traffic woes and speeding, to the DARE program, to drug sales and overdoses.

One topic was the DARE program, which was a popular way to encourage school students in the 90s to avoid using drugs or alcohol. Its popularity fell later that decade, Gray explained, because more teens were getting into drugs and its effectiveness was questioned.

Gray asked with what age of students the DARE program worked with and someone in the crowd said fifth-grade students. “That’s probably too late nowadays,” Gray said.

There is national funding to bring the DARE program back, he said, and it is regaining in popularity. Cigarettes are often one of the first things that kids tend to try that opens the door to try other things, he said.

Gray was asked about the overdose deaths in Boyle County, but said he didn’t have a number for how many there have been. He shared there were five deaths in a span of nine or 10 days, but that was a little while back and a large number for the community.

The drug fentanyl, Gray said, causes many overdoses because heroin is often laced with the much stronger opioid, causing users to overdose. The Danville Police Department is being trained on how to use naloxone, a drug that stops the effects of opioids and can reverse an overdose.

“That training is for us, in case one of us overdoses or gets exposed,” Gray said, explaining that more law enforcement officers were being exposed to the drug. In Philadelphia, he said, several officers had overdosed, simply by inhaling a powder as it puffed out of a bag they were closing.

One of the reasons drugs hit Kentucky so hard, Gray said, was the fact that interstates 64 and 75 intersect here. 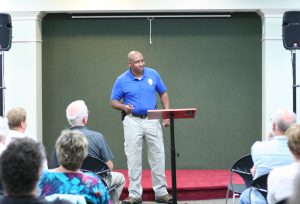 “Kentucky is the heartbeat of America for trade,” he said. That makes the state a big one for the drug industry too, because from Kentucky they can get anywhere in the country easily.

Another person asked about methamphetamine use in the county.

Prescription pills, he said, were popular, but then became expensive and difficult to obtain with stricter regulations. Somewhere around 2008, methamphetamine began to pick up. There were never a lot of meth houses in Danville, Gray said, but there were some in the county.

Meth, he said, is cheaper than some drugs and offers a longer high. Police eventually began cracking down on meth, which led to people switching to heroin and ultimately, that led to fentanyl and the large numbers of overdoses, he said.

“We enact laws to fix certain things and the crooks find a way to do something else,” Gray said.

He said his department works well with the Boyle County Sheriff’s Department. But both face staffing issues.

“Why do we have a drug problem? I sometimes answer that with, ‘We have a Cracker Barrel,’” Gray said, with a slight grin, as laughter filled the room.

He went on to explain that the Cracker Barrel in Danville was one of the first for the restaurant chain not located near an interstate, because they recognized at the time that Danville serviced more than just Boyle County residents — people visit from neighboring counties to spend money and entertain themselves.

“We’re not just policing Danville and Boyle County. We’re policing those people also,” Gray said. In that same way, drug dealers, while they may not reside in Boyle County — many don’t, he noted, because “law enforcement agencies have run them out of the county” — will use Danville as a place to meet to conduct transactions.

“It’s taken us a while; we’ve been behind the eight ball,” Gray said. He said a regional approach is going to be the way to handle it, coordinating with neighboring cities and counties.

Parking lots at stores are popular places for drug deals to occur, he said, because there’s not a lot of cameras and people meeting up don’t necessarily stand out as much.

“(Dealers) are smart, a lot smarter than most people give them credit for,” Gray said. “They’re not dumb.”

Gray said the department does use informants sometimes.

Another big topic was traffic. “I hate it. It’s terrible. I can’t fix it,” Gray said, meeting scattered laughter.

The Danville Bypass intersection by Liquor Barn and Kroger was one topic of interest — Gray agreed traffic there is going to get worse. A Starbucks is slated to open near the intersection next year, and commercial development across the bypass could further add to the amount of traffic at the intersection.

Gray said he’s not sure what the answer is there, but it will fall on the state, which is responsible for U.S. 127, to handle it.

Downtown traffic was another subject. Gray said most pedestrian-involved wrecks in the downtown area are left-hand turn wrecks, when the pedestrian walks alongside a car that is turning and the driver fails to see them.

He hopes to someday get a traffic unit on a motorcycle or a bicycle to help manage traffic downtown; a car cannot navigate traffic as easily. Staffing levels currently prevents a motorcycle unit from becoming a reality, he said.

“It’s all about staffing,” he said.

Gray said he currently has 30 officers and is allotted 36. He hopes to some day get up to 40.

On a good day, Gray said he has five officers on per shift. The city is split into three sectors and one officer patrols each sector. That leaves two to respond if an extra officer is needed, such as for domestic violence calls.

Unfortunately, Gray said, his department is a call-driven department, responding to about 45 calls a day.

“Forty-five calls a day doesn’t seem like much,” he said, but said they can stretch officers pretty thin. “Staffing gets eaten up real fast.”

Roads less traveled There’s another side to Boyle County that many people don’t know about and never see. While many... read more