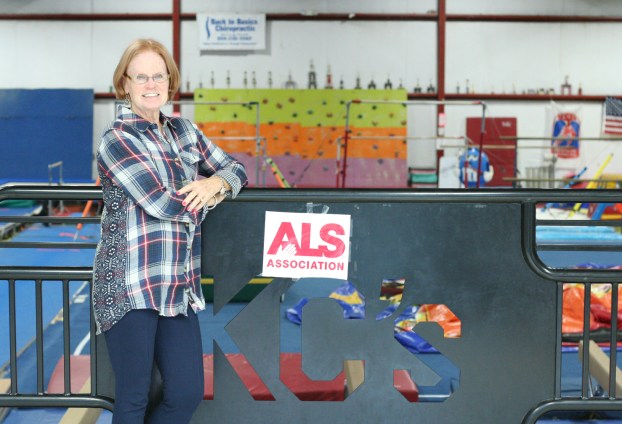 Kendra Peek/kendra.peek@amnews.com Kathy Case in the gym she built with her late husband, Mike, before he lost a battle with ALS. Kathy Case is now on a quest to raise awareness and resources regarding the incurable disease. 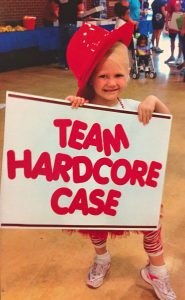 Photo submitted
Kylie Landversicht, granddaughter of Mike and Kathy Case, holds a sign for Team Hardcore Case, in memory of her grandfather Mike Case and his battle with ALS.

What started with a problem in his foot led to the death of a Danville man, and started his wife on a journey to raise awareness and money for amyotrophic lateral sclerosis — known as ALS.

“I’m on this journey because of how it affected my friends, my family and everyone,” said Kathy Case, owner of KC’s Gymnastics on Letton Drive in Danville.

She and her husband Mike had been married for 42 years when he lost his fight with ALS in 2013.

Now, four years later, she and Team Hardcore Case are hosting the first-ever KC’s Gymnastics ALS Run to Remember on Sept. 30 at Millennium Park. The money raised will be donated to the ALS Association, a not-for-profit organization that promotes research and provides assistance for those dealing with ALS.

ALS affects people in different ways, but for Mike Case, it first appeared as an issue with his foot.

“ALS is hard to diagnose. Especially, you don’t think all of a sudden you have ALS. It took us several doctors and then we went to Vanderbilt and got a second opinion before we found out what we were dealing with,” she said.

Kathy Case had just retired from her job as a physical education teacher at Stanford Elementary School when they learned of the diagnosis.

“I remember telling the doctor after we got the diagnosis, ‘He can’t have this, I just retired,’” she said. “It sounds really dumb, but you’re trying to absorb all of this.”

When they came out of that appointment, she said she also remembered thinking the doctors were talking to her a lot, even though her husband was the one with the disease.

“I didn’t realize at the time, as a caregiver, it was going to be my responsibility to do all of these things,” Case said. “I would do them over and over again.”

Her husband was still working as a physical education teacher at Hustonville Elementary School at the time. He continued  for a few more months before retiring. She said he wanted to stay longer but was having difficulty with swallowing without choking.

“He was going to retire at that Christmas (2011), but he was afraid he was going to scare the kids because he was having trouble breathing. It’s scary and it was a scary scene,” she said. “He went ahead and retired shortly before Christmas.”

Mike Case lived two and a half years after his diagnosis in 2011, dying at the age of 62.

Case said the ALS clinic in Lexington was helpful to the couple, and especially to her — she was able to find support groups and connect with other caregivers going through the disease. One lady Case particularly connected with; the two lost their husbands within about five months of one another. They walked along the journey together, she said, and continue to do so, traveling together and talking regularly.

‘Trapped in a body’ 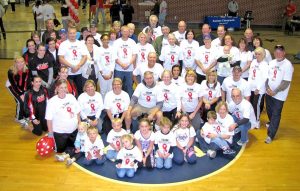 Photo submitted
Team Hardcore Case, in memory of the late Mike Case, center, and his battle with ALS.

More and more people are living with and dying from ALS.

According to the ALS Association, a little over 6,000 people in the United States are diagnosed each year and there are about 20,000 Americans with the disease.

ALS is a progressive neurodegenerative disease that affects nerve cells in the brain and spinal cord. It was discovered in 1869, but gained widespread attention in 1939, when Lou Gehrig was diagnosed; it’s also known as Lou Gehrig’s Disease.

It is most commonly diagnosed between the ages of 40 and 70, but sometimes the disease strikes those in their 20s and 30s. It is more common in men than women, however as the population’s life expectancy increases, the cases between men and women are beginning to equal out.

“I remember hearing about (ALS) when I was younger, thinking, ‘Oh my gosh, how awful would that be, to be trapped in a body,’” she said. “None of his muscles worked, I had to feed him, he couldn’t use his arms, his legs. But his brain was fine, he just could’t talk.

“It is just a devastating disease for anyone.” 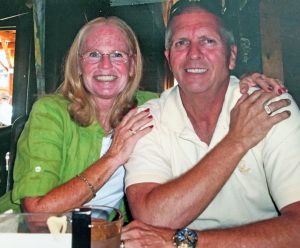 Photo submitted
Kathy and Mike Case, before he was diagnosed with ALS.

“I was a gymnast when we started dating at Eastern. To see me, he had to keep up with me,” she said, laughing. “I was always at the gym working out … My mother said, ‘Don’t go to college and marry the first guy you meet.’ Well, didn’t pay much attention there. Of course, it lasted 42 years, so it was a good thing.”

She taught him all about gymnastics, how to spot, hold kids, catch them and more. They went to clinics and meets, working alongside one another. After college, they relocated to Harlan, where one of Case’s most determined students was living and whose parents offered to help the Cases open a gym if they would make the move.

After about three years, they had paid everything off and felt it was time to move elsewhere. That’s when they found Danville.

“A friend of our’s was a principal at the time in Boyle County and he said, ‘Why don’t you come look at Danville?’ It was close enough at the time to Lexington — Mike’s parents were in Lexington,” Case said. “We heard it was a great place to raise kids.”

The couple first moved their business into the old East End Elementary, which no longer stands. Then they moved into the Southland Plaza for several years before opening on Letton Drive.

Case said she also taught Jazzercise for a few years, in addition to teaching school and teaching gymnastics.

“I always had like three or four jobs. I’m one of those kind of hyper people — people laugh at me, they call me the Energizer Bunny,” she said, smiling, but adding that her husband was able to keep up the pace.

Their daughter, Kristi, took gymnastics growing up and now lives in Nicholasville with her husband Kurt Landversicht and their three daughters. She helps her mom teach at KC’s Gymnastics.

“I think he would like that,” Case said, sharing that her granddaughters take lessons there, too.

Their son, BJ, took wrestling, and now lives with his wife Kim in Casey County, with their two sons and helps with the wrestling team at Boyle County Schools.

The youngest grandchild is five, and they all remember him, she said.

“They will say, ‘We miss Papaw. We know he’s in heaven,’” Case said. “They’re excited about doing this run and raising money for ALS.”

Case said she thinks part of what made their marriage work so well was their shared interests, but also the ability to do things separately at times.

“We both enjoyed doing the same things … We both traveled, we were P.E. teachers. We both ran the gym.”

The two would travel in an RV sometimes and bought one to use.

“We always said we were going to go to the East Coast, but whenever it was time for a vacation, we always went west,” she said, smiling wistfully. “I sold that. You had to sell things to buy the handicapped van, and do this and do that.”

Before the disease took hold, Mike Case liked to hunt and would go with his friends to do so, she said, which is when she’d go judge gymnastic meets. Sometimes, they would go target shooing together.

“We were just active people before this hit and were ready to embrace the retirement part of life,” she said. “It was time to start doing stuff for ourselves.”

ALS is still very much a mystery.

“They don’t know what causes it, there is no cure for it, and it can just happen to anybody, which is so strange,” Case said from the office of the business she shared with her husband.

It strikes the healthy as much as anyone, she said, and her husband led a very healthy, active life.

“He biked, he ran, he fished, he hunted. We were both P.E. teachers,” she said. “A lot of healthy people are coming down with this.”

In fact, she said, his hunting buddies called Mike Case “Hardcore Case,” because he would “hunt even when no one else would.”

As he faced ALS, it was that name that became the name for his family, his friends and anyone rallying behind him — Team Hardcore Case. 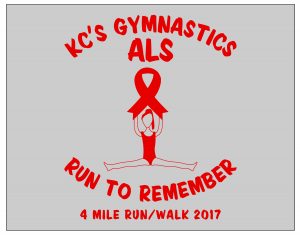 Image submitted by Kathy Case
Shirts for the KC’s Gymnastics ALS Run to Remember are being made by 10th Planet. The logo of a gymnast holding a ribbon was designed by one of Mike and Kathy Case’s gymnasts.

For the first time, Team Hardcore Case is bringing the efforts closer to home, hosting the KC’s Gymnastics ALS Run to Remember on Sept. 30 at Millennium Park.

“I tried to raise awareness and money from the town we’ve had our business in for 40-some years,” she said. “We’re from here. He had a lot of connections in the gym. We’ve seen a lot of kids go through and now we’ve got their grandkids … I just want to make people aware of what this is and maybe help someone.”

The logo being used is of a gymnast holding up a ribbon. It was drawn by one of the girls at the gym, Melody Burke, who has taken lessons.

There will be a DJ, a warm-up hosted by Ann Mosely, a one-mile fun run for kids and a four-mile run for adults.

“It’s a little longer than a 5k. It might entice a bit more of a runner,” Case said. “And if you start and you get tired, you can just come back.”

Even if people aren’t interested or able to walk or run, they’re invited to come cheer people along.

The top three places in each age group will receive and award and every runner will get a shirt; children get a bracelet. Extra shirts will be sold. The Phi Delta Theta fraternity at Centre College is partnering with Case, providing spotters and volunteers.

There will also be a memory wall to honor those who have been affected by ALS or who are currently going through it.

“ALS does change your life forever — that’s for sure,” Case said.

The first KC’s Gymnastics ALS Run to Remember will be held Sept. 30 at Millennium Park. Cost is $5 for children to participate in the one-mile fun run for kids, which begins at 8 a.m.;  $20 for the four-mile run/walk, which begins at 8:30 a.m. Cost for the four-mile run will be $25 the day of the race. Pre-registration is available at runsignup.com/Race/KY/Danville/ALSRuntoRemember or by picking up a form at KC’s Gymnastics, the McDowell Wellness Center or at Danville Bike and Fitness.

The Kentucky State BBQ Festival attracted “around 27,000-plus” to Wilderness Trail Distillery from Friday to Sunday, said Myrna Miller, an... read more