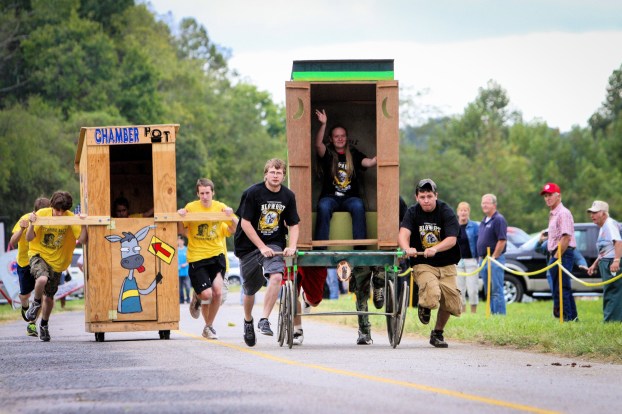 (File Photo/Kirk Schlea) Photographer Kirk Schlea caught a team making its way to the finish line during a past Outhouse Blowout.

Are you privy to the race? Outhouse Blowout races returns this weekend featuring tons of live music, food and history galore

GRAVEL SWITCH — Although Jeanne Penn Lane thought last year would be the final to honor the historic dedication of Penn’s Privy, the Great Outhouse Blowout is back and still standing strong. This Saturday and Sunday will mark 25 years since the first Blowout had participants running to the finish line with teams pulling decked out outhouses on wheels.
A super-special offering this year, Lane says, will be the movie “Blowout,” documenting the Oct. 17, 1992, Outhouse Dedication Ceremonies — the event that brought outhouse racing to Penn’s Store and to Kentucky. 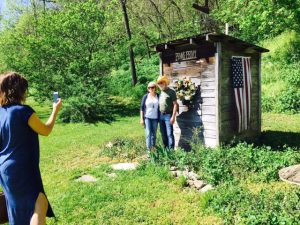 (File photo/Bobbie Curd)
Karen Harryman takes a photo of parents Barb and Dave Harryman in front of Penn’s Privy during a past
event — the outhouse that was dedicated 25 years ago at Penn’s Store and started the Outhouse Blowout races.

“It’ll be shown Saturday on a large screen at dark,” Lane says about the movie, made by the late D.C. May of Marion County and the recipient of the 2017 Crescent Moon Award given by Penn’s Store. World-renowned guitarist Chet Atkins headlined that year’s afternoon concert of Kentucky and Nashville music notables, she says.
The event brought international attention to Penn’s Store, with all major networks at the time, plus CNN, covering the event.
“So, for anyone who did not attend the ’92 Dedication of Penn’s Privy, or those who did and wish to reminisce or those who were not born yet, this is your chance to view what brought outhouse racing to Kentucky,” Lane says. “And continued the event on now called ‘The Blowout.'”
Also to be shown will be a segment of Nashville’s “Tennessee Crossroads” that covered the event. Lane says there’s plenty of folks in the video who many will know, and also many who are no longer with us.
Although there’s a cover charge for the daytime events, the movie is free — Lane says admission will cease being taken at approximately 5 p.m.
Vendors will be onsite offering food for purchase, including Mike Southerland with Brothers BBQ who will cook a whole hog for Saturday and Sunday.
“I’ll also have smoked bologna, bourbon and peach baked beans and coleslaw,” Southerland says.
Pig Horns & Feathers will offer funnel cakes, cotton candy, pork tenderloin sandwiches and more. Cowboy Kitchen will sell Polish sausages and bratwurst. Other concessions will include cheeseburgers, hotdogs, candy, ice cream, snow cones, fresh squeezed lemonade and soft drinks.
Lane says those who attend may want to remember to bring a chair and a flashlight.
Live music goes up at 12:45 p.m. Saturday and continues into the night, featuring Dawn Osborn & Big Boss Band, Stratus, The Stereos and Some Rock Band and Cadillac Tractor. 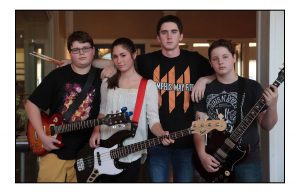 (Photo contributed)
Status is one of the featured bands at the Outhouse Blowout this weekend. The rock band is made up of Lexi and Landon Sarrett, Chase Riggs and John Blades. They originally formed as a part of the Rock School! program at Lexington Music Education, and are currently working on releasing an EP of five original songs. The style of the band is eclectic, with a mix of covers and original songs included in the bands set. The cover tunes they play range from AC/DC to Radio Head to Five Seconds of Summer.

Also, a Blowout Queen and King will be named, both who were 2007’s Blowout Prince and Princess — Lane says they were 5 and 6 years old then. The Blowout Queen is Olivia Graas, a seventh-generation owner of Penn’s Store and daughter of Dawn Lane Osborn and Joseph Graas. The Blowout King is Hunter Welsey Penn, son of Miles Tolan and Angela Penn. Both are great-great-great-great-great-grandchildren of Gabriel Jackson Penn.
A car, truck, motorcycle, antique show and cruise-in will take registrations ($10 fee) from 11 a.m.-2 p.m., and winners will be voted on by participants.
The Parade of Privies will begin at 11:30 a.m. and showcase the specially designed outhouses and award-winners and include anyone else who’s ever wanted to be in a parade, Lane says.
The Outhouse 300 Race begins at noon, and the teams registered so far include: AM Vets (Capt. Brent Pike, Boyle County); Swordfish (Commonwealth Swim Team, Capt. Tasha Singleton, Danville); RBT (Capt. Billy Rigdon, Lebanon); Lexington Loo’s (no captain name, Lexington); and Chamber-Nators, the 2016 Outhouse 300 Champs (sponsored by Clay County Chamber of Commerce, Capt. Tracy Pennington, Celina, Tennessee).
“It’s not too late to get in on the race, either,” says Lane. “To be listed in the official programs, they had to register by this past Monday, but a team can show up Saturday, by 11 a.m., pay their entry fee and get in the race.”
Prizes include cash for the first three teams who place: $300, $200 and $100, plus trophies for third, fourth and fifth places. The Humdinger Award will go the best overall designed “racer” and team, and the Long Haul Award will go to the team traveling the longest distance to get to the Outhouse Blowout.
The top three winners also get free pizza from Papa John’s; special socks from Danville Bike & Footwear will go to the champs; and free yearly subscriptions to Kentucky Monthly Magazine will also be given to the top three teams.
At 6 p.m., a jam session will begin for anyone who brought instruments to join in on. Other musical guests include Jon Nesbitt, Gordon Webb, Steve Sheperson, Dino Musso & Courtney and more. 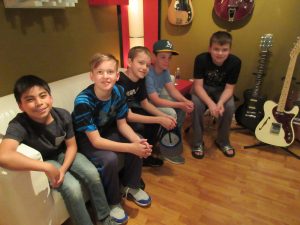 (Photo contributed)
The Stereos will be a featured band this weekend at the Outhouse Blowout, comprised of Will Darragh, William Allen, Hudson Roberson and Gabe Spencer. They formed as a part of Lexington Music Education’s Rock School! program. The band plays mostly classic rock/grunge rock cover songs of such bands as Nirvana, Guns N’ Roses, Credence Clearwater Revival and the Kinks, plus some original songs.

There will be some arts and crafts vendors set up as well, including Yolantha Pace with her books and artistic creations; Avon and Mary Kay vendors; books and art from Darlene Campbell; flowers and produce; candles; and cookbooks by Wilma Brown.
The fun returns 1-5 p.m. Sunday with gospel and contemporary Christian singers and bands, including Tim Readnour & The Melodic Brotherhood, Natalie Berry, The Milby’s, Randy Douglas, Trena and Pattie Douglas and more.
IF YOU GO
The Great Outhouse Blowout gates open 9 a.m. Saturday with the Outhouse 300 Race at noon. Gates open 1 p.m. Sunday.  Admission is $5 for adults, $1 for children 12 and younger. Door prizes will be awarded based on ticket stubs. Penn’s Store is at 257 Penn’s Store Road in Gravel Switch; (859) 332-7706 or 7715; PennsStore@aol.com, www.PennsStore.com. GPS coordinates are N37.549912: W085.028191. Penn’s is located at the junction of Ky. 243 and Ky. 37; at the junction of the North Rolling Fork River and Little South Creek.
You Might Like

Boyle County residents have another opportunity to help those impacted by Hurricane Harvey — a group of three will be... read more