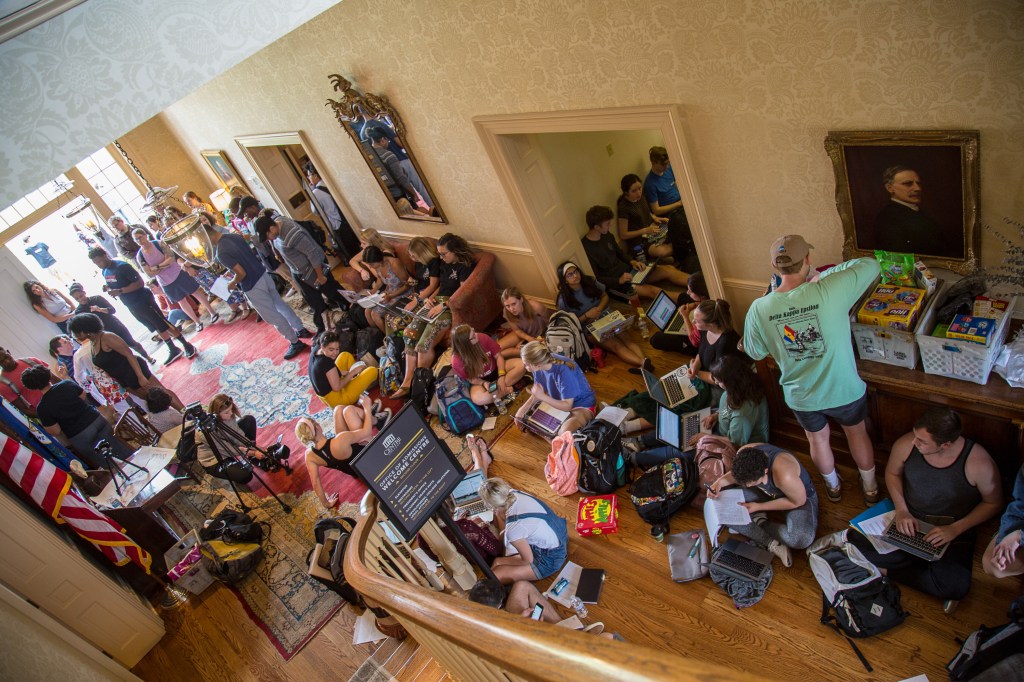 Students fill the entry hall of Old Centre Wednesday as they participate in a sit-in protest over racial issues. (Photo by Ben Kleppinger)

More than 100 Centre College students are participating in a sit-in protest at the Old Centre building today, as black Centre students negotiate with President John Roush over their list of demands concerning the college’s handling of discrimination and racism on campus. Students say they won’t leave until some of the demands are met. 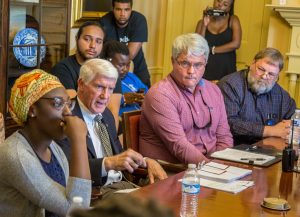 As of 3 p.m., students had informed The Advocate-Messenger that some of their most urgent demands concerning the Department of Public Safety had been met.

Students participating in the protest first gathered at Crounse Hall around 11 a.m., then made their way to Old Centre after a discussion, said Michael Strysick, spokesperson for the college.

“We’re very respectful of their passion and their right to do this, and eager and hopeful to have a conversation,” Strysick said shortly after 12 p.m., a few minutes before President Roush and other Centre administrators joined black students in a conference room to begin negotiations over the demands.

Shortly after 3:30 p.m., after students revealed that some agreements with Roush had been reached, Strysick told a reporter, “President Roush has been eager to have these conversations and appreciates that they have been productive.” 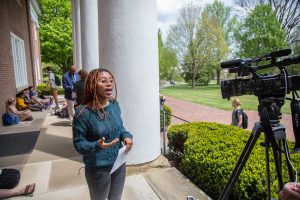 Nahndi Moulta Ali, a junior at Centre from Boston, Massachusetts, gives an interview to a Lexington TV station outside the Old Centre building Wednesday. (Photo by Ben Kleppinger)

Nahndi Moulta Ali, a junior at Centre from Boston, Massachusetts, said there are nearly 400 students who have signed a petition related to the list of demands, which include 44 separate demands concerning college policy and actions in athletics, the Department of Public Safety, dining services, the Diversity Office, Roush’s office and the Title IX Office.

Another student at the protest Wednesday said more than 500 students had signed the petition.

“Racial discrimination is very apparent on this campus,” she said. “… A lot of marginalized students, specifically black students, on campus were dealing with a lot of racial issues. For example, there were a lot of different comments, racial slurs on campus that were brought to attention of administration, but oftentimes swept under the rug. So with the lack of transparency and communication that the administration has had with students in dealing with these types of instances, it is time to step forward and do something about it.”

A “statement of intent” and the list of demands were distributed to the campus community earlier this week, Strysick said.

“That statement ended with a very hopeful and thoughtful recognition of the efforts we’ve made, and then a real interest in building on this momentum, which is something President Roush shares as well,” he said. 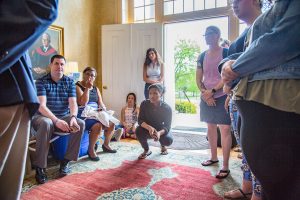 Protesters organize when faculty and staff members allied with students will show up to be a part of the sit-in protest. (Photo by Ben Kleppinger)

“As a result of recent racial incidents on campus targeting black students, WE, a group of Black Students had a safe space meeting to check in and process with one another the events, and from that meeting WE realized that WE were facing similar issues regarding unmet needs, especially in regard to our safety on this campus — across departments,” the “statement of intent” reads. “WE came up with the following demands. … WE are aware of other organizing efforts by other marginalized groups, and we remain in solidarity with the fellow demands and initiatives of these groups. Given the constraints of time and the unique challenges WE face on Centre College’s campus, these demands remain focused on the unmet needs of Black Students.

“Lastly, we acknowledge that Centre College has taken positive and important first steps toward meeting some of the unmet needs of marginalized students. The following demands are in the spirit of sustaining the momentum, increasing transparency and providing more intentional next steps in creating an inclusive environment. Thus, more accurately reflecting the compassionate, understanding and kind community that Centre College aims to be.”

Among the numerous demands are several marked as “urgent” — students said Wednesday they wouldn’t leave Old Centre until those demands were met. They include:

• keeping an officer within the Department of Public Safety (DPS) “on-post at all times;”

• reports about DPS misconduct should not be handled by DPS;

• the “immediate firing” of a specific DPS employee, “given the many instances of racial discrimination against black students;”

• providing a wider variety of food in the college’s dining hall “to accommodate cultural and religious dietary restrictions;”

• accurate labeling of “cultural dishes” in the dining hall;

• that students have “input and transparency” concerning renewal of the contract for the current dining hall food provider, Sodexo;

• that students be “involved in the hiring committee” for the position of associate vice president for academic affairs and diversity initiatives;”

• recruiting and hiring “counselors who reflect the demographics of the Centre College community;”

• that Centre declares itself a “sanctuary campus” for all DACA students, who were brought to the U.S. illegally at a young age and have qualified to remain in the U.S. under Deferred Action for Childhood Arrivals policy (a student protester said Wednesday afternoon this demand has been removed from the list);

• the creation of “a mechanism … to address other needs of marginalized groups on campus;” and

• that the deputy Title IX coordinator “make themselves visible to the campus community through outreach” and “makes themselves available for those going through the (Title) IX investigative process.” 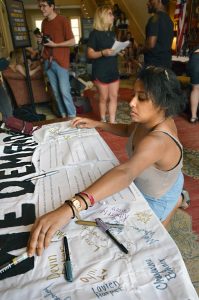 Sophomore Makda Mehari finishes signing a banner that contains the demands of black students on campus. (Photo by Robin Hart)

Title IX is federal Civil Rights law that prohibits discrimination on the basis of sex in education.

According to text messages from Centre junior Je’Coiya Moore, the students and Roush had reached agreement on four urgent demands concerning DPS by 3 p.m.

On the demand of having a DPS officer on-post at all times, “there will be an exploration of options to involve student workers to be on post at all times. This strategic plan will be finalized by fall 2018,” according to Moore.

Centre agreed to have DPS misconduct reports sent to Human Resources, as well as DPS officers, according to Moore.

As for the “immediate firing” demand, “due to the legality of immediate firing, an investigation process will occur but by Monday, students will be notified to what extent the college can be transparent about personnel conduct,” Moore wrote.

And for recruiting DPS officers of color, “active recruitment of officer of color will occur upon the retirement of current DPS officers,” according to Moore.

After Roush had spent about four hours talking with students, Centre’s official Twitter account tweeted, “President Roush has been pleased with the conversations he has had with student leaders throughout the afternoon, which he describes as ‘constructive and productive, though also difficult at times.'”

A few minutes later, the Twitter account tweeted, “The plan is to continue discussions at Old Centre into the evening and arrive at a document that defines concrete steps to take in the coming days and weeks. Everyone involved has been respectful and cooperative.”

Moulta Ali said there have been problems of discrimination and racially charged comments on social media and on Centre’s physical campus that the college has not addressed satisfactorily for students.

“If it’s on media, you have that freedom of speech, however, if you’re on this campus, we are a community of Centre students. How do we deal with these types of situations where students are being targeted but it’s not being dealt with correctly?” she asked. 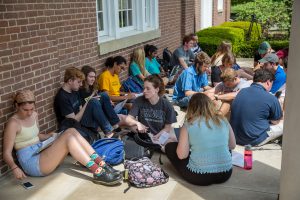 Centre students participate in a sit-in protest on the front porch of the Old Centre building Wednesday morning. (Photo by Ben Kleppinger)

Moulta Ali said on the recent 50th anniversary of the assassination of Martin Luther King Jr., there was a student on campus who was chanting in support for King’s assassin.

“It’s hurtful. It strikes pain,” she said. “It shows that there’s not that cohesiveness of community as Centre has promoted so many years.”

Moulta Ali said there are “allies” — white Centre students, community members from Danville, students from Berea and Louisville, members of the NAACP, Centre alumni and Centre faculty and staff — supporting the black students in their efforts.

“Centre College oftentimes preaches this idea of community and peace, and yes granted it is a community, however it doesn’t feel as if it’s community all the time, and that’s an issue,” she said.

The student group felt its demands had not been addressed by Roush or the college, except “very vaguely” in generalized terms, which is why the protest became necessary.

“Many times these issues of discrimination, these issues of marginalization or oppression or suppression, all these different things have been happening on campus,” she said. “And these vague responses have just been those vague responses and there’s nothing else — there’s no substance underneath that, so it’s very very difficult in trying to achieve our goals if nothing is happening, nothing visibly is happening.”

Through negotiations and by working with Centre Vice President for Legal Affairs James Leahey, students hope to create a document that Centre will agree to, laying out timelines for accomplishing all of their demands, Moulta Ali said.

“We hope that the administration does sign this document or this contract stating that this is going to happen and if not, then it shows you that it’s not a cohesive community as Centre College has portrayed so often,” she said. “… We will be sitting here until the urgent demands are met. The administration has a choice. They have a choice to ignore the grievances of students or actually show up and act on it.” 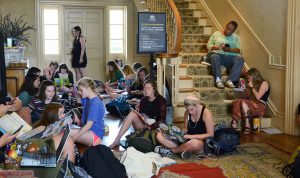 Centre plans to “convert the recently created coordinator of diversity and inclusion programming position from a two-year to a permanent position,” according to the news release.

The college also plans to add a counselor position “focused on multicultural issues, initially in a part-time role,” according to the release.

“… as an extension of recent campus-wide training in the area of Title IX issues, Centre will offer similar training to focus on diversity, inclusion and multicultural awareness,” the release reads. “… additional conversations will address the need for a multicultural center, focusing on near-term and longer-term solutions.”

“Our efforts remain a work in progress,” Roush stated in the April 27 release. “… I respect the way in which our students have shown passion and leadership to advocate for these important changes. We have heard them and are doing what we can, understanding that there are some fiscal constraints.”

The release states that two “well-attended” community forums involving the entire Centre campus have been held recently “on the specific topics of building trust, practical next steps and where we are as a community.”

“There is always more work to be done, and it is challenging and rewarding all at the same time,” Roush states in the release. “… Fundamentally, we are committed to building and strengthening a world enriched by difference, based on the dignity and welfare of others. And this will always be the hallmark of a Centre education.”

As of 8 p.m. Wednesday, Roush was still negotiating with student representatives, according to a protester at Old Centre. Most of the protesters had moved the sit-in onto the lawn in front of the building. The protester said she anticipated the negotiations would be put on hold later in the night and students would be spending the night at Old Centre.