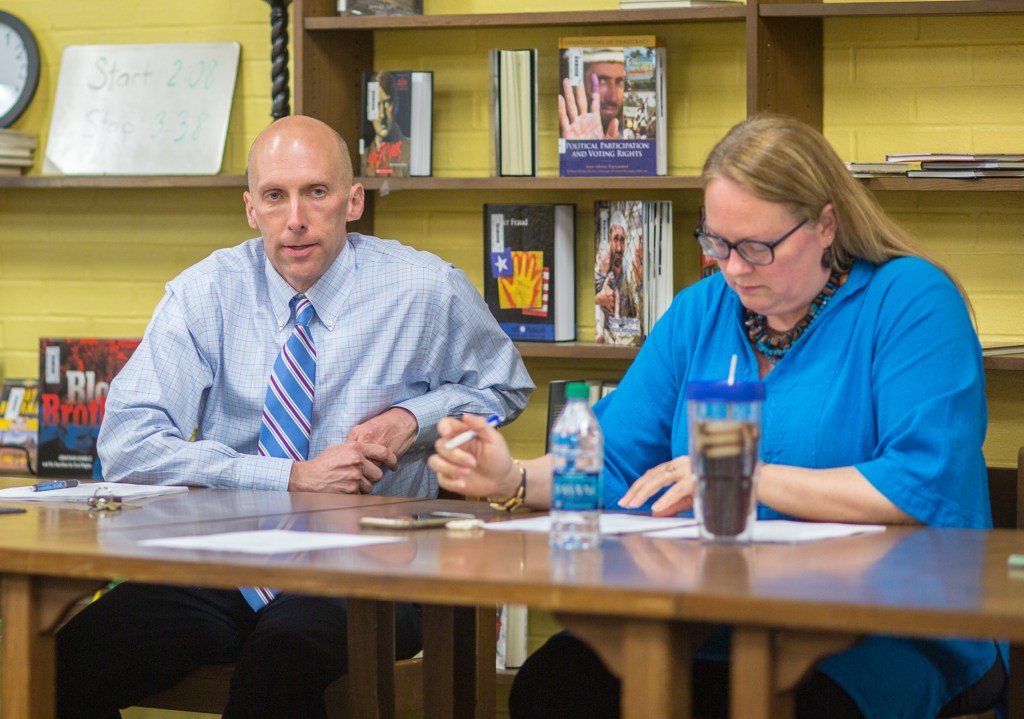 Boyle County Superintendent Mike LaFavers, left, and Board of Education Chair Jennifer Newby prepare to re-enter public session after the board held a 30-minute executive session Thursday night to discuss a lawsuit filed against the school board over the expulsion of a student in February. (Photo by Ben Kleppinger)

An expelled Boyle County junior is suing the school district, alleging it violated his Constitutional rights by expelling him for writing about school shootings.

The 17-year-old, identified only by initials in the lawsuit, was expelled on Feb. 28, after school officials discovered writings on the student’s school laptop about school shootings, according to the lawsuit.

“Despite the lack of any evidence of any specific threat to anyone at the school or anyone else, the (Boyle County Board of Education) elected to expel (the student),” the lawsuit alleges. “Specifically, they required a completion of a psychological evaluation, participation in regular, on-going counseling and the successful completion of a new threat assessment in the summer of 2018. If (the student) complied, he could then make application for admission to alternative school for the remainder of his education.”

The suit was filed in late April; Thursday night, the school board met in executive session for half an hour to discuss its legal options.

Dana Collins, with the Louisville law firm Middleton Reutlinger, is representing the school board in the case.

“We have just been retained in the case, so we are still in the initial stages of looking into the facts and talking to people who are knowledgable about the case. But from what I’ve learned to this point, I believe that the board followed all of the proper procedures in expelling this student,” Collins said Friday. “He was given full due process and .. offered services outside of school.”

After following all the required procedures, the “decision was made to expel him because of the great concern over some very serious threats that were made,” she said.

The lawsuit claims the incidents leading up to expulsion began on Feb. 16, when “unnamed students reported to Boyle County High School staff members that they had seen a writing authored by (the student) which was troubling.”

After taking the laptop, Wade found “further writings” by the student and suspended the student for an additional seven days, according to the suit. After that, Wade sent notification that the student was being recommended for expulsion due to “threats of violence.”

But, the suit argues, the student “made no threats to anyone.” It also states the student has “no prior significant disciplinary history and maintains an above average grade point average.”

“His writings, none of which were meant to be seen by anyone at the school, were commentary on the recent national trend of school shootings. The writing which triggered the alarm was written in the third person, using literary techniques that (the student) had been taught in his honors English class,” the suit reads. “The school administrators, reacting in the context of the latest national school shooting, overreacted to the writing and chose to expel (the student) to eliminate any perceived risk, no matter how insignificant it was.”

The investigation of the student’s writings began just two days after the Marjory Stoneman Douglas High School shooting in Parkland, Florida, when a former student brought a semi-automatic rifle to the school and opened fire, killing 17 people and injuring 14. Less than a month before that was the Marshall County High School shooting here in Kentucky, when a 15-year-old student killed two and injured 18 people.

According to the suit, the school board “ignore(d)” the opinion of a “mental health professional” when it decided to expel the student.

“Boyle County Schools could have helped (the student) correct any perceived inappropriate behavior with intervention and prevention services, but instead resorted to expulsion,” the suit alleges. “The school district cannot meet its burden of showing that it used the narrowest means available to achieve its interests.”

It also alleges Kentucky’s expulsion law — Kentucky Revised Statute 158.150 — “is unconstitutional on its face because it confers overly broad authority to local school boards to expel students.” It asks for the state law to be declared unconstitutional.

Collins, the board’s attorney in the case, said the law has withstood previous challenges.

“We have not gotten to a point yet where we have explored that (part of the lawsuit),” she said. “I know in the past, courts have upheld that expulsion statute because it gives students full due process.”

The suit asks for an order to re-enroll the student in school, and a temporary injunction allowing the student to re-enroll in school while the lawsuit is pending. It also asks for “sealing and expungement of all discipline records” related to the case, “compensatory educational services to place (the student) in the same position he would have been if not for illegal exclusion from school services,” attorney’s fees and any other justifiable relief.

The suit was filed by Danville attorney Bill Noelker. Collins said the school board will likely file its answer next week.