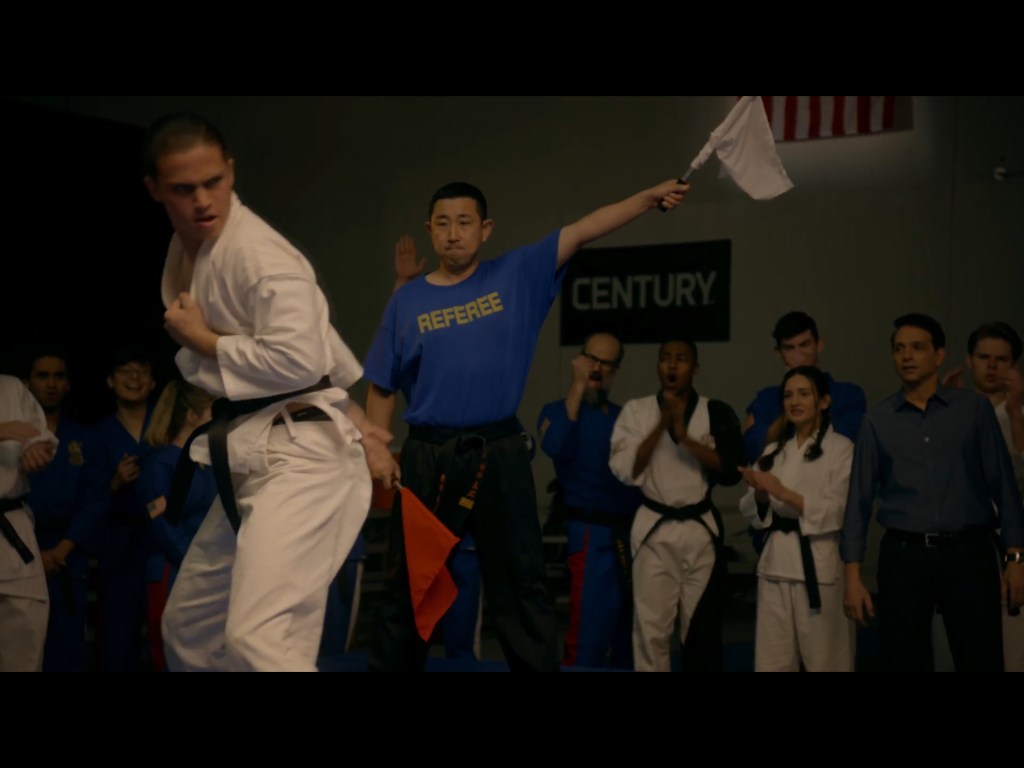 (Photo contributed) A scene from “Cobra Kai” where Harrodsburg karate teacher Shinji Matsuda is shown as portraying a referee in the tournament scene. Actor Ralph Macchio, who starred in the original “Karate Kid” movie, is seen far right. The series, which can be found on YouTube Red, takes off 34 years later after the first “The Karate Kid.”

Shinji Matsuda got his black belt at 14, and has been wearing it for over 30 years. Now, as a fourth-degree black belt, Matsuda will be joining the staff at the YMCA/Mercer Area Family & Wellness in Harrodsburg as an instructor. He also participated in work on a series that starts where “The Karate Kid” movieleft off, a 10-episode deal for YouTube Red that debuted this moth.

“I am very happy where I am in life, and to be lucky enough to have a location where I can teach karate to the kids, which is what I love to do,” said Matsuda.

But it wasn’t always that easy.

Matsuda moved to the United States 27 years ago from Japan; he opened his first studio in Danville in March of 1999. After moving here, he says he made it his personal mission to spread the teachings of karate in any way he can

Since the opening of his first studio, he’s moved around some — first to Burgin, then on to Harrodsburg Men’s Fitness, and then eventually teaching karate in the basement of his home.

But now, he’s got a new location to teach in — something he’s very happy about.

Although a fourth-degree black belt, Matsuda says he doesn’t “really care about the rank. I just love to teach, and to me, rank does not mean anything.”

However, teaching is not why he came to the U.S.

“The reason I came to the U.S. was because of my karate instructor, Hiroyuki Koda. I wanted to be like him and learn from him,” said Matsuda. Matsuda had dreamed of learning from Japanese-born grandmaster Koda, but he was located here and Matsuda was in Japan. So Matsuda relocated.

Koda passed away in 1997, but is survived by his son, Hiro Koda, who is a professional stuntman in Hollywood California. Hiro Koda has been nominated for four Emmys and has won one for outstanding stunt coordination for his work on “Supah Ninjas.” Hiro Koda is also well-known for his role as the blue power ranger in the original Power Rangers movie.

That’s how Matsuda came to work on the remake of “The Karate Kid,” something he worked on with Hiro Koda for YouTube Red. The 10-episode series is titled “Cobra Kai” and debuted on May 2.

Throughout production, Matsuda offered advice on the karate scenes in the film.

“He (Hiro Koda) wanted to make it professional looking,” stated Matsuda. Additionally, Matsuda acted in the final episode in the tournament scene.

Regarding his role, Matsuda said, “It was a very good experience and it was good publicity for my organization. It was an honor that he asked me to be in it.”

He also wanted to note important people in the episode as well.

“Our director of U.S. Yoshukai Karate, David Koda, who is the older son of my grandmaster (Hiroyuki Koda), was in this episode as well. Also, one of our grandmaster’s granddaughters, Hannah Pittman, was a stunt double. I hope my grandmaster is proud of all of us.” 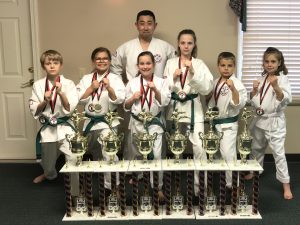 (Contributed photo)
Shinji Matsuda stands proudly behind his six students who placed in the Karate tournament in Somerset in April of this year. Although he’s a fourth-degree black belt, Matsuda says degrees aren’t important to him; teaching is what fulfills him the most.

He said the new Karate Kid is a comedic action series; it does not represent his own teaching style.

He currently teaches children as young as 5 years old but will teach any age, and does not currently have an adult class. He has 10 students, six of which traveled to Somerset to compete in a karate competition in April. All six placed.

“Our karate style is called U.S. Yoshukai Karate and this show used our style and wore our actual uniform, so it was an honor that our style was used in this show. There are thousands of styles of martial arts out there, so it was very special to our organization,” said Matsuda.

When he is not pursuing his passion for karate, Matsuda works at Denyo in Danville.

“An average day is hectic. I am in charge of anything we buy at Denyo, whether it is overseas or domestic. I also talk to customers to track demand and meet their needs,” he said.

This November will make 20 years that he has worked at the company, and he attributes his staying power to his dedication and the people who work there.