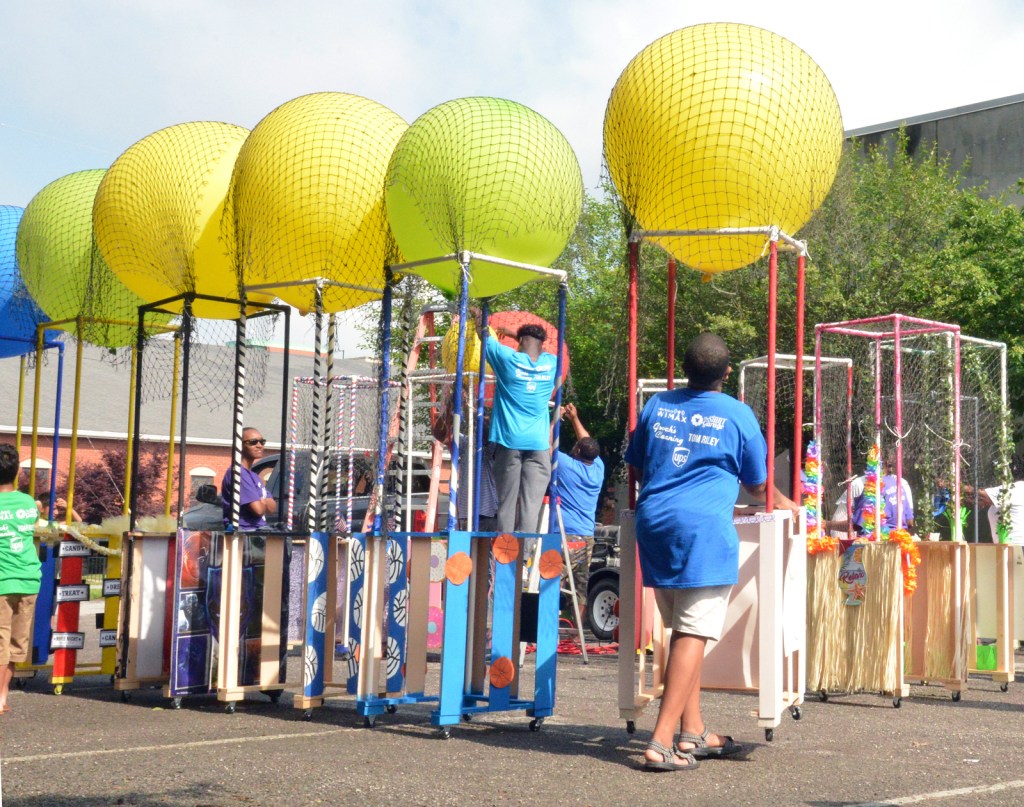 Balloons and baskets line up before going out into the street for the parade. Ernest Gooch came up with the idea to have a bunch of mini floats resembling hot air balloons in the parade. (Photo by Robin Hart) 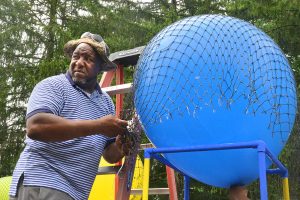 Ernest Gooch works on a balloon prior to the start of the parade. (Photo by Robin Hart)

Ernest Gooch, a large man with a big kid’s heart, came up with the novel idea. Ernest (Ernie to his friends) said he wanted to have a parade entry that included as many kids as possible and he thought hot air balloons would be fun to try.

Ernest doesn’t take all the credit though. His friend and former school teacher, Tom Riley said, “He came up with the idea and I came up with the design.” Tom said he designed the baskets and frame for the balloons with plywood and PVC pipes.

Ernest said others who were a huge help to coordinate the project included DeCarla Bell, Ann Richardson and Tiffany Turner.

Ernest had at least 20 kids and even more of their helpers work on the project, which took about three and a half weeks to complete. 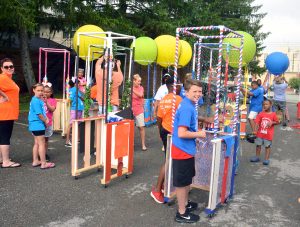 Kids wait to have the balloons added to their baskets. (Photo by Robin Hart)

After he built each balloon “float” in his workshop, the kids came after school and painted and decorated their baskets. “We had a good time. That’s all that matters.”

He said the kids came up with their own ideas and themes, like Dumbo, Minions, Danville Admirals, donuts, a movie theater ticket booth, baseball, basketball and a tiki hut.

Ernest said he loved seeing everyone working together. “We have nieces, nephews, parents and grandparents,” all working together, he said. “I’m really excited. What matters is the kids are having fun.”

An hour before the parade was to begin, the parking lot behind Second Street Christian Church was roaring with nervous last minute activity. Noisy generators were being used to blow up 20, 4-foot tall, bright blue, yellow and green balloons (the red ones didn’t work out very well, Ernest said).

Children were twirling, dancing, running and laughing as they waited for the grown-ups to put finishing touches on their “hot air” balloons. 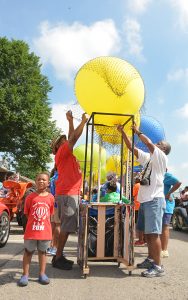 Ernest Gooch and Tom Riley adjust the netting over a ballon that was about to float away right before the parade began. (Photo by Robin Hart)

Grown-ups climbed tall ladders to adjust netting, secured balloons, taped on more decorations and worked frantically to get all of the balloons inflated on time.

Ernest was intensely focused on making sure everything was going according to his plan and everyone had a job to do. He climbed up and down ladders and ran back and forth from his box truck to get whatever was needed, like an extra ladder, more balloons — sometimes they popped — more netting and scissors.

Just as the last balloon was ready and all of the children and workers ran to their places on Second Street, ready to show off their balloons in the parade, one of the balloons wilted. Another almost came out of the netting. So Gooch and Riley, with the help of a few others, quickly solved the problems.

Then the last little boy — in his cowboy balloon and basket with a “Wanted” poster — crashed to the ground, face first. No one was injured and the balloon didn’t pop. But, more tape was needed to repair a little damage.

Finally, it was almost time to float down Main Street. It was Tru Gooch’s 13th birthday (Ernest’s granddaughter) and everyone in the balloons sang “Happy Birthday” to her as she grinned because of the attention.

Then, another balloon almost got away. Tom said, “As you can see, when they fall apart, you fix ‘em!”

Antique cars and an old fire engine were running beside the group as they waited their turn and the gas fumes were strong. Kids were hot and grown-ups were sweating, but when the group’s dance music was turned up loud, everyone seemed to forget about the heat — especially when Gooch started clapping and dancing. He was getting everyone hyped up to enjoy being in the parade.

His wife Terry was standing with a child in one of the balloon baskets as her husband danced by. She said her husband sometimes gets crazy ideas, but he always finds a way to make them work.

Terry said the large parade project is “awesome — all of this togetherness.”

She said it was fun for the kids “and I’ve had a wonderful time. Just look at the smiles on their faces.”

But no smile was bigger and brighter than Ernest’s.

The floats participate in Saturday’s parade. (Photo by Robin Hart)