ATVs disrupting life on the Fork 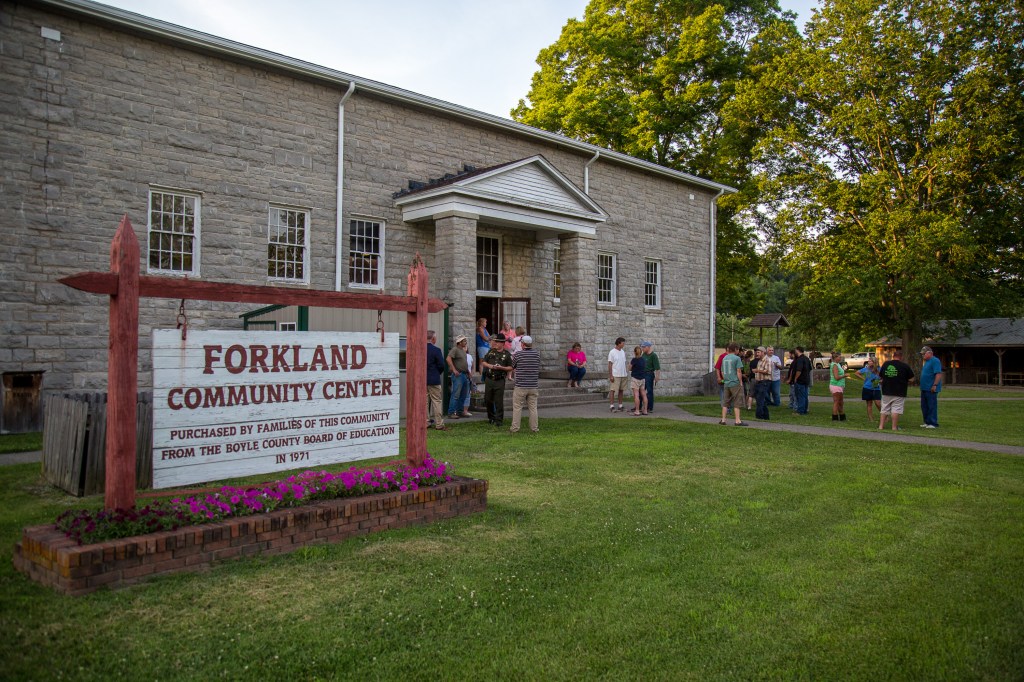 People congregate outside the Forkland Community Center Thursday night, following a community meeting to discuss property owners' rights when it comes to ATVs trespassing on their land. (Photo by Ben Kleppinger)

Deep in the woods of southern Boyle County, there’s a scenic picnic spot along North Rolling Fork Creek where people have come for decades to enjoy the beauty of “the Fork.”

The property has been in Alan Ellis’ family for three generations. “It’s always been in my family. And we keep it up in honor of my mother and dad,” said Ellis, 72.

Col. Eric Gibson with Kentucky Fish and Wildlife said Ellis has always allowed kids to visit the flat-rocked picnic area and wade in the creek; he lets families visit; and high-school seniors even come on occasion to take senior pictures.

“He’s always shared his property with people that are respectful to him of his property and we’ve all known that,” Gibson said. “I’ve seen people there for 20 years or more.”

But Ellis is one of dozens of landowners in the Forkland area who say they’re dealing with a growing number of disrespectful visitors on the Fork, who ride roughshod up and down the creek, over private property and create problems.

“I run a guy out of the picnic area down there this year,” Ellis said. “He had three kids with him — small kids. He was on a four-wheeler in the creek; they were up in the picnic area, doing donuts. I got pretty rough on him. And he apologized, and I said, ‘You know, what I’m sorry about is that you’re not teaching those kids respect for private property.'”

While the four-wheeler problem has persisted on the Fork for years — residents said they attempted to get it under control two sheriffs ago, as well — it’s been getting especially bad in the last three years, said Matthew Ellis, president of the Forkland Community Center.

“When I confront people that are in the creek, the first thing they say is, ‘Well, this is public property,'” he said.

The problem has gotten bad enough that on Thursday night, more than 100 people gathered at the community center for a community meeting, to hear from elected officials, law enforcement and local leaders on how they can put a stop to it. 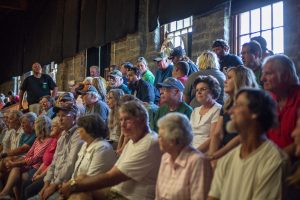 Attendees line the bleachers inside the Forkland Community Center during the meeting. (Photo by Ben Kleppinger)

Matthew Ellis moderated the discussion, and he was direct about one obstacle he saw to solving the problem.

“I think one of our biggest Achilles’ heels on the Fork — we like to be left alone,” he said. “We feel like this is kind of our area, but there’s times and things we can’t solve on our own.”

The sheriff has commented previously that when he gets a call from the Fork, he knows it must be serious because people in the area don’t tend to call law enforcement to solve their problems, he said.

Sgt. Chris Stratton, chief deputy for the Boyle County Sheriff’s Office, said it’s a problem that “everybody thinks the creek is a community area” but “it’s not a state park.”

“You all have been gracious enough throughout the years to let families come down and you haven’t said anything,” Stratton said. “And that’s kind of spiraled more and more, ’til now, you’ve got people in the creek at 3 in the morning, all over, all up and down the Fork, drunk, doing drugs, needles — there’s all kinds of stuff. We know that. It’s just spiraled out of control — that’s why we’re here tonight. We want to help you all clean this up; we really do. But we need your help doing it.”

Local landowner and attorney Mark Morgan and Boyle County Attorney Lynne Dean attended the meeting and debunked a common argument landowners said they hear from people riding vehicles in the creek — that no one owns the land where the creek flows.

“There is a misperception that the creek is public property and that is not necessarily true. The landowner owns the creek bed and the land surrounding the creek. The water that flows through — no one owns that; that’s public property,” Dean explained. “So if you’re in a canoe or a kayak going down the creek, that’s one thing, because you’re just on the water. But when something makes contact with the creek bed, like a vehicle, a truck or an ATV, then that is a trespass unless you have permission to be there.” 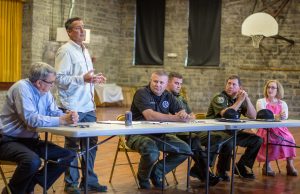 Morgan acknowledged there are people who ride ATVs with permission from landowners. In those cases, written permission is extremely useful.

“Having written permission from the landowner that you’re on is going to make it easier for (law enforcement officers) to do their job and not have to start some action against you that you don’t deserve,” Morgan said. “Similarly, if you don’t have permission, then don’t trespass on other people’s land because you wouldn’t want them trespassing on your land. That’s as basic to America as it gets.”

Stratton agreed that written permission is best and suggested landowners list their tract number on any written permission they give, making it even easier for law enforcement to verify when they get called to the Fork for a report of trespassing.

“There’s not law that says you have to have written permission,” he said. “But if all the landowners band together and have a gentlemen’s and ladies’ agreement and say, ‘You know, if somebody is on my property and they don’t have written permission from me, I want them gone’ — that would make our job so much easier.”

One man in the audience suggested the sheriff’s office ought to patrol the Fork on Saturday and Sunday afternoons, when people are most likely to be out on ATVs and side-by-sides. The sheriff’s office could “hit their pocketbooks” by charging them with trespassing (Dean said criminal trespassing can result in a fine of up to $250).

“I love your idea — I really do,” Stratton said. “Plus, I love coming down here; it’s beautiful.”

As the meeting progressed, one woman said leaders “do not have a clue how dangerous it is getting.” She had “20 or 30” vehicles come along the creek on her property one day recently and she felt threatened when she confronted them.

“I was cursed. I was told to get back in my house, not to sit on my porch,” she said.

Rowdy people in the creek is getting to be more and more common, she said.

“There’s a waterfall right below our house. They are tearing it down where they are traveling up and down with these four-wheelers and stuff. There will not be a waterfall shortly,” she said. “… It is a dangerous situation when people are drunk and on drugs and are on that creek and I’m in my yard and they’re threatening me.”

Dean encouraged the woman to bring her photos she took of a license plate and she would help prosecute the people who trespassed on her property.

“Then they’ll come to burn my house down the next day,” the woman responded. “You don’t understand what we’re dealing with. We are dealing with gangs.”

“When was the last time a house was burned here out of retaliation?” Stratton asked the audience. “Can anybody name a time?”

Members of the audience pushed back — one of them asked why they needed to wait for such a thing to happen.

“As police, here’s our conundrum,” Stratton said. “You all want our help, but you don’t call us. And then, when we ask, ‘Why won’t you call us?’ you say, ‘because they’ll burn our house. And I say, ‘When’s the last time anybody burned your house?’ And you start back — it’s just a circle. … In order for us to do anything, you have to call us and let us know what’s happening.”

“I think the theme for tonight is, ‘use your own property, but respect other people’s private property rights, too — including the stream beds,'” Morgan said.

Anyone in the Forkland area who wants to report something to law enforcement has multiple options, given the area’s location on the boundary between Kentucky State Police’s Post 7 and Post 15 regions, according to Col. Eric Gibson with Fish and Wildlife.

Fish and Wildlife officers can also be dispatched if they are in the area when a KSP post is called, Gibson said.

“It’s actually a good thing, because you could have either post closer,” he said. “… If we’re in the area working, we don’t mind a bit to also respond.”