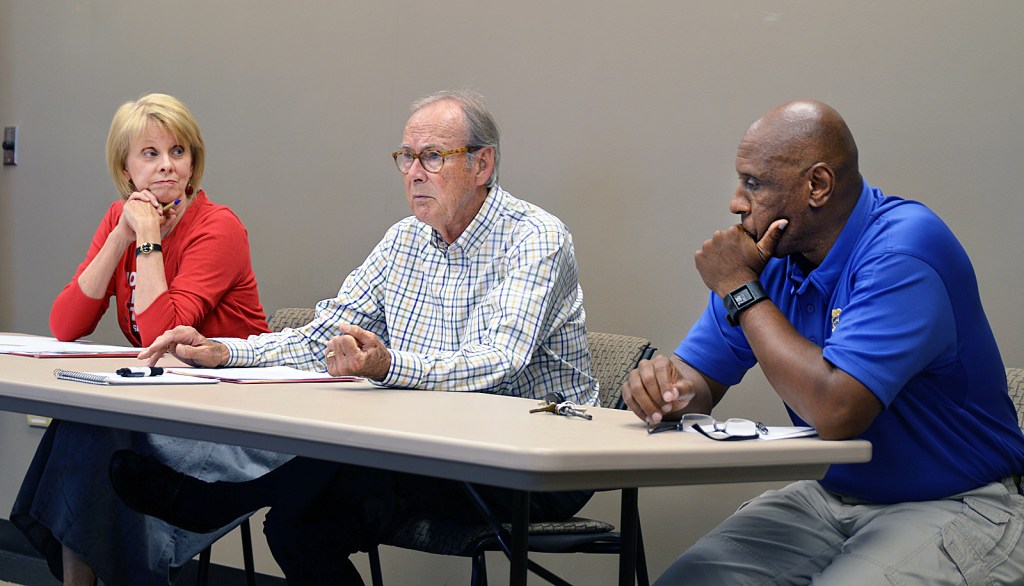 “There has never been a child shot behind a locked door,” Danville Police Chief Tony Gray announced to those in the audience Tuesday night at the Inter County Energy Community Room.

The panel and open discussion, titled “Responding to Gun Violence,” tackled many topics.

Tarter opened the discussion with a rundown of the facts. “It’s not hard to see that guns have made an impact on our schools, on our health systems, on our government, on all facets of our community,” Tarter stated.

A reoccuring theme was the increasing suicide rate. Tarter noted in the U.S., on average, there was a 25-percent increase in the number of deaths by suicide from 1999 to 2016. This number is significantly lower than Kentucky’s 37-percent increase over the past 17 years.

“What we’ve found in our research is that this problem is occurring in the older population in small rural communities — and that’s us,” Tarter said. “This is a matter of grave concern.”

The accessibility of guns was also addressed. Chicago has the highest rate of homicide in the country, but they have the strongest regulations on gun control.

“What they don’t tell you is that once you cross the city limits of the city of Chicago, the rest of the state does not have strict gun regulations,” Tarter said.

He said people will find a way to get guns. This relates directly to Kentucky because Kentucky is the 11th highest exporter of guns used in crimes. Tarter said the manufacturing of guns and lack of regulation in Kentucky is a national problem because guns made within the state can be used elsewhere to commit crimes — for example, homicides in Chicago.

“To summarize, the problem is multifaceted and it requires the involvement of all in the community and relies on facts, not myths, and research-based intervention that has been proven to make a difference and that it is sustained from generation to generation,” Tarter said.

“I’m a proponent of the second amendment,” Gray began. “I think our forefathers wrote that document over 200 years ago and it is important.”

Gray spoke about the misconception that police officers are gun fanatics. He turned to the audience at this point and asked, “What is your perception of guns in our community?”

The general consensus, as tallied by Gray is most in attendance believe guns are not currently a problem in Danville, but they have the potential to become a problem.

He then asked about how often the audience believed Danville police officers encounter guns. Based on the responses, Gray said a majority of those in attendance believe that guns are more of a serious problem than they actually are.

Gray estimated that the Danville officers encounter guns four or five days of the week, but the key is that they don’t pose a threat. He said that a normal encounter would consist of an officer pulling someone over for a traffic violation and the person having a gun located somewhere in their vehicle.

This transitioned into a story Gray told regarding changing times.

“I can remember when I was in high school — and I’m sure some of you all can remember there wasn’t that many vehicles, but in almost every truck there was a gun rack,” Gray said. “And probably, the windows were rolled down too if it was hot outside.”

This earned the nods of many in attendance.

“It caused no alarm or anything like that, but times have changed,” Gray said.

He added that guns were formerly used for securing food and providing security from animals, whereas today they are used for protection from individuals. Gray also explained the recent popularity of handguns and problems surrounding the AR-15.

“What guns meant and were used for has transitioned, and the laws haven’t kept up. This explains how we’ve found ourselves in this conundrum,” Gray said.

Gray said Danville’s biggest problem with guns is their correlation with drug usage.

“Kentucky is slow sometimes,” Gray said. “But things are changing.”

He said that under a new order, police must seize all weapons of those involved in a domestic abuse case. Gray also noted that a change in Kentucky policy allows restraining orders to be placed on boyfriends or girlfriends, not just those who are married, a change that will hopefully prevent a small portion of gun-related incidents.

“At length, I think an area Kentucky lacks in regarding gun control is mental health,” Gray said. “There’s nothing right now that allows us to check if one is seeking therapy or if someone has been institutionalized. There’s nothing to prevent people who are potentially dangerous from obtaining a weapon.”

Sugarman brought up an issue many in the audience had raised — guns in the  schools systems. Sugarman served as a spokesperson for the Lexington chapter of Moms Demand Action for Gun Sense in America Tuesday night.

“Guns have been a problem for many years, but shootings in the schools have gotten people’s attention,” said Sugarman. “Marshall (County, Kentucky) in particular got people’s attention, and there are legislators in Kentucky that think we should let teachers have permits.”

Sugarman and Tarter listed the various problems with this idea.

For one, Sugarman said, a trained police officer is only effective 18 percent of the time in an active shooting situation. “The idea of giving the English teacher a gun and thinking they’re going to run out there and be the hero doesn’t make sense,” Sugarman said.

Chief Gray talked about how many police forces aren’t equipped with adequate weaponry to defeat an AR-15. “And you don’t want a teacher with an AR-15 either,” Gray said with a laugh.

Sugarman said another problem is that in a crisis situation, if a teacher is standing out in the hallway with a gun, it can be hard for police to distinguish who the bad guy is.

Following some brief discussion, Boyle County Chief Deputy Jailer Brian Wofford raised his voice. “I’ve been to a lot of these meetings, where we talk about gun control. I never hear anybody talk about what the cause is. I’m all for closing the loophole, and there are serious loopholes in our legislation, but it seems like every meeting I’ve been to we only address the symptoms. We need to start talking about what’s the cause.”

Gray said why it hasn’t been discussed is that the shooters seen on TV and in the media are from younger generations, generations that haven’t finished developing. He also stressed the difficulty with gaining an understanding of the perspectives of younger generations, particularly those who commit gun related violence, because such a large percentage of them commit suicide.

Until more is learned about those committing the crimes, Gray said preventative measures rooted in the cause of the shooting incidents will be difficult, especially with the involvement and domination of the federal government on larger gun related incidents. The involvement of the federal government in school shootings, mass shootings and gun-related incidents leaves little guidance for states and communities, he said.