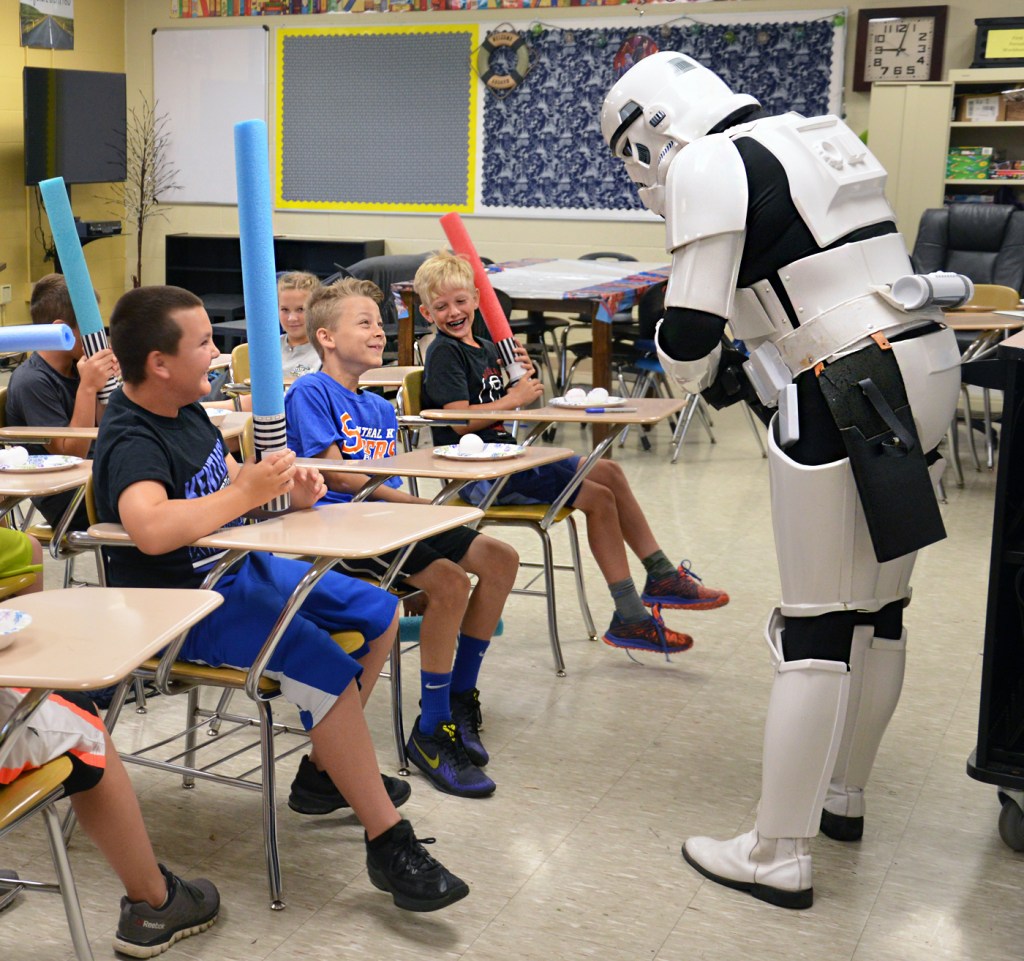 At the Black and Gold Academy Wednesday morning members of the Jedi Academy are greeted by an official Storm Trooper character. (Photo by Robin Hart)

The Boyle County School District opened its annual Black and Gold Academy on Monday. The week-long camp is free for students in kindergarten through eighth grade who are registered in county school system. More than 730 signed up for the camp and are taking a variety of classes that interest them.

There are about 70 classes offered, including “CodeMasters,” where students design video games using programs like Scratch and Bloxels; “YouTube Famous” which trains students to become a YouTube sensation while producing a vlog; “The Big Build” in which students help build the new middle school while spending time on the construction site with contractors; “Flea Market Flip,” where students repurpose flea market finds and turn scrap paper into creative creations with Mod Podge; “Scalpel Squad: Oceania,” where students investigate marine life, then dissect sharks and other sea creatures on dry land; “Drone Diversions,” where students earn wings while navigating the skies with the latest drone technology; and “Go-Kart Mechanic,” where students start from scratch and work together to build a fully functional go-kart.

Order prints of these photos from MyCapture here.

In the Slime Time class, Ella Wheeler, 8, stretches out a glob of magnetic slime that she and her partner, Emilee Vanoy, 9, had just created.

Landrey Hood applies fabric paint to a T-shirt she was designing for her doll.

During the American Girl Fashion class, Joanna Ty, left and Zoe Zimmerman, embellish a T-shirt for their American Girl Doll. The class helps young students design clothing and accessories for their dolls.

Not all time spent at the Black and Gold Academy is doing classroom activities. The morning session also lets students play games and enjoy big tricycles before getting down to some serious fun. On Wednesday morning, Keenan Stewart, leads Levi Wooten and Austin Milburn around in circles.

At the Black and Gold Academy Wednesday morning members of the Jedi Academy are greeted by an official Storm Trooper character. (Photo by Robin Hart)