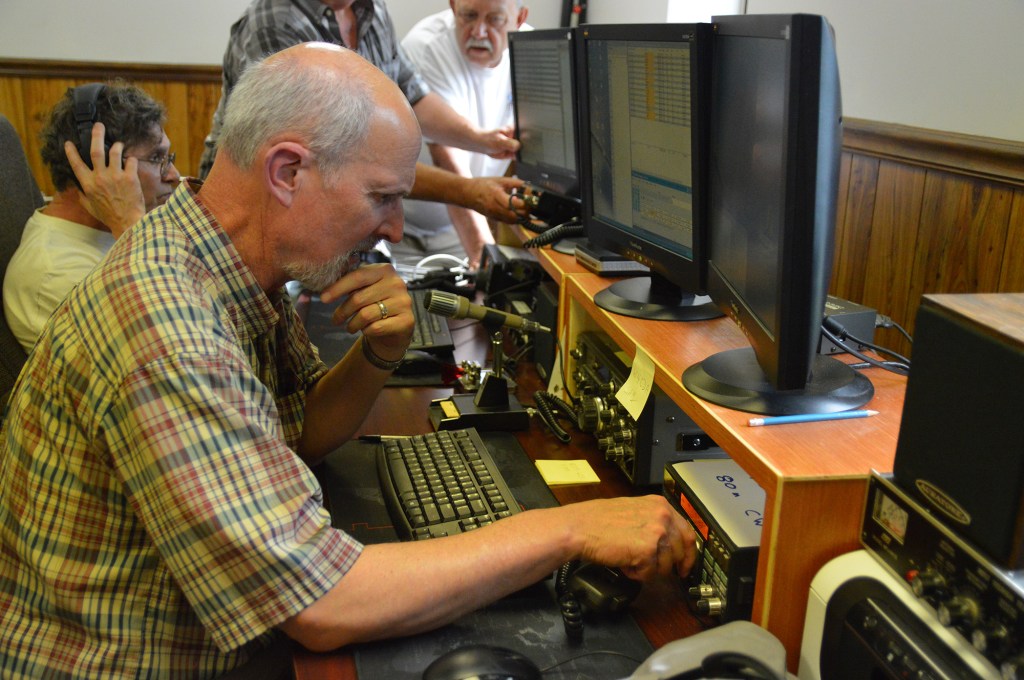 William Waldschmidt, a CW operator, adjusts a dial on a radio while participating in the ARRL Field Day competition. (Photo by Casey Craiger)

Ham radio, also known as amateur radio, has become a popular hobby nationwide and a service that brings people together. Through electronic communication, people can use ham radio to talk to people across the world and even in space, without using the internet, smartphones, or traditional power sources. 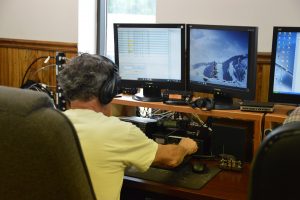 A CW operator adjusts his equipment while reviewing his log of interactions during the Field Day event at American Legion Post 46. (Photo by Casey Craiger)

The Wilderness Road Amateur Radio Club in Danville sees ham radio as a fun, social and education tool that can be a lifeline during times of need. The WRARC seized the opportunity to illustrate this by participating in the 24-hour long American Radio Relay League (ARRL) Field Day competition at the American Legion Post 46 in Danville.

The field day is an annual amateur radio exercise that allows amateur radio operators to display their emergency communication preparedness. The event replicates an emergency scenario, where ham radio operators across the nation set up their radios with only electricity that is produced from generators or solar power. In the U.S., this event is regularly the largest single emergency preparedness exercise in the country. Over 30,000 operators participate annually in the field day, which takes place the fourth weekend of June. 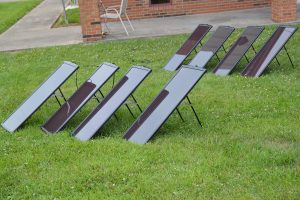 Eight solar panels line the grass area in front of the American Legion Post in order to power one of the antennas. (Photo by Casey Craiger)

The event has a competitive twist to it. Ham radio operators try to contact as many other ham radio stations as possible within a 24-hour time frame. After touching base with another station and exchanging details, the encounter is logged in a database, which is then shared with the ARRL for the purpose of analyzing the effectiveness of ham radio in an emergency situation, and for keeping score for the contest.

One of the many appeals of ham radio is the timeliness of set up and opportunity to set up in many locations. The WRARC was able to set up their antennas in the field surrounding the American Legion Post on Saturday two hours before the competition began at 2 p.m. Power for the entire operation was provided via eight solar panels and various generators. 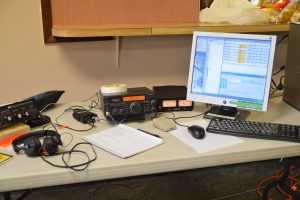 Although the amateur radio operators present at field day got involved for a variety of reasons, something they all share is a large knowledge of radio technology and operating principles.

All ham operators are required to pass an exam to obtain their Federal Communications Commission license. This license allows them to operate on specific radio frequencies known as “Amateur Bands.” These bands are allocated by the FCC for ham radio operators to use.

The field day has been held annually since 1937, and in the WRARC’s years of participation, they’ve had some interesting participants.

“One of the early newspaper folks that participated was Chauncey Alcock. Chauncey not only reported for The Advocate-Messenger, but he was a ham radio operator,” said Activities Director George Coomer. “W4CDA was actually his call sign, and that’s the one our club uses now.” 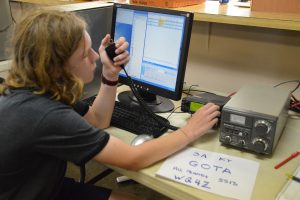 David Lamb utilizes the Get On The Air (GOTA) station to earn points for the WRARC. (Photo by Casey Craiger)

One of the elements of the field day Coomer was particularly excited about was the Get On The Air (or GOTA) station.

“That’s something really special to us because unlicensed people who want to see what ham radio is all about can sit down with a licensed ham operator and get on the air,” he said. “It’s been beneficial in getting young people interested.”

The ARRL encourages the involvement of young people, and provides many clubs such as the WRARC with comic books to pass out to kids. Examples of these comics include “Archie’s Ham Radio Adventure” and “Animaniacs’ Welcome To Emergency World.” They also include crosswords, storylines and fun facts to teach children how ham radios can be beneficial in emergency situations. 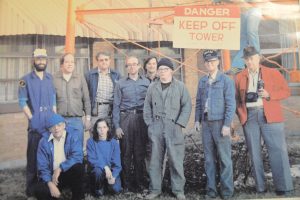 George Griebe (WQ4Z) was one of the many ham radio operators present at the local field day event. He noted the importance of practicing ham radio techniques in the event of emergency. “We don’t just talk into microphones. The information that is transmitted during a disaster situation such as the New Orleans flood mostly comes from ham radios, Griebe said. “You take the World Trade Center, for example — first thing that happened was everyone’s cell phones quit working.”

Griebe stated that they even have an unconventional backup plan in the event their solar panels and generators quit working. Traditional ham radios, such as the ones on-site at the American Legion Post this past weekend, run off of 12-volt batteries. In the unlikely event that their power sources give out during an emergency, Griebe said, people may choose to remove their car batteries to get their radio stations functioning again.

Secretary of the WRARC Chris Galbraith also spoke about the many functions of ham radios in disaster scenarios.

“The bad thing about natural disasters like (Hurricane) Katrina was that when FEMA intervened, their radios ran off of power supply,” he said. “When they started to run out of power, ham radios were able to keep communication going.”

Coomer said that perhaps the most common way the radios have been utilized is during wartime. Ham radios can transmit signals to planes and beyond.

“Also, during wartime, ham radios have been a way for soldiers overseas to get messages back home,” Coomer said.

The ability for long distance communication is one that can be utilized for fun as well, said ham operator Sharon Griebe (KE4INO).

Sharon Griebe was able to touch base with a Russian space station shortly after obtaining her license. 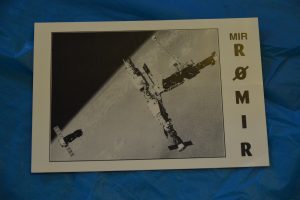 Sharon Griebe’s postcard that she received confirming her correspondence with the Russian space station.

“The space station makes a circle around the Earth every 90 minutes. You have to call when you hear them on the radio. They send out a beep alerting you that they are live,” she said. “It was long ago, I hadn’t had my license very long and I was so excited.”

She said that she and a ham radio operator in Harrodsburg both made contact and bonded over their shared passion. Griebe said she doesn’t remember the specifics of their conversation, but that they sent her a QSL card with their call sign on it. A QSL card is a written confirmation of a two-way radio communication taking place between two amateur radio operators. Griebe described it as a sort of postcard that detailed their interaction.

Throughout their conversations, ham radio operators were quickly filling logs with information they’d gathered from stations they connected with throughout the event. Coomer says he is thankful for the opportunity to have a place to conduct such an event. The American Legion Post 46 on Spears Lane recently gave the WRARC a permanent location to broadcast and hold monthly meetings.

Tony Cromwell (KB4TC) is the commander of the post where the field day was hosted, and where the WRARC has relocated.

“American Legion has a lot of different missions: supporting veterans, supporting this community. A lot of those missions are accomplished by the amateur radio process,” he said. “There is a long history of amateur radios serving our communities in terms of natural disaster. That’s what allowed me to bring this group on.” 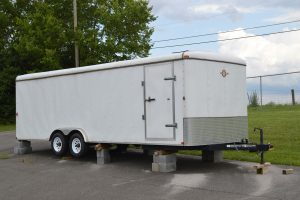 Through the collaboration of the American Legion and the WRARC, this trailer will transform into a mobile emergency communications center. (Photo by Casey Craiger)

As part of the WRARC’s partnership with the American Legion, a white trailer is currently being converted to a mobile emergency communications center.

“It’s designed to be a communications van as part of our agreement,” Cromwell said. “One of the ham operators is thoroughly ingrained in the emergency communications family throughout Kentucky and nationwide, so he knows how to set it up.”

Cromwell said once the American Legion in collaboration with the WRARC gets the trailer fully up to speed and equipped, ham operators will be able to respond in the event of a natural disaster or other emergency in the Boyle County area.