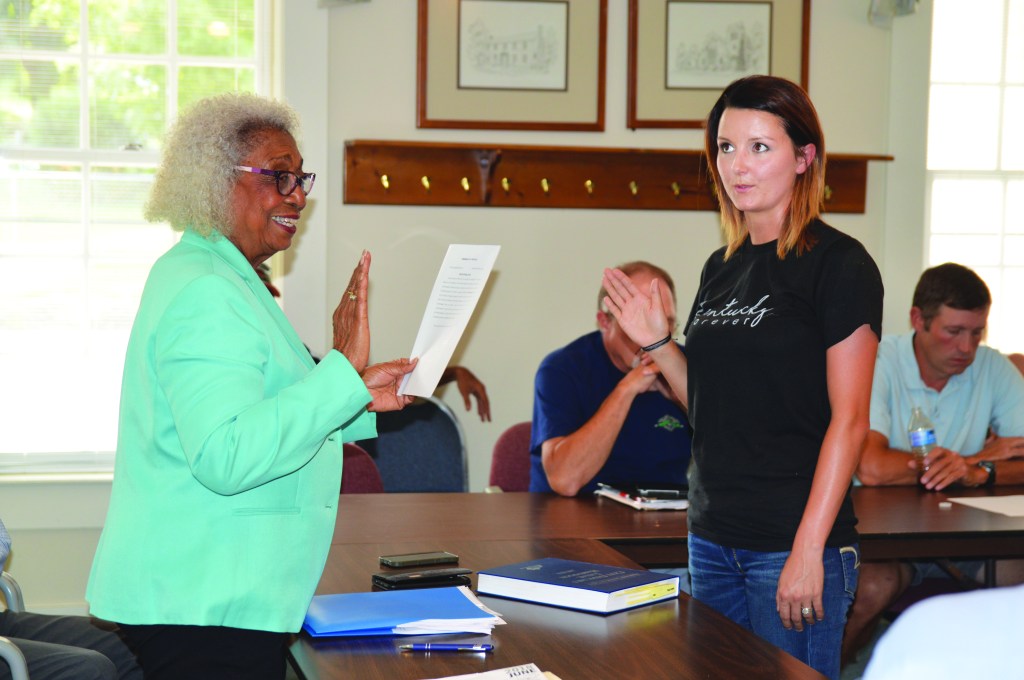 Bobbie Curd/bcurd@amnews.com Perryville Mayor Anne Sleet, left, asks Amber Noakes if she's ever taken part in a duel or assisted anyone in a duel as part of being sworn in as the new city council member. Noakes replaces Jerry Houck, who resigned earlier this month.

A new face will begin appearing at the table for Perryville City Council meetings starting in July: Amber Noakes was sworn in Thursday night during a special meeting, after a 3-2 vote to appoint her. She will fill the empty council seat left by Jerry Houck, who resigned early this month.

The council briefly discussed its options for the process of the appointment Thursday before going into executive session to discuss the five candidates who came forward for the seat — in addition to Noakes, Kelly Gray, Danielle Pruitt, Ryan Novell and Tim Simpson had also put their names in to be considered for the opening.

City Attorney Winfield Frankel told the council it most likely needed to create an ordinance specifying how vacancies would be handled in the future. Frankel said there’s no real clear answer on how it is to be handled, since the state largely seems to defer to the city’s relevant ordinances. Perryville’s ordinance, he said, mirror’s the state’s and don’t clearly define how to fill vacancies, either.

“The council can choose on what they want the threshold to be,” Frankel said, explaining it can decide on things like if new appointments require a unanimous vote, or if a vacancy should be filled by whoever was the next-highest vote-getter in the most recent city council election.

“Next meeting, we need to have some kind of ordinance on the books pertaining to vacancies,” council member Brian Caldwell said.

Caldwell added that he personally feels the best way to fill vacancies would be going to the candidate who received the next highest votes.

“And it would help the mayor from trying to find someone,” council member Julie Clay said. “Although we have a great deal of interest this time …”

After the executive session, Clay made the motion to appoint Noakes, who was in the audience, as the next council member. Clay, Caldwell and Paul Webb voted in favor; Joanne Reynolds and Steve Bailey voted against it.

“We appreciate your interest in the vacancy — I know you’ll be a great asset to the city,” Sleet said.

Noakes will take her seat during the next regular meeting, which was rescheduled to July 12. The meeting had been scheduled for July 5, the day after Independence Day, but a few planned to be out of town.

“I’m originally from Perryville, and I absolutely just love our little town,” Noakes said later by phone. In August, she will have served on the Main Street Perryville Board for two years. She and her husband, Chase — who is originally from Lincoln County — recently launched a new business, Perryville Party Rentals.

As far as what Noakes is looking forward to sinking her teeth into on the council, she said there wasn’t really any one issue that persuaded her to serve.

“I just love our community. I always give 110 percent in everything I do, and I felt like I would be a good fit.”

Noakes said she’s had a few jokes and prods asking if she “really knew what she was getting into,” but she doesn’t take any of that seriously.

“I haven’t seen anything that would steer me away. I just want the best for Perryville, and I hope we can all come together and do just that.”

The next regular Perryville City Council meeting has been rescheduled to 7 p.m. Thursday, July 12 at the Perryville Community Center, 236 S. Buell St.