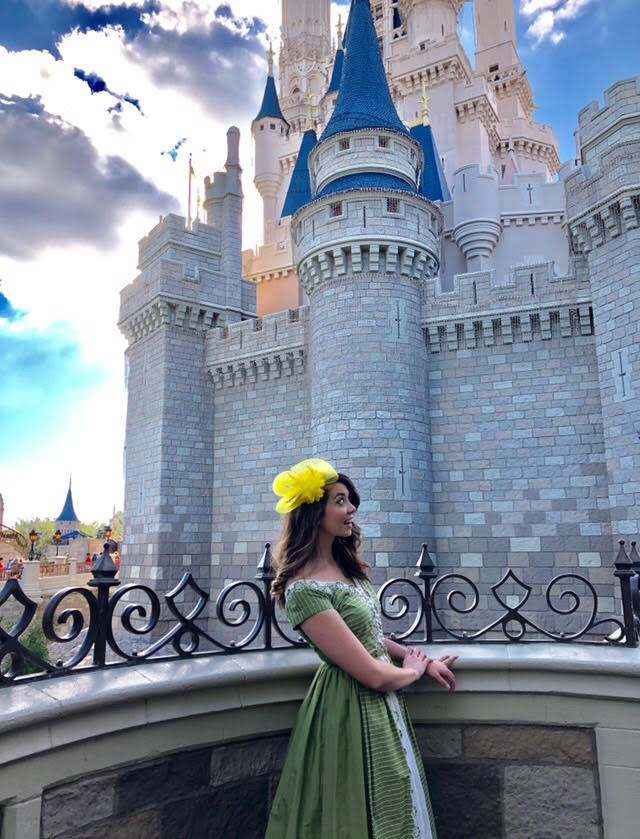 Photo contributed Marlowe poses in front of the castle at Disney’s Magic Kingdom, while taking part in the Disney College program.

Sarabeth Marlowe enjoyed her time as a participant in the Disney College Program so much, she’s created a vlog about her experiences there — and so far, she has over 400,000 views.

“Slightly Sarabeth,” the name of her YouTube vlog, was started by the Danville native to document her experiences at Disney World. After the “pretty intense application process” to get into the program and prior to her arrival in Orlando, Marlowe was inspired by “YouTubers” who had documented their participation in DCP (Disney College Program) and decided to start her own channel.

Apparently others agree. Her channel just began on June 21, and she already has more than 6,000 subscribers.

Life in the DCP

“I wanted to give a real life depiction of what it looked like to be in the DC,” Marlowe said.

She said although her channel started as a way to document her Disney experience, she fell in love with the idea of creating memories on film and being able to watch and enjoy them with people she loves. She has no plans of stopping her channel.

“It’s been so fun for me to continue blogging back in Danville,” said Marlowe. Vlogging has given her an opportunity to “catch some really amazing life moments on camera,” she said, noting how she documented of her engagement to Jack Graham, a Danville native who appears in several of her vlogs.

“Pictures are great, but video has a way of really putting you back in a location or a moment and getting to experience all over again and I’m grateful that I’ve been able to capture so many sweet moments on camera.” 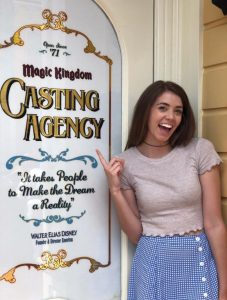 Photo contributed
Marlowe points to the sign marking Magic Kingdom’s Casting Agency which features a quote from Walt Disney, “It takes people to make the dream a reality.”

Marlowe said one of her favorite parts of working at Disney World was free admission to all of the parks.

“It made Disney World seem like a casual thing that I could really enjoy rather than rushing through it because I wasn’t only there for a few days on a vacation,” she said.

Marlowe, who’s back in Danville for at least a year as she participates in a non-profit fellowship at the Community Arts Center, is a student at Georgetown College. She said getting into DCP started with an online application and web-based interview.

Marlowe said the interview is essentially a personality test, and once completed, requires approval. If the web-based interview is approved, the applicant is given the opportunity to have a phone interview. Marlowe recalled being asked about how she would function if selected for the program.

“Then the waiting game begins. Some people wait months to hear back about their acceptance,” she said. “I luckily only had to wait two weeks.”

Marlowe was accepted into the food and beverage department, and while it wasn’t her top pick, she said she was just happy to be going. She was placed in the Plaza Ice Cream Parlor on Main Street U.S.A in Magic Kingdom.

“It was the best. It was a dream to work on Main Street and get to see the fireworks above and all the parades everyday,” she said.

The Walt Disney Company runs their parks on the idea of the whole experience being a show. Thus, all the employees are called cast members, and all rides are called attractions.

“The areas that a cast member interacts with guests are referred to as onstage, and areas that guests aren’t allowed to go are called backstage,” said Marlowe. “They have certain dress codes and standards that set the difference between ‘good show’ and ‘bad show.’ The whole operation is very theatrical and I love that about Disney.”

On her off days or before work, Marlowe says she maximized the free-park-admission perk of the job, allowing her more time to experience the magical world.

Participants in the Disney College program do not get preference of when they want to work, and typically receive nighttime shifts — her least favorite part of her experience.

“A very normal shift for me to work was 8 p.m. to 2 a.m., but sometimes I would work 2 p.m. to 1 a.m.,” she said. “There were really long or really late shifts, and while it was fun because I was working with a bunch of other college program students, it definitely did begin to wear me down.” 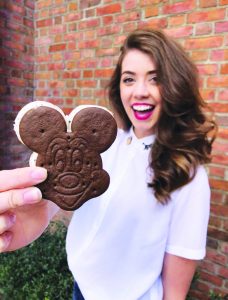 Because Marlowe worked night shifts, a normal day started for her at noon. Her free time was either spent visiting Disney’s parks with friends or watching movies until she had to start getting ready for work.

“At work, I scooped ice cream, worked the cash register, made waffles, a variety of things. I would sing to the fireworks show and interact with guests and try to make the most magical experience for them possible,” she explained.

Marlowe’s day ended by 1 or 2 a.m., depending on the season, and then she’d make the one hour commute home.

Although she has the videos to look back on, Marlowe said she does have something in particular she will miss.

“I think what I miss more than anything is living with my roommates. There were six of us all together. We all became very close and spent so much time together playing in the parks, laughing at each other and having movie marathons,” she said.

Marlowe said that because of the intensity of the program and the realization it was a dream of many of the participants for a very long time, sharing the experience with others was special to her.

“And now, we are all over the country again. Some finishing school, some starting real jobs and some who stayed to go full-time as a Disney cast member. I miss going to the parks and watching the fireworks every night, but I miss my roomates more than anything else,” she said.

Marlowe also said she would miss learning about the behind the scenes of the Disney parks. She said a lot of people believe the tunnels running underneath Magic Kingdom are a rumor, but they really do exist.

“There is a whole tunnel system underneath Magic Kingdom which enables cast members to get around without being seen by guests. It is ‘bad show’ to be seen wearing a backpack to go on break or have the costume of Tomorrowland on while you’re in Fantasyland. It takes the guest out of the world of whichever land they are in, so Magic Kingdom was built on top of tunnels so it wouldn’t have to be an issue,” she recalled.

“Due to Florida’s swampy nature, they couldn’t dig underground. It’s hard to tell, but when you walk into Magic Kingdom, you’re actually going up an incline, but it’s very subtle,” she said.

Guests don’t have access to the tunnels unless they purchase tickets to a specific tour, thus access and knowledge of them is limited.

“It was a dream for me to get to walk in them every day to go to work,” Marlowe said.” I loved every second of it.”