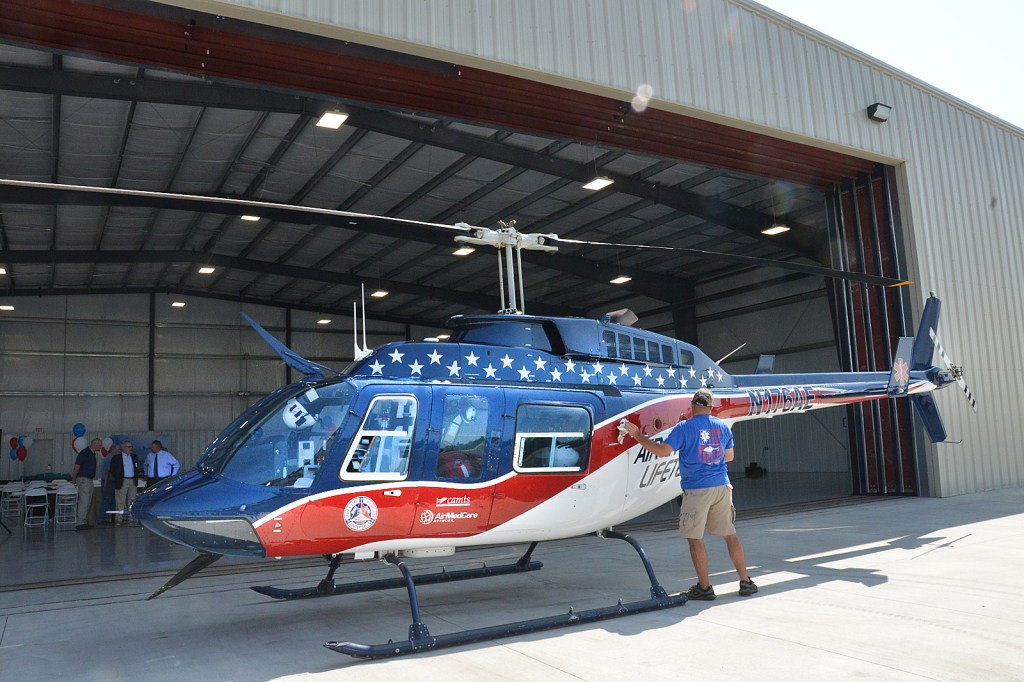 Photo by Robin Hart/robin.hart@amnews.com A helicopter owned by Air Evac, station in Boyle County was the center of attention during the company's 10th anniversary open house on Thursday at Stuart Powel Airfield.

Air Evac Lifeteam 56 celebrated 10 years of being in the Boyle County community with an open house on Thursday at the Danville-Boyle County Airport in Junction City.

According to its website, Air Evac is an air ambulance company originally established in 1985 in Missouri to serve those living in rural areas who are usually far from major hospitals. 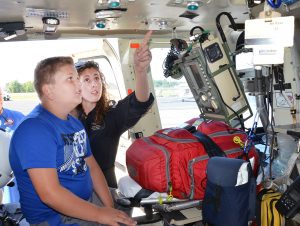 Photo by Robin Hart/robin.hart@amnews.com
Regina Martin, a nurse with Air Evac stationed at the Stuart Powel Airport in Junction City, shows her younger brother, Conrad Martin, both of Liberty, the equipment inside a helicoppter that is similar to the one she works in. Air Evac held an open house in honor of its 10th anniversary of being located in Boyle County.

During the local open house, Donald Hare, program director for Air Evac, welcomed the crowd and said the company began local operations on July 7, 2008. It is also now a regional hub for Air Evac helicopter maintenance for five states — Kentucky, Illinois, Indiana, West Virginia and Ohio — and has 35 employees. He said more than 3,500 flights have taken off from the airport out of about 5,700 total flight requests.

The Danville-based Air Evac can reach emergency situations in a 70-mile radius.

Hare also presented three special plaques of appreciation to those who had been instrumental in helping the air ambulance company locate here 10 years ago and who continue to support them. They were: Harry Nickens, former president of Ephraim McDowell Health Care Foundation; Patti Powell, in memory of her father and namesake of the airfield, Stuart Powell; and the Danville-Boyle County Airport Board of Directors.

Bloch also commented on recent state and federal grants that have been used to improve the airport. He said the more than $600,000 that has been spent on the airfield will continue to benefit the entire community in the future.