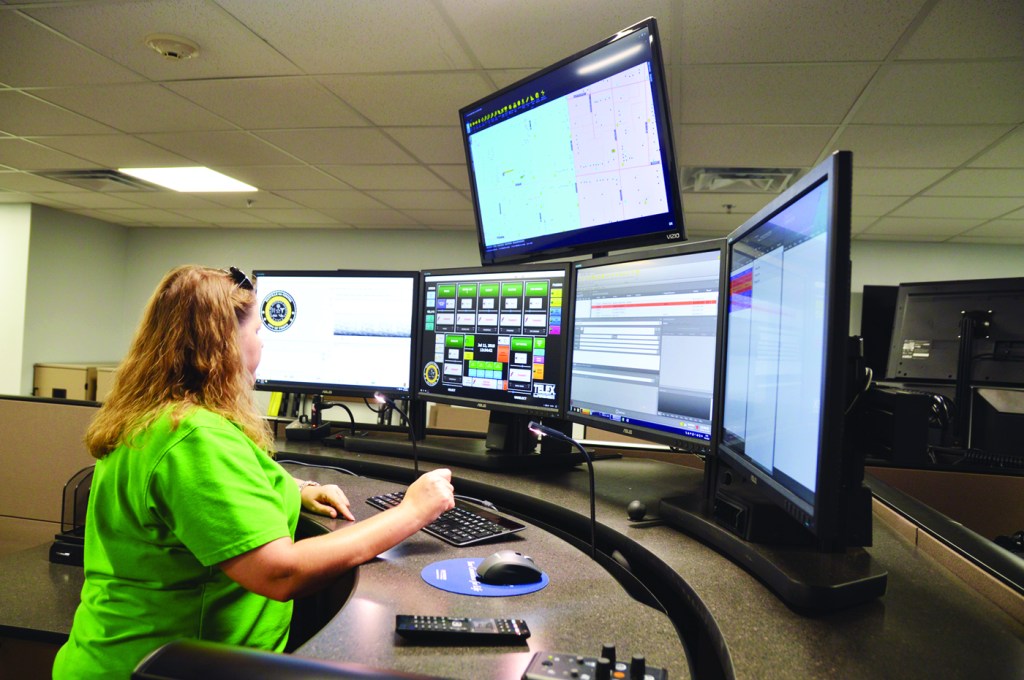 Bobbie Curd/bcurd@amnews.com Communications Director Rebecca Hafley demonstrates how the new dispatch terminal desks will raise up in case employees want to stand during their shift. They also lower to the ground.

Danville’s new 911 center is expected to be up and running next week. It’s been one heck of a planning process, says Danville Police Chief Tony Gray — about five years in the making. 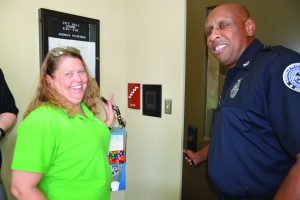 Bobbie Curd/bcurd@amnews.com
Communications Director Rebecca Halfey and Police Chief Tony Gray get a chuckle when the new, secure keypad entrance to the 911 center doesn’t recognize the chief’s key. “See? I told you it was secure,” Gray joked. It has its own entrance just inside the side door of Danville City Hall, leading to the basement.

Gray, Nick Warren and Rebecca Hafley met to offer a tour of the new secure center, soon to be home to dispatchers in the basement of city hall. It has its own secure keypad entrance, just inside the side doors off the main parking area.

Chief Gray found out just how secure it was when the keypad didn’t recognize his key. “See? It won’t even let me in,” Gray joked as the other two laughed.

As the city’s IT director, Warren has been involved in the logistical move of all the technical gear aiding dispatchers to deploy emergency responders to calls. The system has received a major upgrade, something Hafley — as communications director — says will be immensely helpful to dispatchers in their daily duties.

“The actual picking out of equipment and all of that has been about two years, or two budget cycles,” Warren said.

The room is set up with three dispatch areas, complete with furniture that has built-in lighting, fans and heaters. The top of the desks raise to where dispatchers may stand and work if they desire. Or the desks even lower to the floor, Hafley said.

Dispatchers will now use a  keypad and headset to operate the phone and the radio, which cuts down on background noise and controls the screen without having to move a cursor and click on “answer” when a call comes in.

Each phone call can be recorded separately. Hafley and Gray say this is a huge benefit — if they are asked to retrieve a 911 call for whatever purpose, it can sometimes be difficult and time consuming to find an individual section. Under the old system, multiple calls would sometimes be recorded in a single file.

Hafley said the new setup will reduce lots of time-consuming duties. The general public probably doesn’t realize how much the center does as far as providing court information to many different people — the county attorney, commonwealth’s attorney and Kentucky State Police, for example.

“That’s me off the radio and in my office when we need to do that,” Hafley said. 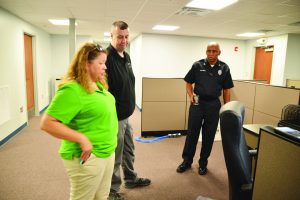 Bobbie Curd/bcurd@amnews.com
Communications Director Rebecca Halfey, from left, IT Director Nick Warren and Police Chief Tony Gray, all with the City of Danville, discuss the implemenation steps of getting the new 911 center together in the basement of city hall.

With the new system, court information will be much easier to gather.

The radio consoles, CAD (computer aided dispatch) and a huge mapping system are now all contained within one integrated system.

“There is one keyboard, one mouse,” Hafley said. At the old dispatch center, dispatchers use two keyboards and three different mouses.

“We’ve all been trained on this new equipment. Everyone, tentatively, will move in on July 18,” Hafley said. Warren cautioned that’s only if everything tests out well over the next few days.

“We’re very excited about it, although I was hoping not to move again,” said Hafley, a veteran dispatcher