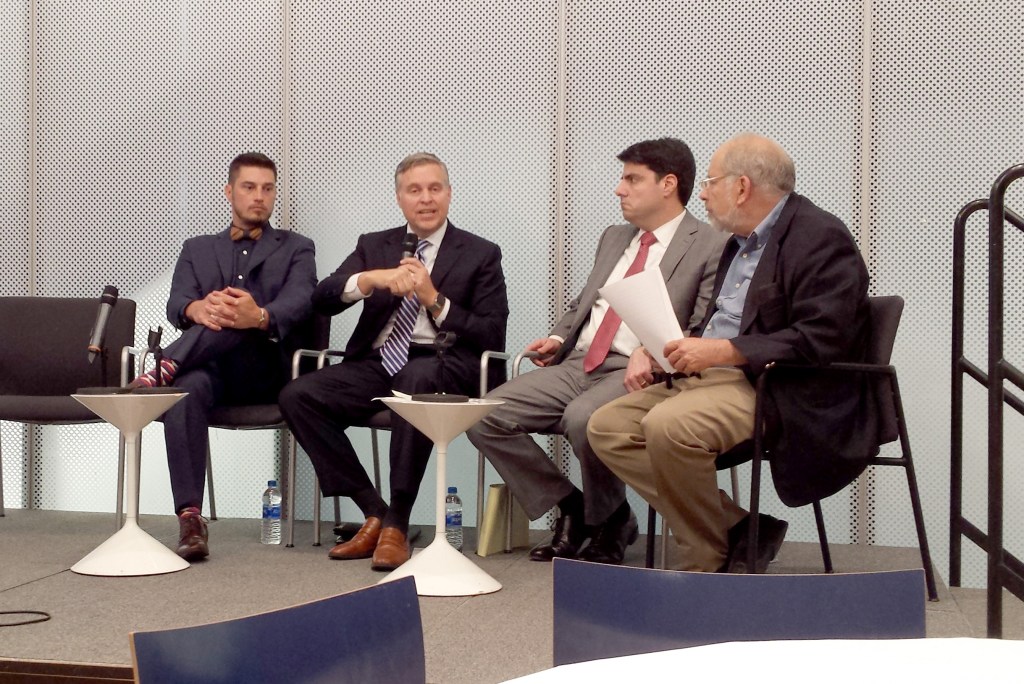 Ben Kleppinger/ben.kleppinger@amnews.com Kentucky Justice and Public Safety Secretary John Tilley, second from left, speaks during a panel on the politics of jail and prison reform at the John Jay College of Criminal Justice in New York City July 11. Tilley participated on the panel with John Bauters, director of government relations at Californians For Safety And Justice, left; and Georgia State Rep. Chuck Efstration, third from left. The panel was moderated by Stephen Handelman with John Jay's Center on Media, Crime and Justice.

Kentucky has seen some setbacks recently in efforts to reform its criminal justice system and keep its jail and prison population under control. But the window for reform is not yet closed, said John Tilley, secretary of Kentucky’s Justice and Public Safety Cabinet.

Tilley spoke about Kentucky’s courts and jails during a conference on criminal justice last week at the John Jay College of Criminal Justice in New York City. He was one of three on a panel discussing the politics of reform.

Tilley told 28 jails and justice reporting fellows gathered for the conference that Kentucky has had “a story of hope and some despair” since about 2010.

At that time, when jail populations around the country were already skyrocketing, Kentucky was seeing even larger increases: “Kentucky’s growth rate in prisons was nearly quadruple the national average,” Tilley said.

That made Kentucky a “poster child” for the national incarceration problem in a study by the Pew Charitable Trusts.

“The good news is we are no longer that poster child because of some reforms,” Tilley said.

One of those reforms was the Public Safety and Offender Accountability Act, passed by the Kentucky legislature in 2011.

“… the law concentrates expensive prison beds on serious offenders, reduces recidivism by strengthening probation and parole and establishes mechanisms for measuring government progress over time,” according to a brief at the time from the Pew Charitable Trusts.

The act was projected at the time to reduce Kentucky’s prison population by more than 3,000 over a decade and save an estimated $422 million.

Tilley said initial reforms came about because the problem of over-incarceration made itself felt in Kentucky before it was apparent in other areas of the country.

Tilley said many in Kentucky understood the need to “treat people rather than incarcerate them.”

In more recent years, further reforms have stalled and some reforms already on the books have been rolled back, Tilley said.

Tilley later held up House Bill 333, passed in 2017, as one example: “Overall, the bill was very positive and helpful in combating opioids,” Tilley said. “However, one provision eliminated an important distinction between commercial drug traffickers and low-level peddlers, who sell small amounts to support a personal habit. The provision made all drug exchanges, including low-level peddling, a Class C felony – up from a Class D. That means that someone selling an amount equivalent to two Sweet’N Low packets is now possibly subject to the same penalties as a true commercial trafficker.”

Reform is made difficult by the fact “it only takes three or four voices in a 138-member legislature in the House and Senate to derail any good efforts,” Tilley said.

Gov. Matt Bevin and many throughout his administration want to improve re-entry services, addiction treatment services, mental health care and more. “But our legislature has pushed back,” he said.

“When we’re talking about politics, it only takes a few. So you’ve got to be outraged. Ben Franklin once said, ‘the only way to get there is when those who are unaffected are just as outraged as those who are.’ And that’s how we get there.”

Tilley said the public’s opinion about jail reform is “not that different from the rest of the country” — many in Kentucky understand that idea that jailing more people doesn’t solve anything.

“I think that ground is soft for that, but all it takes is a couple of tone-deaf legislators,” he said. “Let’s be honest. You’ve seen that at the state and the local and the national level about people who are going against the grain right now.”

Asked after the conference about which legislators might be hindering reforms, Tilley said, “This point was more of a general observation than a criticism of anyone specific. It’s certainly true that every reform effort has detractors, and generally speaking, it’s easy for a small number of opponents to have a disproportionately negative impact on legislation. Our task ahead is to continue educating as many people as possible about the benefits of strategic reforms, which have helped other states lower both incarceration and crime rates simultaneously.”

Tilley pointed to a December 2017 report from Kentucky’s Justice Reinvention Work Group — of which he is a member — that made 22 recommendations for policy changes.

“Kentucky’s prison population is projected to grow 19 percent in 10 years, adding over 4,400 beds, at a cost of more than $600 million dollars to taxpayers,” according to the report.

The 22 policy recommendations “would avert 79 percent of the projected prison population growth, and save nearly $340 million in projected prison costs over the next ten years,” the report claims.

But legislators “rejected all 22,” Tilley said.

“That still has momentum, by the way,” Tilley said of money bail reform. “That will come back. I think we’ll get something done on that.”

Tilley said Kentucky had 37,000 low- to moderate-risk offenders in 2016, who spent an average of 109 days in jail. Many of those people were being held because they couldn’t afford relatively small money bail amounts. Keeping those 37,000 people in jail cost an estimated $125 million.

“In a state like California, that’s a drop in the bucket,” Tilley said. “To the four and a half million people in the state of Kentucky, it’s not.”

Tilley said elected leaders and other leaders at the local level are often on board with reforms to the use of money bail.

“The real opposition comes from judges who think they’re having their discretion removed in terms of a release decision — that there’s some risk instrument … some machine that tells me I’ve got to release this person,” Tilley said. “… The research is very clear. The best decisions come from using science along with professional discretion. So I’ve tried to make sure judges understand nobody is suggesting they have to give up their discretion … use your common sense, you can deviate.”

Cherise Fanno Burdeen, CEO of the Pretrial Justice Institute and one of the speakers during the two-day conference, said courts often use money bail as a way to ensure detention of people because they don’t have an alternative method available. In states where the use of money bail has been reformed such as New Jersey and New Mexico, the changes gave judges “a legal way to detain the one or two out of every 100 that need to be detained.”

Tilley responded, “We’re not going to ignore whatever happened in those states. In fact whatever we are building looks like those two (New Mexico and New Jersey). I think any package that would eliminate the majority of money bail or go to more of a — I just call it a public-safety-based system instead of a money-based system — would include preventative detention.”

“You have to sell that some people who do pose the greatest risk to your community should be preventatively detained if they meet certain criteria,” Tilley continued. “Now the Rubik’s Cube is: Where is that line? And who do you want to detain when they’re innocent until proven guilty? That’s what makes it difficult.”

Tilley said there are already “ongoing talks” involving prosecutors and judges on how to build such a new system.

“There are a number of judges who are very much for it, but there are some judge who have friends in high places who are opposed and … still can’t get over this idea that they’re having their discretion taken from them,” he said.

Tilley said he’s worked on criminal justice issues for 25 years and is pleased to see that while Kentucky’s reforms may have stalled, the chance for further reform is not off the table.

“I thought this window would be closed by now and it’s not,” he said.

After the conference, Tilley said further reforms at the state level will be on the table during the 2019 legislative session.

“Kentucky still has the ninth highest rate of incarceration per capita and the second highest rate of children with an incarcerated parent. Meanwhile, our prisons and jails are reaching capacity,” Tilley said. “Those trends are unsustainable, so we plan to continue pushing for measures next year to lower incarceration while increasing public safety. That could include raising the threshold for felony theft or moving to a risk based bail system, among other things.”

• Women in jail: “For Christ’s sake, one out of every three women incarcerated in this world is in the United States. In Kentucky, 33,000 children are impacted by incarceration — the second-highest rate in the country. We have a growth rate for females five times that of our males right now. We continue to put women in prison at a higher rate than men, at least in terms of a growth rate.”

• Chamber of Commerce: The Kentucky Chamber of Commerce stepped up in a big way when reforms initially began and has continued to help with reforms because it recognized early on that over-jailing is “decimating the workforce.” The chamber is working with the Department of Corrections’ re-entry division to “begin re-entry on day one” so that people are ready to work and contribute to society when they are released.

This story has been corrected to reflect the correct name of the Pew Charitable Trusts.