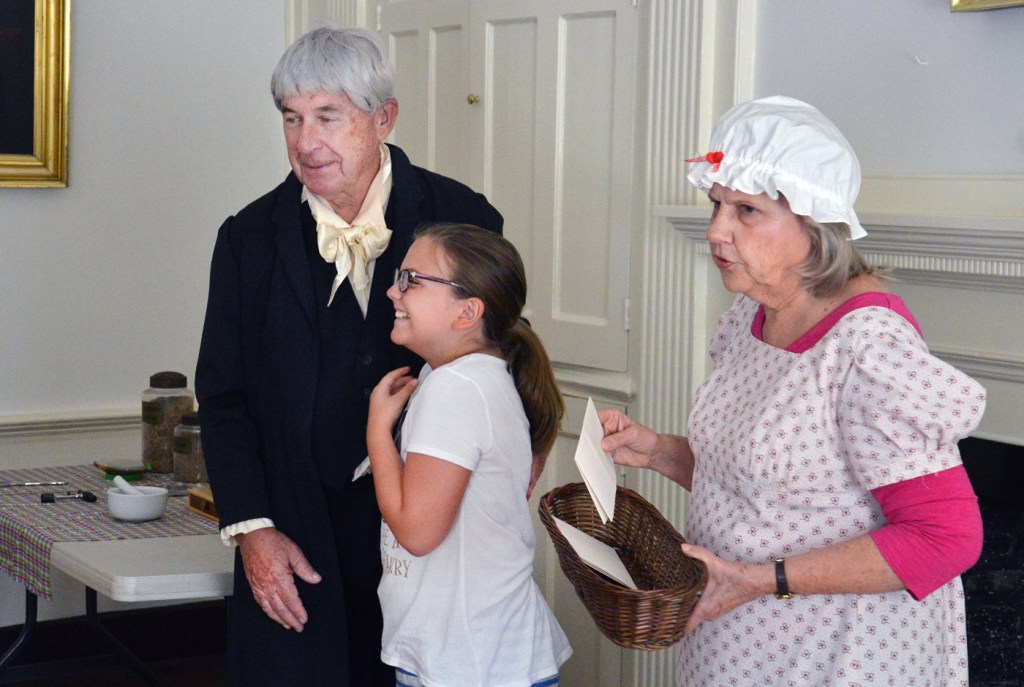 During the presentation Friday morning, Meg Wilson, center, pretends to have a sore throat in front of Dr. Ephraim McDowell (Dr. Phililp Eskew) as Linda Porter asks the group what herb would have been used to make the patient feel better.

The late Dr. Ephraim McDowell came to life on Friday for visitors of the McDowell House Museum.

Dr. Philip Eskew was dressed in a custom-made black suit, made to look like the one Dr. McDowell wears in a portrait from about 200 years that hangs above the mantle in the museum. Eskew spoke to three groups of people throughout Friday morning and early afternoon about the life of Dr. McDowell and his surgery on Jane Todd Crawford.

His “assistant” was Linda Porter of Danville, who is a member of the Garden Club of Danville and on the board of managers of the McDowell House. She also oversees the gardens of the museum, including the medicinal garden, where she raises herbs that Dr. McDowell would have used on his patients. 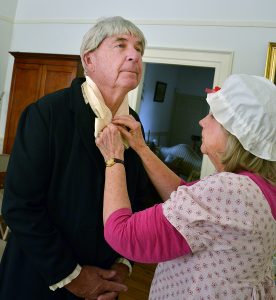 Photo by Robin Hart/robin.hart@amnews.com
Dr. Philip Eskew, a retired obstitician/gynocologist from Indiana, has his tie adjusted by his “assistant” Linda Porter, of Danville before speaking to a group at the McDowell House Museum about the life of Dr. McDowell.

Dr. Eskew is a retired obstetrician-gynecologist from Indiana; he enjoys bringing “history to life,” by dressing as the famous Dr. McDowell and telling his story in first person.

Friday’s presentation was just a “mini” lecture Eskew said, because most of the attendees were children. But he also gives a more intense lecture where he uses slides and even covers his face in pale makeup to make it look “like I came back from the dead,” Eskew said.

Porter said once when they were working together as Dr. McDowell and his assistant, a child quietly stood by her side and whispered, “Is he a ghost?”

While talking to the children and some older adults during one of the sessions Friday, Eskew said Dr. McDowell was famous all over the country and he treated many well-known people.

One of the people McDowell performed surgery on was an 11-year-old boy who traveled with his father from Tennessee for treatment. Eskew said McDowell removed a bladder stone and the boy recovered. He went from being a sickly little boy, Eskew said, to president of the United States. His name was James Polk.

Eskew said he enjoys portraying Dr. McDowell and has done it since 1992. “It’s a hobby,” he said. “It’s a great story and it’s fun to tell.”

Porter brought examples of herbs used to relieve common ailments during the time McDowell was treating his patients. These included rosemary, sage, thyme and marjoram. She told the group there weren’t pharmacies, so people relied on dried herbs infused into teas for stomach aches, coughs and headaches. Marjoram was chewed to numb the mouth if they had a toothache.

“Simple symptoms is the only they could treat,” Eskew said. 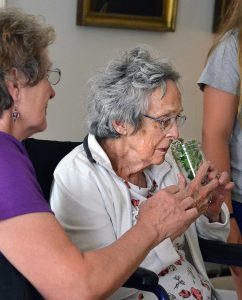 Photo by Robin Hart/robin.hart@amnews.com
Joan Stafford, of Danville, sniffs a jar of marjoram that Linda Porter brought from the McDowell House medicinal garden. Her daughter, Cinthia Stafford Wolfe, left is visiting from Michigan.