Wild and beautiful: Danville couple has turned their yard into native plant sanctuary 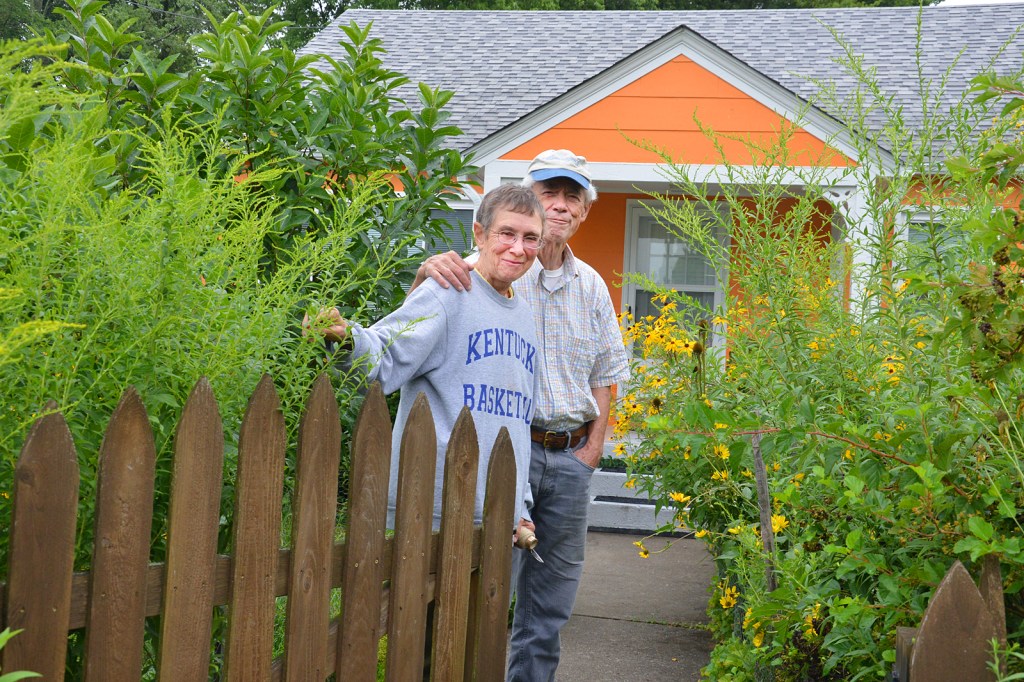 Photos by Robin Hart Jim and Gloria Maender in front of there home on Walnut Street in Danville.

Jim and Gloria Maender may have the brightest house in Danville and the most inviting yard for birds, bees, butterflies, chipmunks, rabbits, shrews, voles …

At first glance, passers-by may think the bright orange cottage has been left unattended all summer. Willowy sweet susans drape over the front walkway; a spreading fringe tree stretches up and out, and patches of goldenrods next to the fence sway in the breeze, nearly ready to burst open with vibrant yellow flowers.

But the Maenders work in their yard every day. 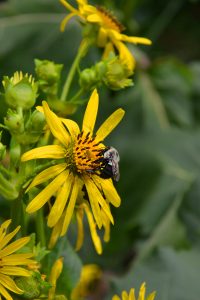 A bee takes nectar from a cup plant

They tenderly tie up lanky flower stems that need a little extra support; carefully mow walking paths with only shears or a reel mower; and place chicken wire around plants and trees that take root on their own.

Jim and Gloria agree they want their property to be “friendly to the wildlife.”

“We’re giving this to Mother Nature,” Jim said. “All her buddies can come here and use it at their will.”

Gloria said their yard also seems to have become a nursery for birds. She said many times, they’ve watched as adult birds bring their young to the yard for its safety under the cover of plants as they go out foraging for food.

As they toured the lot next to their bright orange cottage on East Walnut Street, the couple was excited to share how so many of their native trees and plants are thriving. Many of them weren’t even planted from seedlings, but from acorns and seeds they’ve collected on hikes through the Central Kentucky Wildlife Refuge and at Perryville Battlefield.

Three persimmon trees grown from seeds picked up at Perryville — two males and one female — are doing great, and the female is already producing fruit. Gloria said she found another sapling that sprouted in the yard and she hopes it’s another female.

A paw paw tree has produced its first fruit too, she said as she crouched under hanging limbs to point out a single paw paw.

Jim enjoys the trees, especially in the winter when the trunk and limbs are visible and their shape and forms can be admired. Inside their home, he has many photo albums of pictures of trees he’s taken over the years when they hiked at many locations.

“We’ve really planted an arboretum,” Jim said. “And we wanted to enjoy the flowering plants while we could,” before the trees take over the space.

One of his favorite trees they planted from a single acorn is a bur oak. It already seems to be a dominant form in the space.

Back against a fence there’s a patch of thorny trees named “Devil’s walking stick.”

Looking around the wild space, Jim said, “It drives you nuts to make this place bigger than it is.”

He said they’ve consolidated as much as possible, “to express what’s interesting to us in a small space.” 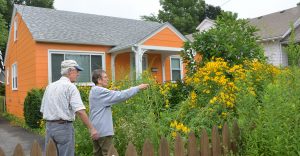 Everywhere you look, there are shrubs, trees, wildflowers, grasses of all shapes, sizes and colors. There are patches and niches for all kinds of native plants, Gloria said.

And if some of the flowers becomes overcrowded, “They can fight it out amongst themselves,” Gloria said.

Their yard has attracted a tiger swallowtail and monarch butterflies, as well as ruby-throated hummingbirds. And just yesterday, they watched a brown thrasher chase away a cat bird.

Jim said if he and Gloria were younger, they would have moved to the country, but circumstances kept them in town.

When they retired, the couple “self-moved” here from Tucson, Arizona, in 2011. Gloria was the outreach coordinator for the U.S. Geological Survey biology group. Jim had worked at the Arizona Department of Agriculture.

They both grew up in Tennessee and met at the University of Memphis after Jim returned from service during the Vietnam War.

In an anthropology class, the two found out they had a lot of common interests — wildlife and plant life. Gloria said their dates consisted of hiking and birding — but nobody believed that’s what they were spending their time doing, she fondly recalled.

After they married, Gloria and Jim also shared their love of bicycling. Their first big biking trip was in the 1980s when they spent two and a half months pedaling from their home in Washington State down to the Mexican border, back up to Canada then home.

Another adventure was a three-and-a-half-month bicycling tour of the British Isles.

When it was time to retire, Jim and Gloria did a lot of research and decided Danville was the place to call home. They decided they wanted a little something different than Tucson.

Today, the couple still enjoys touring Danville on their 3-speed bikes and hiking the miles of trails at the wildlife refuge and Perryville Battlefield.

And as Jim said, their “flamboyant southwestern color home”  in central Kentucky is a bright spot on cold gray winter days when the flowers gone and trees trees are bare.

Jim Maender stands in the side yard of his home on Walnut Street, surrounded by hop horn bean plant, a hemlock tree and Devil’s walking stick trees.

Behind the front gate of their home on Walnut Street, Jim and Gloria Maenders point out sweet susans and goldenrods.

Jim and Gloria Maender talk about how the birds love to come to their yard and feast on the wildflower seeds all fall.

Jim and Gloria Maender in front of there home on Walnut Street in Danville.