Fair with a heart: Carnival company opens its gates for those with special needs 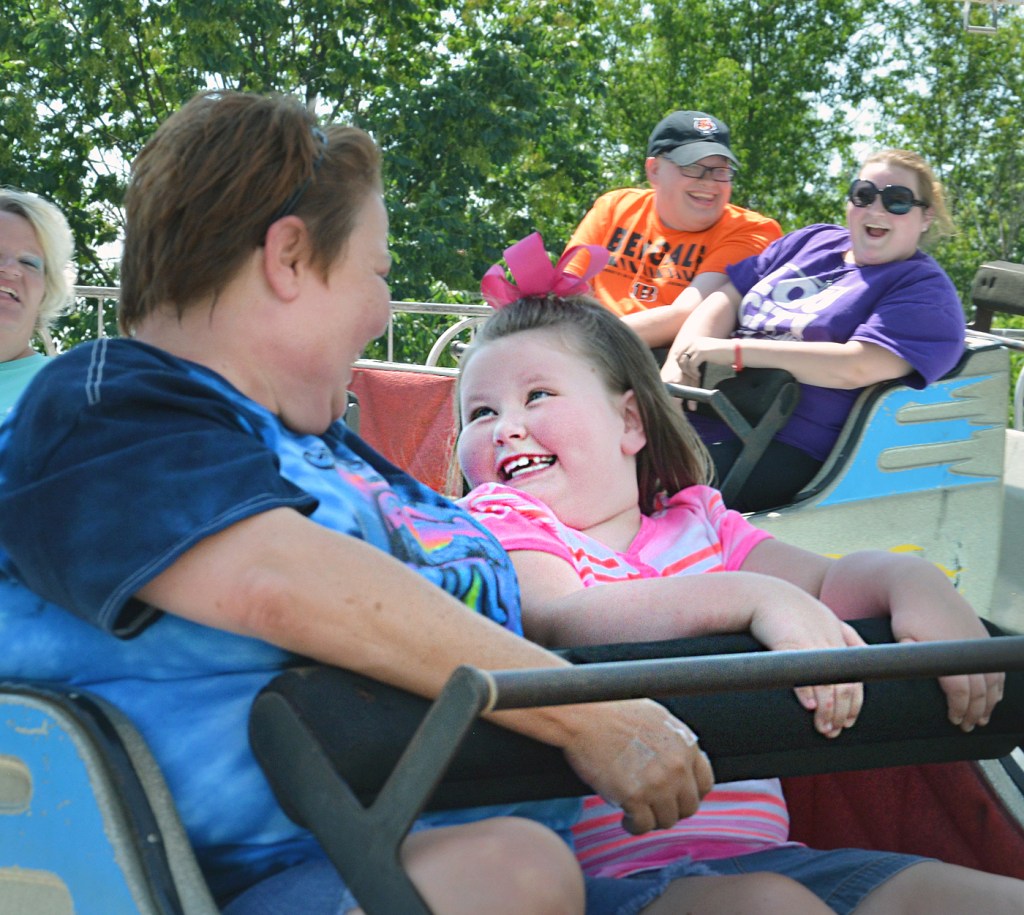 Emily Hall shares an exciting ride with her aunt, Lisa Cummins on the Silver Streak ride. (Photo by Robin Hart)

The carnival set up at at the Mercer County Fair this week opened its gates for a free special event for people with special needs Wednesday afternoon.

John and Angel Young, owners of Forever Young Amusements, have a tradition of giving an afternoon of free carnival rides to people of all ages with disabilities and their families and caregivers, wherever their carnival is located. 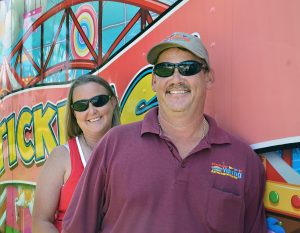 Angel and John Young are owners of Forever Young Amusements, which is the carnival set up at the Mercer County Fair and Horse Show this week. On Wednesday afternoon, they opened up the carnival and let people with disabilities and their families enjoy the rides for free. (Photo by Robin Hart)

John is also a native of Harrodsburg and graduated from Mercer County High School in 1991. His wife Angel said inviting special-needs adults and children to enjoy an afternoon at the fair was John’s idea. And when they come to Harrodsburg for the fair, “it’s twice as special to him,” she said.

Wednesday, from noon until 2 p.m. John and Angel, along with about 30 of their employees plugged in and turned on the rides and welcomed everyone who had been invited to have some fun.

It was a typical summer afternoon at the county fair Wednesday, with the sun shining brightly and colorful rides spinning and twirling as riders squealed with delight. Groups of friends laughed together and moms took lots of photos.

The only things missing were long lines of people waiting to climb aboard the amusements; no loud music was playing; no one was yelling out for fairgoers to play games at their booths for prizes; and visitors weren’t rushed to get on or off the rides. 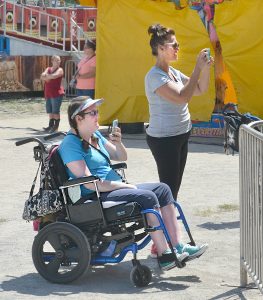 At left, Shelbi Hopper and her mom, Tammi Hopper take photos of friends and family riding the merry-go-round. (Photo by Robin Hart)

Sometimes, it took a little more time to get someone out of a wheelchair and onto a ride, and occasionally, extra care was needed to help someone get situated and buckled safely into a seat. But caregivers and ride operators all seemed to enjoy the smiles they got in return.

While attending school in Mercer County, Angel said John took a few special education classes due to his dyslexia. He also grew up seeing first-hand what the challenges of having a disability could be — his mother cared for many foster children and those with special needs.

When John stopped riding around in a golf cart for a few minutes at his carnival Wednesday, he said, “Adults are who I really put this on for.”

He said there is always something going on for special-needs kids, but nobody wants to do anything for the adults with special needs. 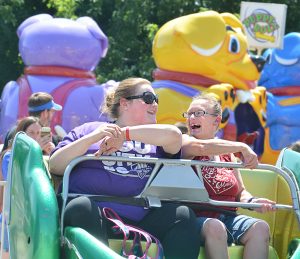 “But in their minds, they’re 6 or 7 years old. It’s sad when people consider them adults and they’re really not. It’s all about the adults, but we’re not going to turn away any of the kids,” John said.

“I like to make them feel special,” she said.

Malary Ward, originally from Buffalo, New York, said this is her first season working with Forever Young Amusements. While set up in Owensboro last week, Malary said on the day the carnival was open for those with special needs, “I had a ball! I didn’t want them to leave.” 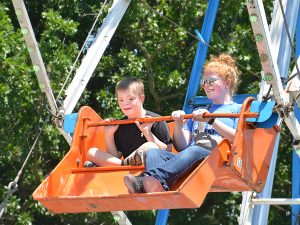 Angel said their company travels through Kentucky, Tennessee and Georgia from Valentine’s Day to Thanksgiving and they always give some free time to the organizations who take care of adults and children with special needs. All the rides are offered, she said, and they can be slowed down to accommodate everyone.

She said the favorite rides seem to be the big Ferris wheel, the merry-go-round and the “puppy” rides.

Lee Ann Divine, who works at the Mercer County Elementary School, was standing at the entrance waiting on students and families who were invited to come to the fair for the afternoon. 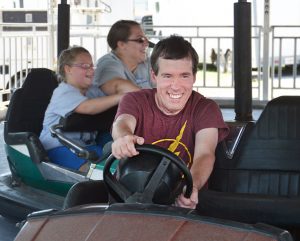 She said usually, these students can’t enjoy the fair with their families because “there’s too much sensory overload.” However, with fewer people in attendance and plenty of time to get accustomed to the sight and sounds, they are able to enjoy the afternoon with their family.

Sandy Richardson, of Harrodsburg, was visiting the fair with her son Carson.

“This is just a good thing. It’s less hectic without the big crowds and without the stress. I appreciate what they (Forever Young Amusements) do,” she said.

As Angel was talking about her husband’s passion for helping those with disabilities she said, “It’s always touched his heart. It melts his heart, too” when he sees someone enjoying the rides who normally wouldn’t be able to.