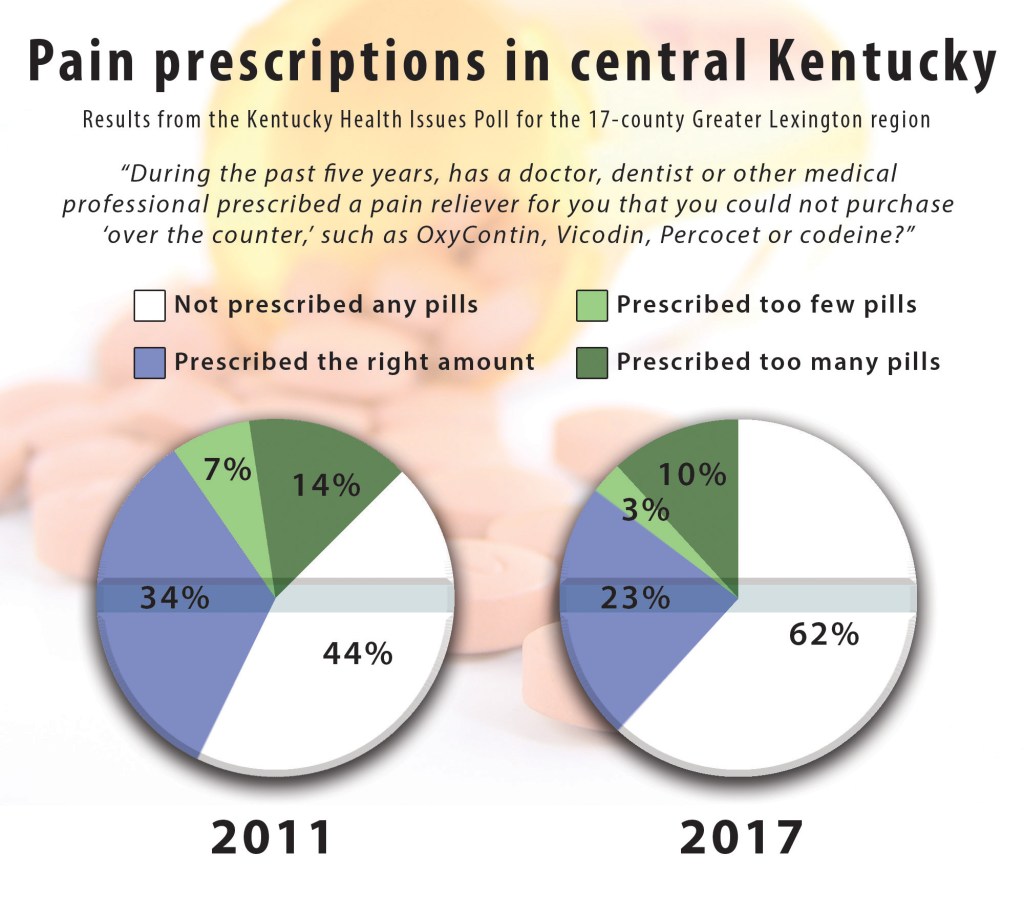 FOUNDATION FOR A HEALTHY KENTUCKY

LOUISVILLE — Adults getting prescriptions for pain medication dropped significantly in the Greater Lexington region of Kentucky from 2016 to 2017, as it did for Kentucky as a whole, according to the latest Kentucky Health Issues Poll (KHIP) report. While 55 percent of Greater Lexington Kentucky adults asked in 2011 said they were prescribed pain pills in the prior five years, that percentage dropped to 36 percent in 2017.

Statewide, 34 percent of Kentucky adults said they got prescriptions for pain meds in the five years up to and including 2017, a drop from 55 percent who responded similarly in 2016.

The same report found that the Greater Lexington area continues to struggle with problems resulting from the use of heroin, but the percentage of adults reporting that family members or friends are struggling with prescription drugs or methamphetamines declined.

KHIP, an annual opinion poll of Kentucky adults, is funded jointly by the Foundation for a Healthy Kentucky and Cincinnati-based Interact for Health. This latest report highlights responses to a wide range of health questions from adults in a 17-county region surrounding Lexington.

The KHIP Greater Lexington Kentucky spotlight also found continued majority support for certain tobacco-control measures, including a statewide smoke-free law and a law prohibiting use of any tobacco products on school campuses. That said, support for a statewide smoke-free law dropped to 74 percent in 2017 from 82 percent in 2016. In addition, the report found a significant drop in unfavorable opinions about the Affordable Care Act among Greater Lexington adults, mimicking lower statewide disapproval of the health care law.

• 87 percent favor court-mandated treatment for those with a first or second drug offense; 81 percent statewide agreed with that approach.

• 74 percent support a statewide smoke-free law, up from 61 percent in 2011, when KHIP first asked this question; 71 percent statewide support such a law.

• 87 percent also support schools taking a more active role in helping families get health care services for their children, up from 72 percent in 2009, the last time this question was asked; in 2017 statewide poll results showed 84% support this approach.

The Kentucky Health Issues Poll, funded by the Foundation for a Healthy Kentucky and Interact for Health, is conducted annually to assess what Kentucky adults think about a variety of health topics affecting the Commonwealth.

The 2017 Kentucky Health Issues Poll was conducted from Oct. 24, 2017, to Dec. 2, 2017, by the Institute for Policy Research at the University of Cincinnati. A random sample of 1,692 adults from throughout Kentucky was interviewed by telephone. This included 861 landline interviews and 831 cell phone interviews. Of these, 331 respondents resided in the Greater Lexington region.

A copy of the Greater Lexington Kentucky regional KHIP report is available at http://bit.ly/2LHVG8J. The data on which this news release is based is from the Foundation’s Kentucky Health Issues Poll, unless otherwise noted.