Hogsett renovation cost goes up by $1.5M, Part of a trend: Construction prices skyrocketing around the state 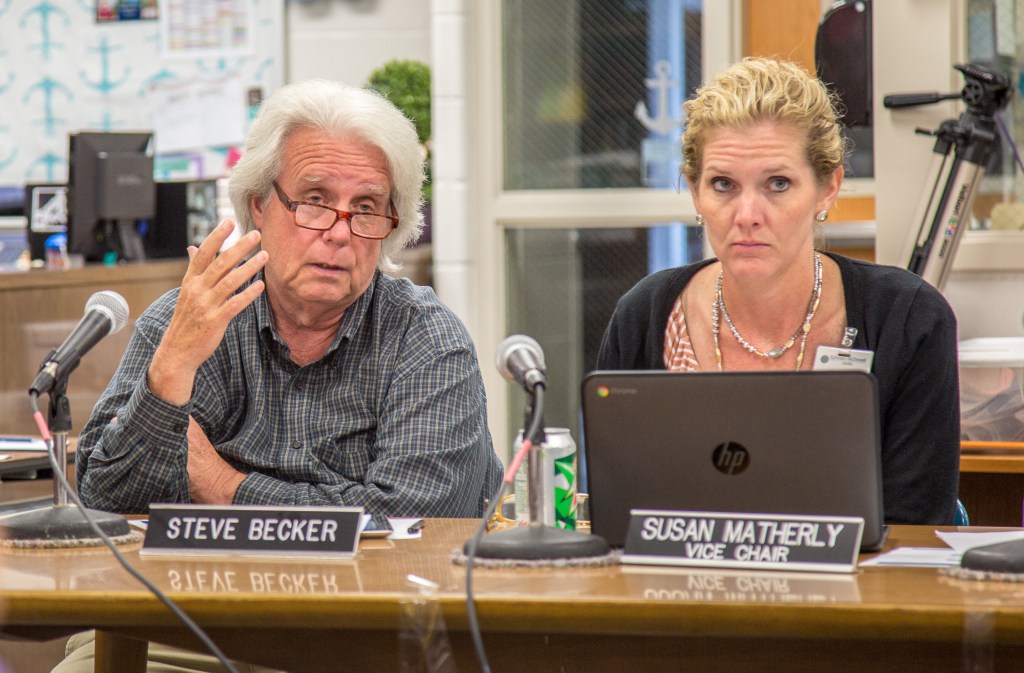 Ben Kleppinger/ben.kleppinger@amnews.com Danville Board of Education member Steve Becker, left, talks about various factors that may have contributed to a higher-than-expected pricetag for renovations to Mary G. Hogsett Primary School during Monday night's school board meeting. At right is Vice Chair Susan Matherly.

It may cost Danville Schools almost $1.5 million more than previously expected to renovate the Hogsett school.

“It’s an incredible increase,” school board member Steve Becker said. “… For a small district like ours, whether you have the bonding capacity or not, that’s a huge increase.”

Board members approved the low bid for the school renovation project Monday night. Marrilla Design and Construction offered to complete the overhaul of the former elementary school for an estimated price tag of $7.57 million. After adding in the architect/engineer fee, which was also higher than initially predicted by more than $100,000, and other bond and construction costs, the total project cost is now projected at $8.88 million.

The cost to the school district is projected at $8.05 million, according to data from Director of Finance Paul Dean. That’s because the School Facilities Construction Commission is covering $830,270 of the cost. The SFCC provides financial assistance to public school districts for capital projects; it’s funded through Kentucky biennial budget, Dean said.

Originally, Danville expected the total project cost to be $7.16 million, with the school district on the hook for more than $6.56 million of that, according to Dean’s data.

The low bid represents a 22.6-percent increase in cost to the school district.

There’s no one reason that bids came in so much higher than initial estimates, but it’s not a problem unique to Danville, said Steven Ward, an architect with Studio Kremer Architects, the firm in charge of the project for the district.

“Really, every project we have bid since March has come up at least 20-percent over-budget, except for one — and that’s the outlier, really,” Ward said. “… That’s been consistent in almost every project that we’ve seen, not just by us but in other districts and with other architects’ projects.”

“It’s just kind of coming from all the different pieces of the industry,” he said.

Board member Becker said he has talked with representatives from other school boards and they have confirmed that “tremendous increases” in construction prices are everywhere right now. Some believe steel tariffs put in place by the Trump Administration are affecting costs; others say contractors are worried about costs in the future and so are increasing prices now, Becker said.

“We have no assurances that’s it’s going to stay at the $8.8 million. You know how that goes,” he said.

Board members couldn’t find a better alternative than accepting the higher price Monday night. Dean confirmed the prices are still “well within our bonding capacity,” meaning the district will be allowed to and can afford to take on the debt required for the project.

Board member Susan Matherly wondered if there were any “big-ticket items” that “may seem over-the-top at this point,” which could be removed to lower the price. Ward said the project is already fairly straightforward. The only way to shrink the project would essentially mean going back to square one — start with consultants again and come up with an entirely new plan with a smaller scope. But that process would take a month to complete and there could be no guarantee that estimates of cost-savings would actually happen once new bids are put in.

Dean noted if the timeline on the renovation is pushed back by a month, it adds a risk that interest rates would go up, which could cancel out savings.

Board member Troy McCowan said he didn’t want to take that chance.

“I think we need to push forward now with what we’ve got and not risk bumping it up any more,” he said.

Superintendent Tammy Shelton said the board should also remember that the project needs to be completed before the 2019-20 school year or it would affect the district’s preschool through first-grade students. Those students will be attending school in the former Jennie Rogers Elementary building this school year while the renovations are completed.

Officials have said the Jennie Rogers building is not ideal — “It will be cramped. It will be very cramped, but it will only be one year,” former Superintendent Keith Look said in March. But it will allow completion of the Hogsett renovations in one year instead of two, provide “significant cost savings” and prevent contractors from trying to renovate the building while students are in it, Look said previously.

At Monday’s board meeting, Shelton said she believes construction prices will continue to rise, meaning any delay could lead to even higher prices.

“I don’t see it getting better,” she said.

Board members approved the low bid unanimously and waived a discrepancy in the bid submission — the general contractor failed to include two copies of the bid proposal. Dean said the next-lowest bid would have cost the district about $213,000 more.

The board also approved an initial financial document for a plan to build a new softball field. The contract with architectural firm Carman estimates it could cost $665,000 to complete.

Before approving the plan, board member Becker said he was “a little gun shy” because of what happened with the cost on the Hogsett renovation.

Dean said the district isn’t committing itself to spend anything yet. It can move forward with the process and get bids. If the bids aren’t to board members’ liking, they have the option to drop the project.