Tariffs have farmers counting their beans: Trump’s trade war is affecting Kentucky’s number-one crop, but what does the future hold? 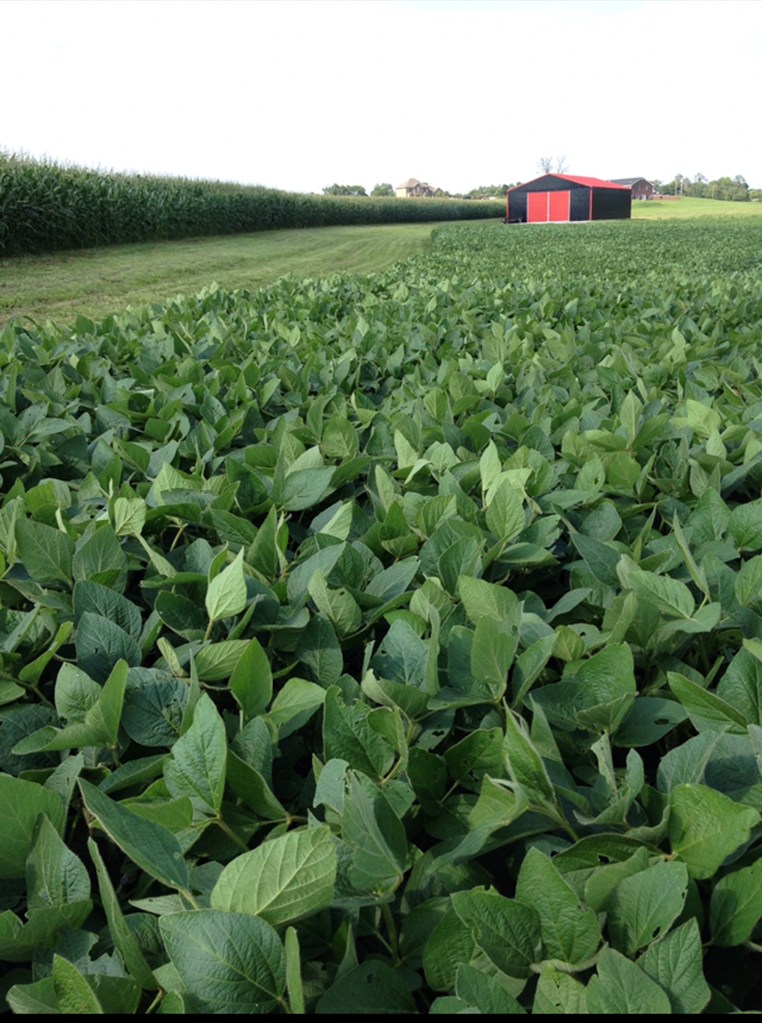 Editor’s note: This is the first story in a special two-part In Focus series about newly imposed tariffs and how they are affecting farmers. Check back tomorrow for viewpoints from other types of farmers and a specialist who tracks commodity programs and what they pay farmers.

The Trump administration’s tariffs have now affected solar panels, washing machines, steel, aluminum and more. But they’re also affecting farmers, many of them in Kentucky.

In May, Trump’s administration imposed tariffs on about $200 billion worth of Chinese goods; China came back with stiff tariffs of its own, which led to soybean prices being the lowest they’ve been in a decade. On Wednesday, Trump proposed more than doubling the tariffs — from 10 to 25 percent — as a response to China’s retaliation.

Soybeans are now Kentucky’s top crop, bringing in $992.2 million a year, based on 2017 information from the U.S. Department of Agriculture. According to the Kentucky Soybean Association, there were 102.8 million bushels of soybeans produced in the state last year. 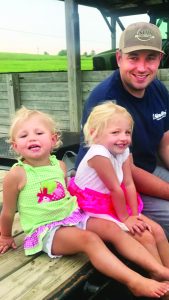 Spencer Sims sits on the back of a trailer on his soybean farm with daughters, from left, Kate Savannah and Emily Grace. “I hope they will still be able to farm one day in the future, if that’s what they want to do.”

The Trump administration has also announced a bailout plan for farmers — $12 billion of emergency aid — to make up for the losses inflicted by the tariffs that many economists say are clearly leading to a trade war. The details of how the funds will be dispersed are still unclear.

“While soybean farmers appreciate the aid — it is only a short-term solution,” says Debbie Ellis, executive director of the Kentucky Soybean Association. “Soybean farmers need long-term solutions, such as expanding trade opportunities.”

The program the administration says it will use is from the Great Depression era — the Commodity Credit Corporation, a government assistance program designed to make up for the shortfall to farmers losing overseas sales due to the tariffs.

As a cash crop in Kentucky, soybeans are used to make vegetable oil, animal feed, food products and hundreds of industrial uses. Even the hulls of the bean are used in feed and water purification research. Ironically, according to the soybean association, soybeans made their debut in America in the early 1800s, aboard a ship from China.

Soybeans or soy products are everywhere: in the ink base for over 80,000 newspapers in the country; biodiesel fuel; the protective coating on CDs; lecithin, a main ingredient in cooking spray, which also helps keep chocolate creamy; building materials used for countertops and flooring; and infant formula, sunscreen, lip balm, hand lotion and other makeup products.

“2018 projected numbers are similar — which means this is about a $200 million loss for Kentucky,” she says. She provided a graph, sourcing the National Agriculture Statistic Service,  showing the annual contribution of the production of soybeans to the state’s economy includes more than 9,611 jobs, $1.48 billion in output (value of goods and services) and $582.6 million in gross domestic product.

Spencer Sims is a soybean and corn farmer who lives in Mercer County. He farms there, in Salvisa, as well as in Washington and Anderson counties. He said it’s definitely been tough for farmers, who have been working to adjust to the lower price the beans are going to bring in now.

“With any commodity — corn, soybeans, wheat — we start out the year looking at the price set on the Chicago Board of Trade, so we know about where we’re going to be per bushel,” Sims said.

There’s a lot of “figuring” in this process, though — “What we’re going to sell the product for … based on seed cost, herbicides, whether you’re on rented or owned property, fuel prices …”

Sims said they began planting soybeans in May, when the crop was supposed to fetch about $10.30 a bushel. As of Thursday morning, that price was down around $9.25.

“The good thing is we were proactive about it, we were able to get the crop contracted at a profitable level … but we still have another half of this crop, on what we’re seeing, bushel-wise, we’re looking at about $8-$8.50 a bushel.”

Sims is a member of the soybean association board and said they are hearing from some insiders that there are talks ongoing with China on new trade deals. “We’re hopeful there will be something coming through that will be a lot better.”

Although given Trump’s decision Wednesday to propose changing the tariffs from 10 to 25 percent, it doesn’t seem those talks have gone anywhere, just yet.

As far as the $12 billion set aside to supplement soybean producers in federal emergency aid, Sims said no one knows quite yet exactly how that will be allocated. And although it sounds like a huge amount, it’s really not.

“As far as we know, each producer will have to sign up for it. But, right now, if we kind of look at the numbers, it’s going to be such a small amount that each farmer will receive, it will not make up for the loss in the market,” he said.

Sims breaks it down like this: If a farmer figures on a 40-bushel yield and multiplies that by $10 a bushel (60 pounds), it’s about $400 gross per acre. If the price drops to $8 a bushel, farmers have to grow 50 bushels to make up for it, he said.

“I don’t see it as a left or right thing. We — farmers — we want China to buy our soybeans,” Sims said. “Sixty percent of our soybeans in 2017 went to China. That’s a big market. If you’re selling newspapers, and 60 percent of your customers are gone overnight, you’ll worry about your career.”

However, he’s holding out hope the tariffs will ultimately succeed down the road. 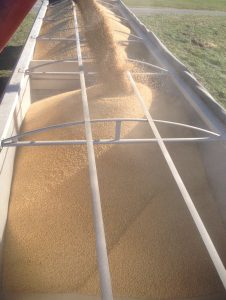 “For farmers, though, in the long-run I think it will be a really good deal.”

Sims has farmed tobacco and cattle all his life, but just began with soybeans six years ago to gain some leverage after the tobacco buyout.

“As things changed with the buyout in 2004, farmers had to diversity. Soybeans are a great way to do it, but taking $2 off a bushel really stresses the farmer out.”

Right now, farmers are having to go through a tough time, but he’s optimistic about the future. When farmers contribute their time to boards, they don’t get paid, he said — farmers are passionate about making differences for the better within their industry.

“I have two little girls. One is 2 and one is 3 and a half. If one day, they decide they want to continue farming, I’d love to see them do it. I want to know we’re going to be sustainable, that we’ll be able to do this for 30 or 40 years from now. We’ve got to have exports.”