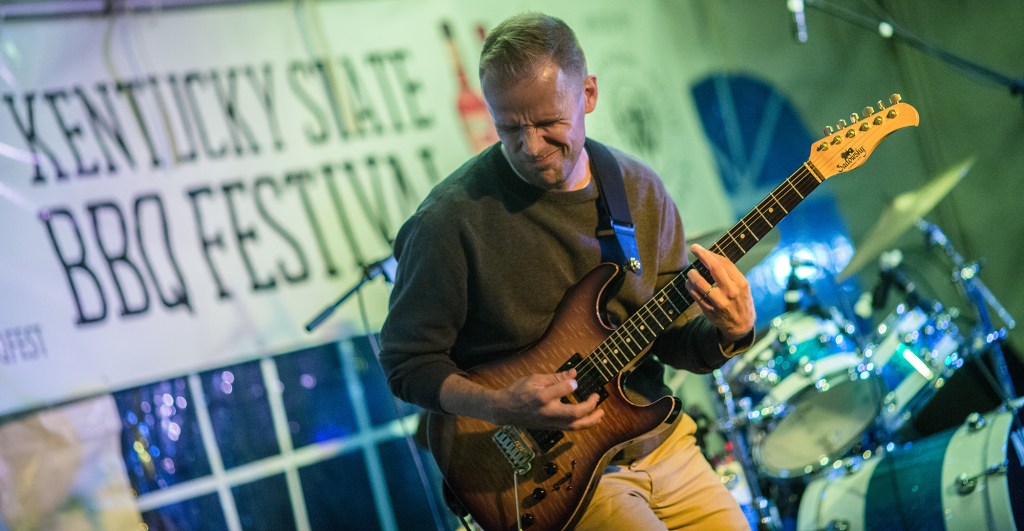 File photo by Ben Kleppinger A guitarist for the band Superfecta performs at the Kentucky State BBQ Festival in 2017.

Although the board says it was “not an easy decision,” the Kentucky BBQ Festival will now be charging a ticket fee for the first time since it was created.

Tickets for the eighth annual festival, set for Sept. 7-9, will cost $5 for a one-day pass and $10 for a three-day pass. But Brad Simmons, a founder of the festival, is urging patrons to purchase tickets online — which takes them to $6.56 for one day and $12.12 for a three-day, due to sales tax and a service charge.

Simmons said they strive to make each year’s festival “bigger and better” than the year before. They don’t want the festival to ever “get stale.”

But to do this, the festival’s expenses, including rental fees, insurance and paying bands are increasing while sponsorships are decreasing, he said. Simmons said it now costs about $80,000 to put on the event.

The festival will have many new features, including professional traffic control and a VIP luau, bourbon class and Bloody Mary Sunday brunch. The festival will once again be located at Wilderness Trail Distillery on Lebanon Road. The distillery donates the space and utilities for the festival. 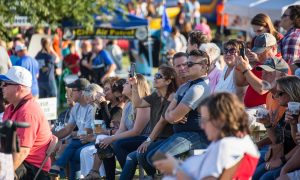 File photo by Ben Kleppinger
Attendees at the 2017 Kentucky State BBQ Festival listen to music on the main stage.

So, the admission fees have been planned to help sustain the annual festival. Kids ages 10 and younger will be admitted free. Parking is free, but when entering the festival, you will be required to show your ticket on your smartphone like you do at airports and concerts, Simmons said.

If you don’t buy tickets online, he said cash will be accepted. Pre-purchased tickets will help make entrance to the festival quicker, Simmons said.

Danville-Boyle County Convention and Visitors Bureau executive director Jennifer Kirchner said “It was not an easy decision for the BBQ Festival board” to decide to have an admission fee. “With shrinking sponsorship dollars and growing expenses, this seems to be a necessary step to keep the festival strong and growing. I realize $5 can make a difference for some folks,” she said. “Events often struggle with the balance of keeping an event free so more people come, but you still have to have a strong revenue source for logistic-type expenses, and they add up quickly. It is a hard balance to find.”

Traffic flow is also expected to be much better this year than last year, Simmons said. Parking space wasn’t the problem; it was getting a large volume of vehicles off of Lebanon Road and into the festival grounds.

He flew a drone over the area three times during peak traffic times and saw exactly what the problem was — people were stopping at the entrance and talking to the parking attendants. “That’s what killed it. It was so obvious,” Simmons said.

To help alleviate this problem, the festival has hired “a professional parking company” and Danville police will be ready and on-hand to direct traffic, he said.

The field where vehicles park is double the size from last year, and it will be mowed, making it easier for festivalgoers to walk through, Simmons said.

Once again, the BBQ festival will use the event to help raise money to donate to the Heart of Kentucky United Way. Instead of having an art auction, like in years past, proceeds from three new VIP ticketed events will benefit the United Way.

The first VIP event begins at 5 p.m. Friday at the distillery, with an opening ceremony and a luau. Tickets are $200 per person plus sales tax and service charge. Only 80 tickets are available.

Jeanna Hutchinson and Ginny Hogue are the VIP events planners.

Hutchinson said celebrity pitmaster Mike Mills will cook an entire hog for the luau buffet. And plenty of tropical-themed side dishes will be catered by Jerry Houck. Music will be provided by a DJ and a cartoonist will be on hand to capture the fun. Each ticket holder will also receive two cocktail vouchers to be used at the luau, admission for the entire 3-day festival and a $10 food voucher to spend at any of the BBQ food vendors. Best of all, Hutchinson said, was that each person will get a bottle of Wilderness Trail Distillery Special Edition single barrel bourbon selected by master distiller Shane Baker that has a label depicting the festival logo and likenesses of each pitmaster in attendance.

Pitmasters will also be at the VIP luau and will sign the bourbon bottles if collectors want them to.

On Saturday from 11 a.m. to 1:30 p.m., the VIP “Whiskey ticket” event takes place at the distillery’s visitor center. A least four master distillers will discuss specific topics, Hutchinson said. The class won’t be a typical “bourbon 101” class or presentation about the history of bourbon, but will consist of a lot of detailed information. There will also be a question-and-answer period following the class, Simmons said.

Tickets are $100 per person, plus sales tax and service charge, and only 80 will be sold. The price includes the panel discussion, tasting of four bourbons and a lunch of pork belly sliders, baked beans and slaw. The Wilderness Trail Distillery Special Edition bottle of bourbon will also be given to the ticket holders.

Hutchinson said the VIP Bloody Mary Sunday brunch will be from 11 a.m. to 1 p.m. Tickets are $100 plus sales tax and service fee, and only 80 tickets are available.

There will be an enormous Bloody Mary bar that will include shrimp, ribs and oysters on the half shell. Other brunch foods will include chicken and waffles on skewers, pastries, bacon wraps, quiches and lots of fruits and cheeses. She said the highlight will be when Leslie Roark Scott of Ubon’s BBQ demonstrates how to make the perfect Bloody Mary. The Wilderness Trail Distillery Special Edition bottle of bourbon will also be given to the ticket holders.

Hutchinson said they realize the ticket prices may seem steep, but the events are going to be very special. Individuals can enjoy being pampered and businesses may want to treat a few of their special customers or employees to the exclusive events, she said.

All proceeds from the three VIP events will go directly to the Heart of Kentucky United Way.

Simmons said the barbecue festival is still in need of volunteers. Anyone can volunteer, he said, and they don’t have to be age 21. He said anyone or any group who wants to volunteer at the festival can email cindy@kybbqfestival.com or rachel@kybbqfestival.com

“It really takes a village” to put on the festival, Simmons said.