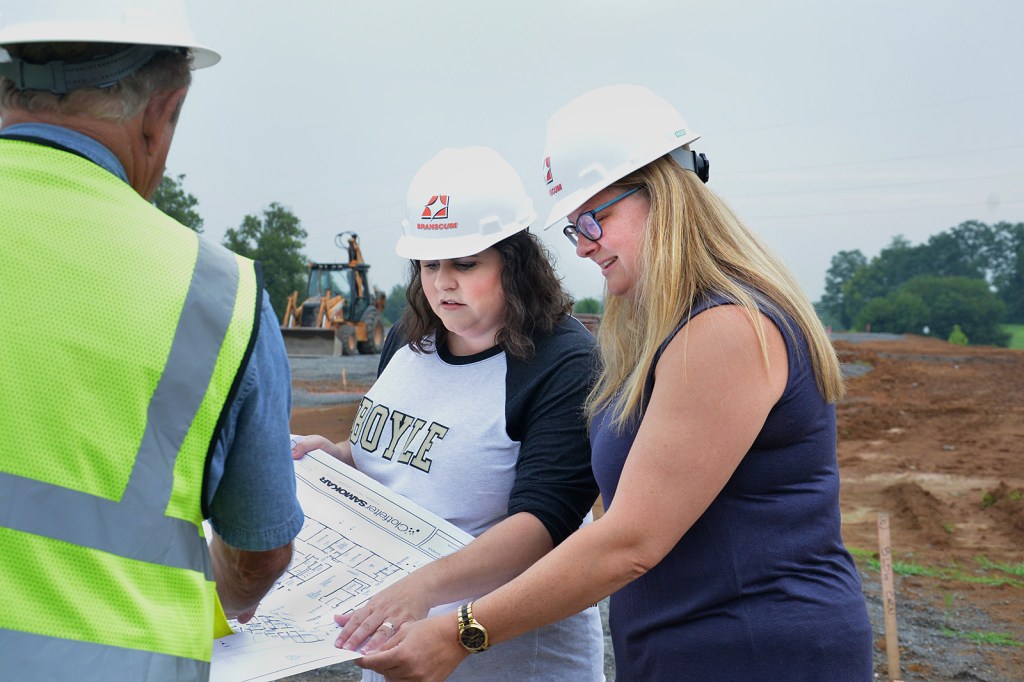 On Friday morning, project supervisor of the new Boyle County Middle School construction project Kenneth Blevins gave a tour of the building site for any school board members and staff who wanted to see the progression so far. This was second tour scheduled in the past three weeks.

The only people who attended this time were board members Jennifer Newby and Laura Guerrant, along with the Boyle Schools Communications Director Jennifer Broadwater. The three women put on hard hats and were unfazed by walking over packed down mud and rock as Blevins talked about the excavated site.

Blevins said the project is taking place on about 22 acres and crews begin working between 7 and 8 a.m.

Pointing to drilling equipment and pipes to be used in the geothermal HVAC system, he explained a company is drilling 92 wells, each 405 feet deep.

“That helps show you the scope and size of this project,” Blevins said. 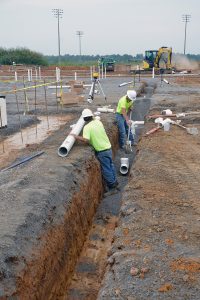 Construction workers lay pipe in a trench at the construction site on Friday morning.

Walking past stacks of steel girders, Blevins said they are going to be the gym’s ceiling. They were purchased early in the project at a lower price than they would be now, Blevins said.

At a site where dozens of small rock piles sat on top clay dirt, Blevins said that’s where the next blast was going to be detonated. He said every pile of rock covered a 4-inch square hole that was 20 feet deep and contained the blasting substance. He said they have strict rules and safety measures are taken when they’re about to set off a blast.

Because he was smiling as he was talking about the detonations, Newby said she could tell he loved watching the explosions, and he enthusiastically agreed.

When the small group reached the auditorium space, Blevins said, “This is going to be really impressive. The walls will be 40 feet tall.”

Looking over the leveled site, Blevins walked over to the edge and looked down on the road leading into Millennium Park. He said there were 17 feet of dirt used to build up the road coming onto the school’s property. After about three weeks of settling, the engineers gave the go-ahead to build on it because it had only settled down about an eighth of an inch.

“I have to give the engineering crew kudos on that,” he said. “I’ve learned more about dirt in the last six months than I ever wanted to.”

Blevins said the property “was great for a farm but horrible for building on.” He said there was a tremendous amount of topsoil that had to be removed before reaching packed clay suitable for construction.

Boyle County Middle School construction supervisor Kenneth Blevins leads a tour of the construction site for school board members who were interested in seeing how the project has progressed.

Steel girders are stacked at the construction site. Project supervisior Kenneth Blevins said they were purchased earlier, before prices began to rise.

Dozens of holes 20 feet deep are filled in with explosives and rock at an area to soon be detonated at the construction site of the new Boyle County Middle School.

Dozens of holes 20 feet deep are filled in with explosives and rock at an area to soon be detonated at the construction site of the new Boyle County Middle School.

This is a section of the wall being constructed for the Boyle County Middle School auditorium.

In Focus: The invisible problem, one in six Ky.…